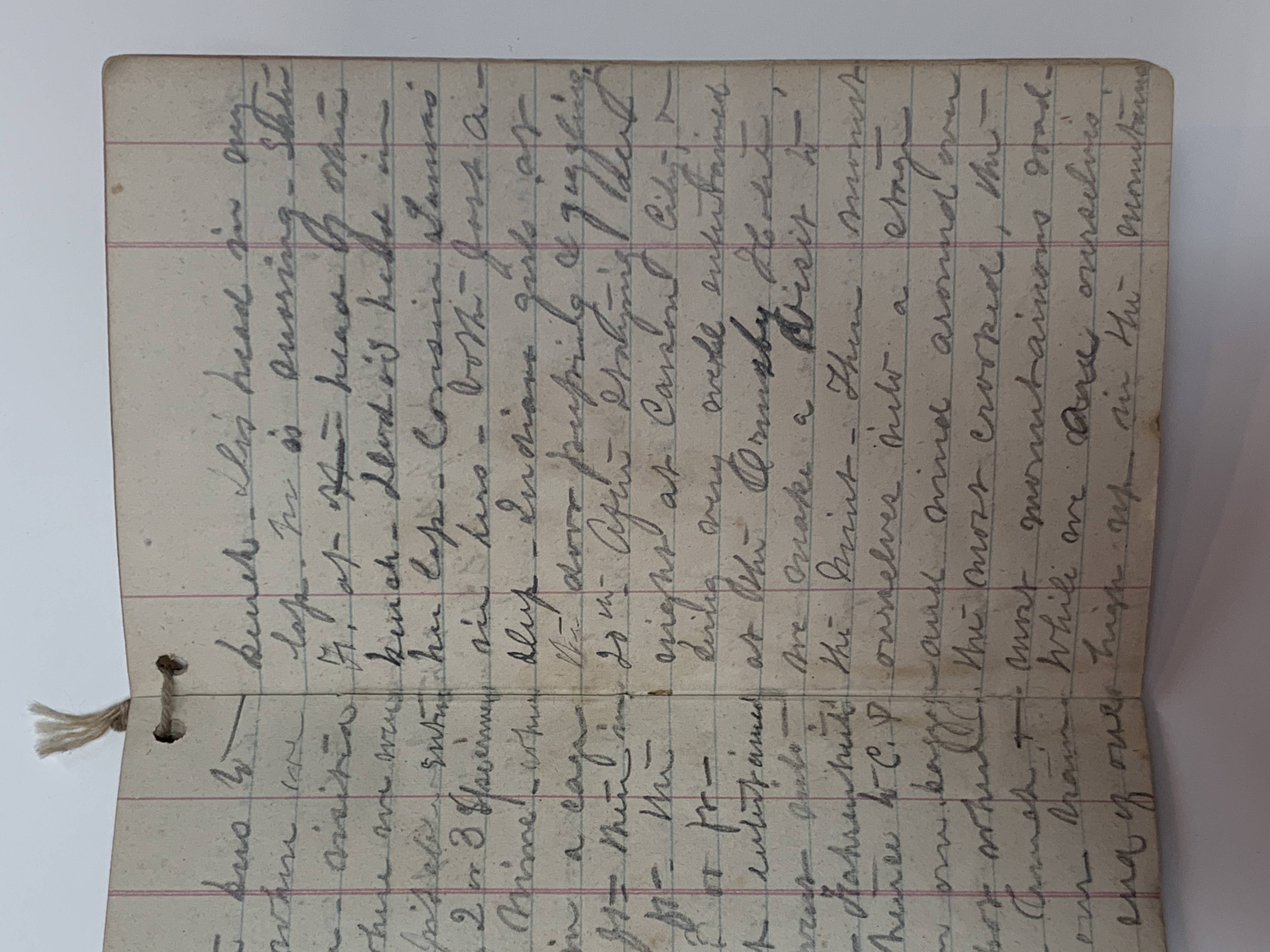 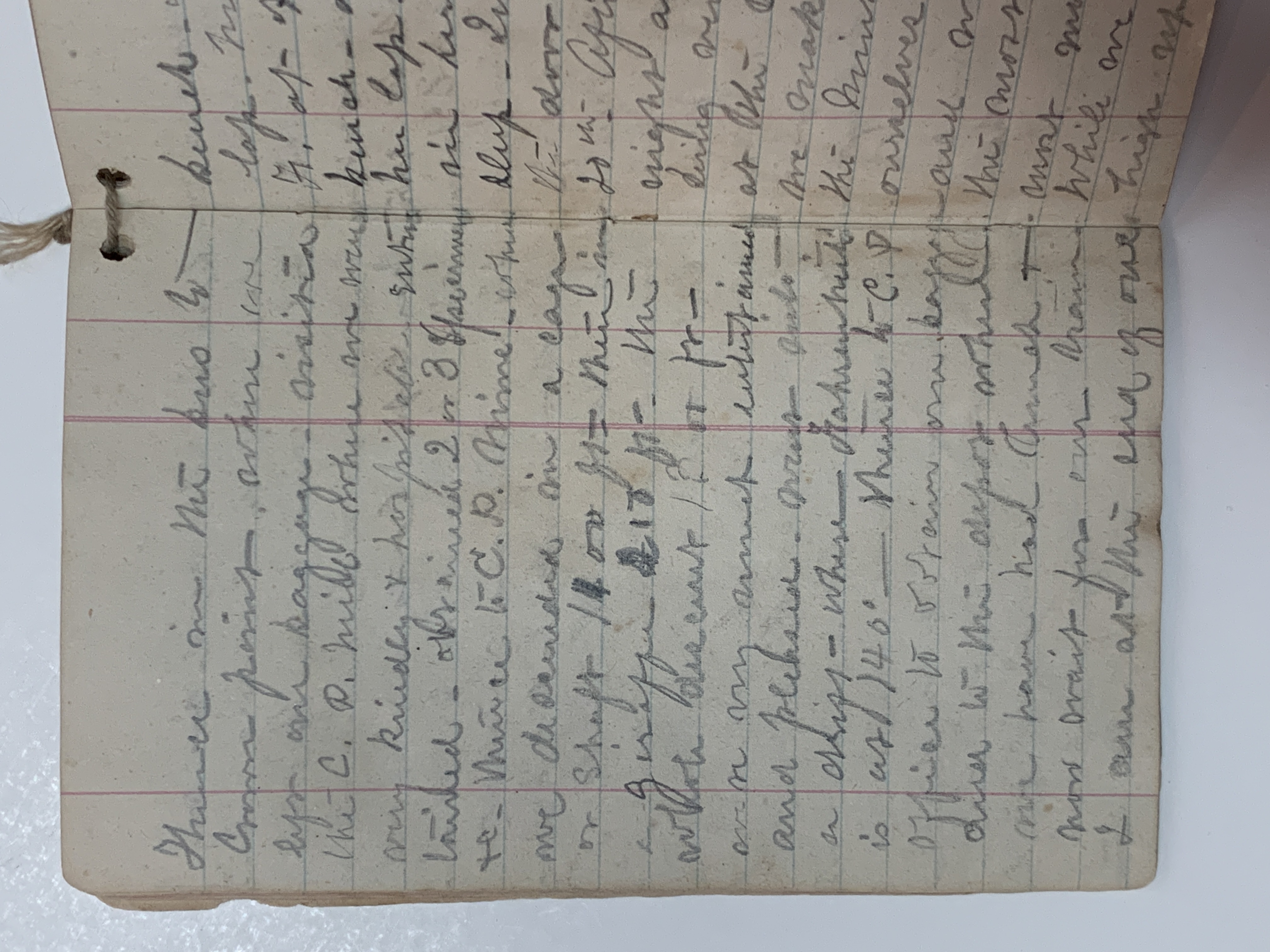 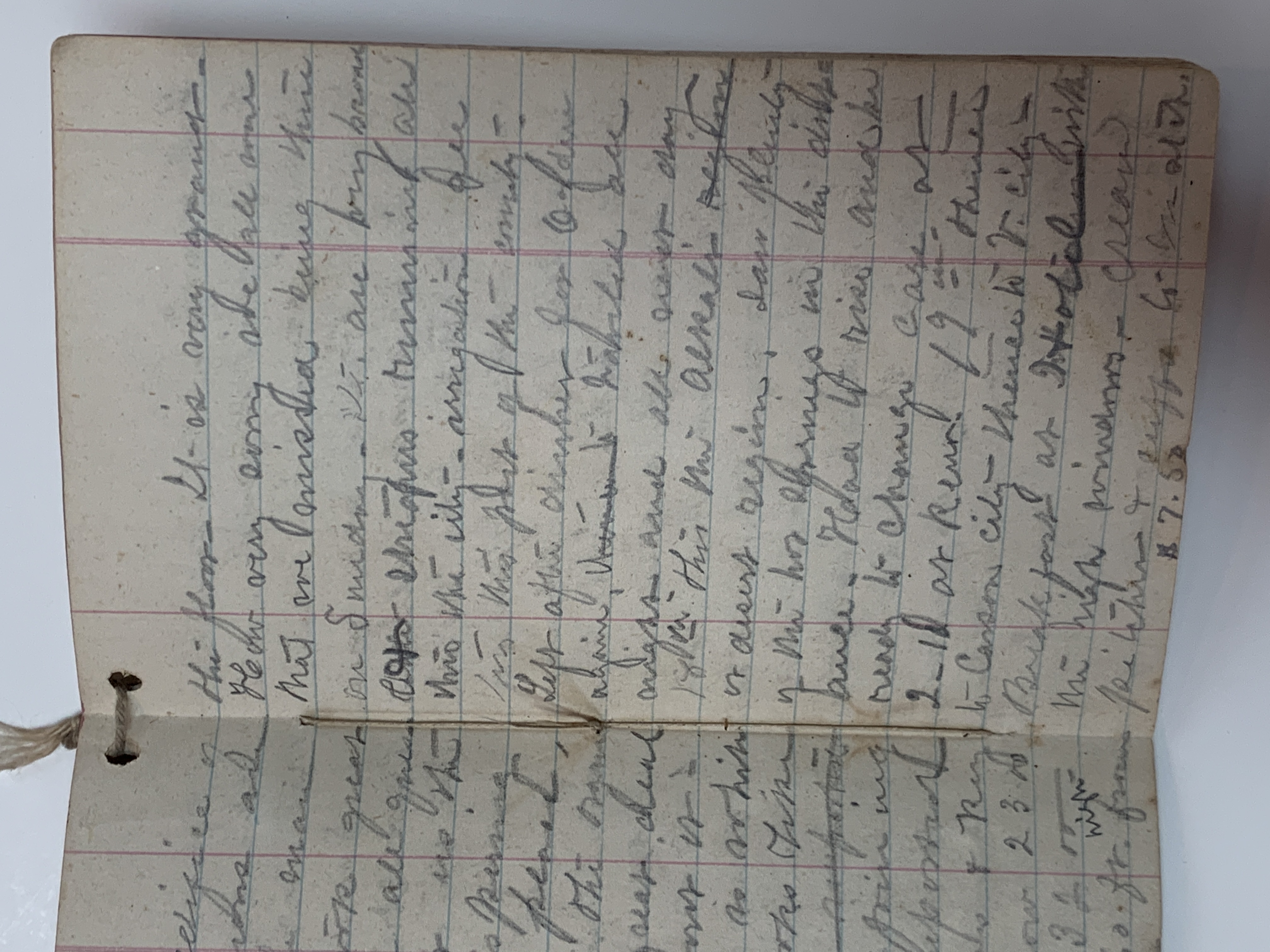 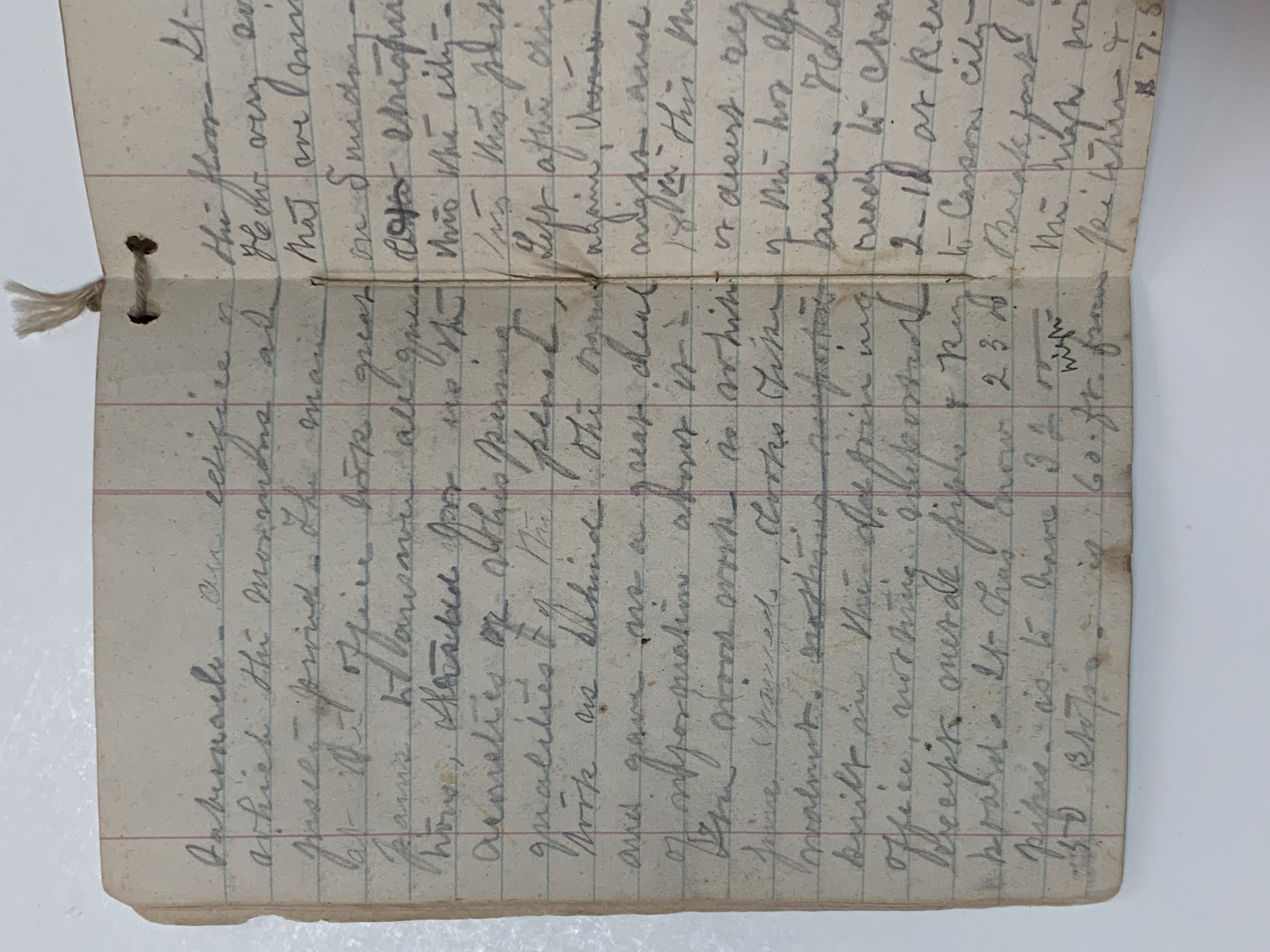 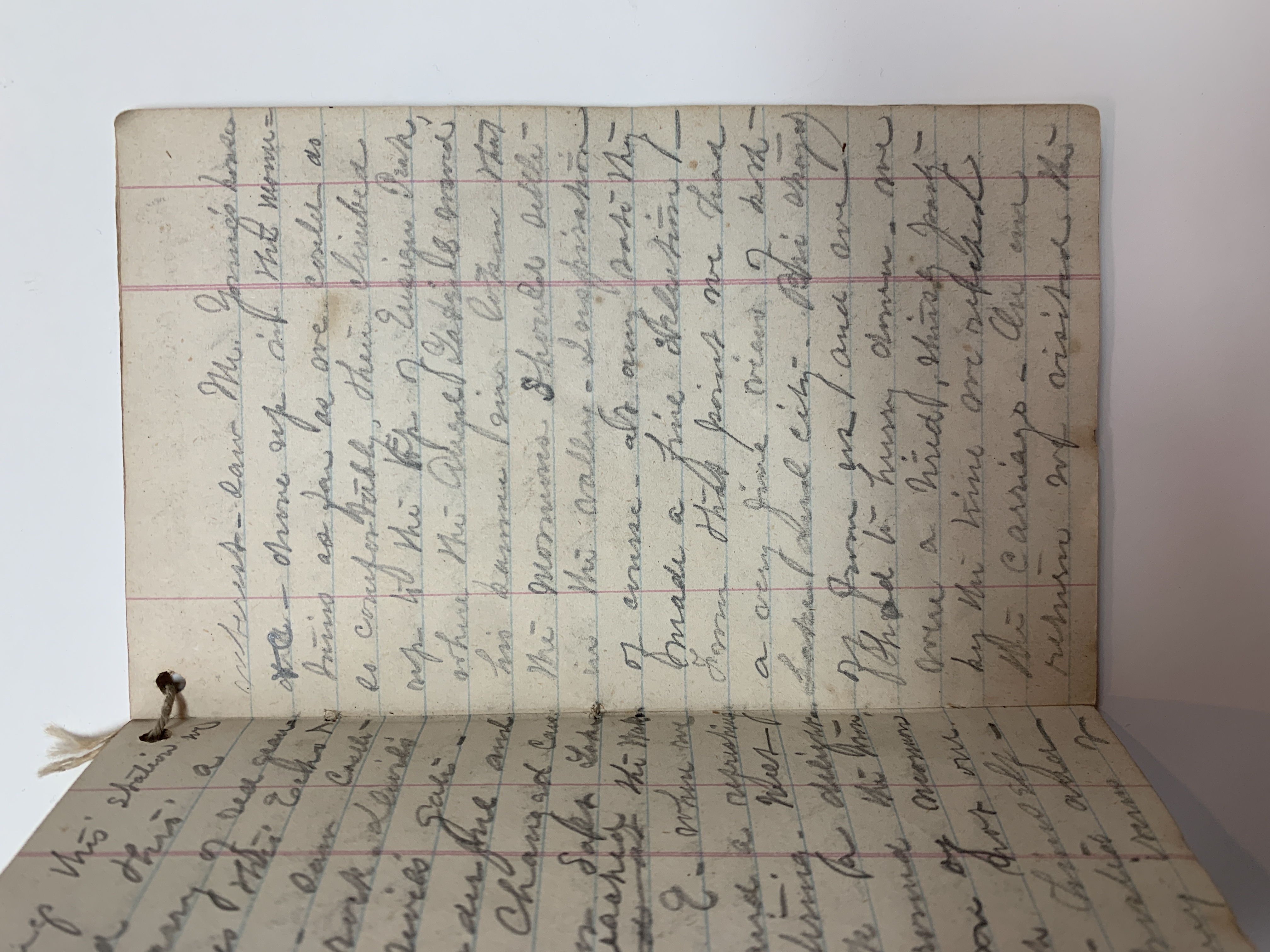 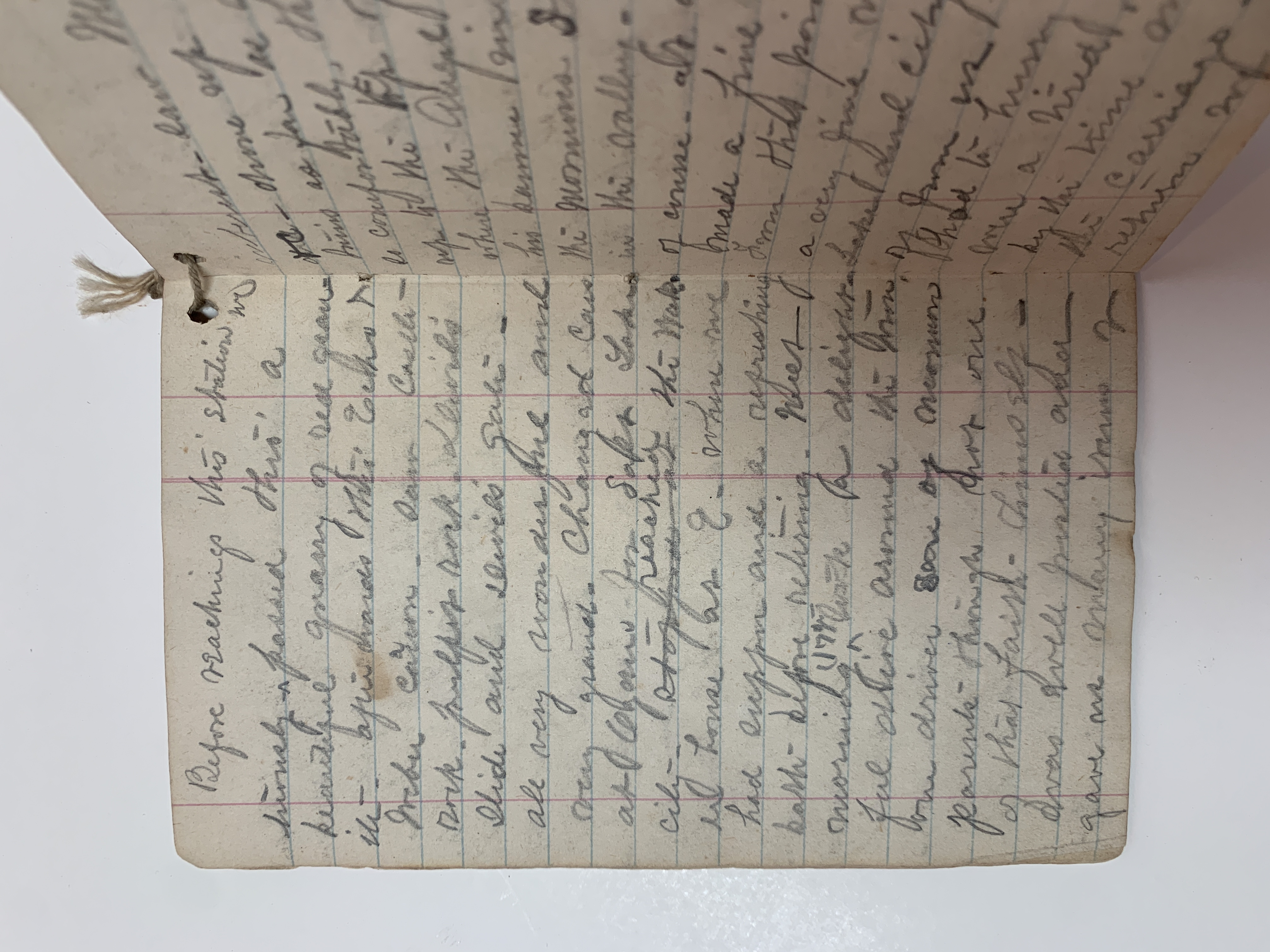 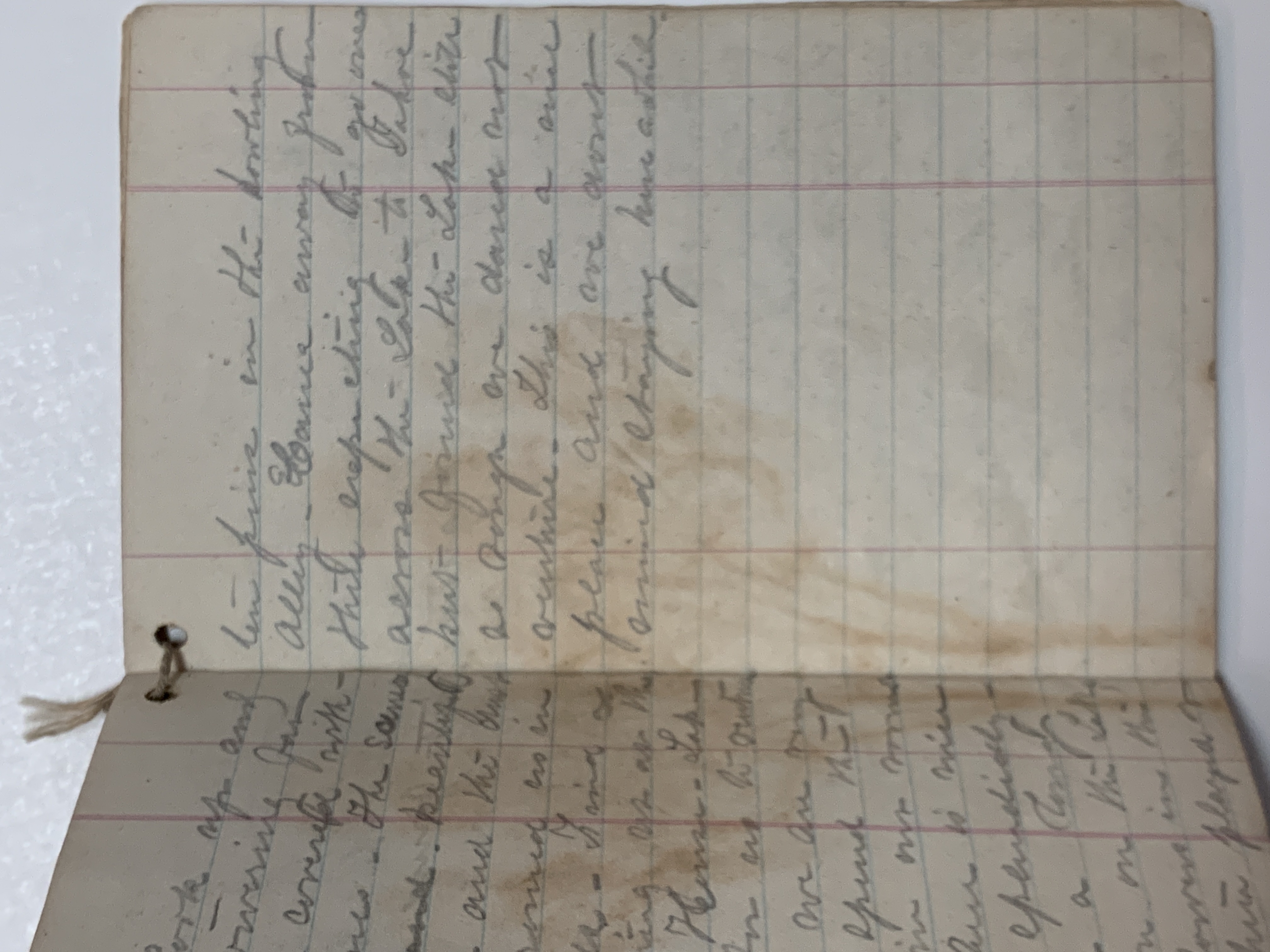 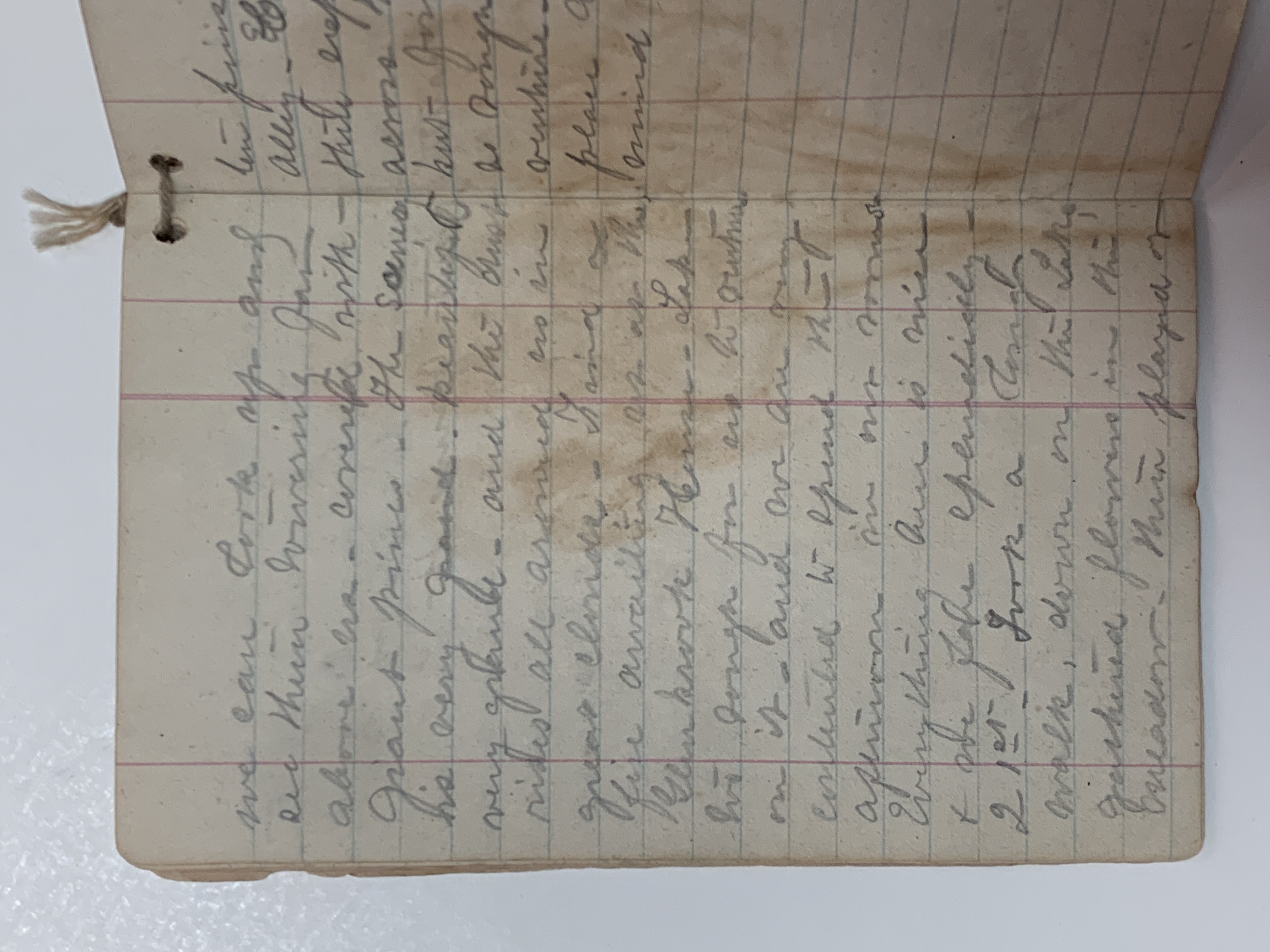 12mo format manuscript on wove lined paper, consisting of a single signature of 40 pages, inscribed densely in pencil throughout, approximately 3,500 words, outlining three different trips taken while the writer was a single woman.

The first recounting a journey of August 22-September 10, 1872 from Sterne's home in St. Louis, MO toward Lake Superior by way of Chicago, IL; Escanaba, Michigan; Ishpeming, MI; Duluth, MN; Hinckley, MN; Green Bay, WI: Oconomowoc, WI; Minneapolis, MN; Fort Snelling; Milwaukee, WI, and back to St. Louis, traveling by train and boat primarily, with mention of successful post-fire rebuilding going on in Chicago, a trip to a peat mine, the Calumet copper mine, and an iron blast furnace.

The second trip June 13-21, 1873 from St. Louis to Council Bluffs, IA; Omaha, NE; Cheyenne, WI; Salt Lake City, UT; and Carson City, NV (where they stayed at the Glenbrook House); on this journey, Sterne and her party took the Union Pacific Rail Road past such sights as Echo Canyon, Castle Rock, Pulpit Rock, the Devil's Slide and Devil's Gates; she observed "Indians" at the train station shooting arrows for the amusement of passengers, women with "papooses" and Indian girls giggling; the visit to Salt Lake City included a guided visit to the Mormon Tabernacle with much information regarding the organ; a drive past "Mr. Young's house"; some visits to a Crown Point mine and the mint in Carson City; Sterne concludes this section with the observation, "This is a nice place, and we don't mind staying here a while."

The third trip is very interesting, it begins in San Francisco on August 6, 1873, after departing the city by rail, observing Alcatraz, Angel, and Marco's Islands, they pass by San Pablo Bay, the Straits of Carquinez, and then Suisun, stopping at Benicia, CA; Stockton; and Sacramento; followed by a somewhat harrowing stage coach ride from Redding, CA to Shasta.

"Then came packing of the human freight, nine inside five outside, stage a Concord coach, very hard, dusty, close, dreadful"; when they arrived they were first informed that at least one of their party's bed "would have to be made with a pitchfork," although Sterne ultimately found hers on a parlor sofa; from there the party departed for Mount Shasta on horseback with three Native Americans to help with the horses and camping baggage, they rode to a camp and ate grouse cooked on a campfire and slept directly on the ground.

The following day at 6:00 am Sterne and party began the ascent of the mountain, a peak first climbed by a woman in 1856; she describes the mouth of the crater, and the "perfectly blue" water within; after lunch and drinking snowmelt, Sterne goes with "the gentleman" to see the Whitney Glacier.

"Then after a while Mr. S. came to see if we [the women] would go too. I went with him, alone, the others preferring not to go. I felt very fully repaid for a climb to the tip top & a walk of 1/2 mile over a ridge of snow. [I] saw the Whitney Glacier. It is very beautiful, castles & spires & diamonds of snow on the side & the main body all cracked & broken with both wide and narrow channels."

Sterne also describes the amazing view of the lakes and mountains of the Shasta Valley; the last entry in the diary is dated Monday 18 [August, 1873], "reached here tired & dirty & hungry."

Some staining to contents, in card-weight paper wrappers with a hole punched in the top corner and a loop of string tied through it, 5 1/2 x 3 1/2 in.

As is so often the case, we know more about Sterne's husband, Edwin Harrison, than we do of Sterne herself. Although this journal was written before she was married (13 November 1873), we may surmise she was in the company of her future husband, mainly because of the heavy interest in mining and metals, his career. Others she calls "cousins" but that could mean anything. What comes down to us is an interesting journal of an intrepid young woman whose life is under-recorded. Biographies of her husband mention that she was at one time the president of the Missouri State Federation of Women's Clubs and that she had three children.