October 10 marks the 50th anniversary of the publication of Joseph Heller’s satirical anti-war novel Catch-22. There’s been much news coverage, and various related events are planned, including an October 19 reading and discussion at Symphony Space in New York. On Tuesday, November 8, Swann Galleries will be offering several Heller items as part of our Art, Press & Illustrated Books / 19th & 20th Century Literature sale, all of which are signed or inscribed, including a first American edition of Catch-22. 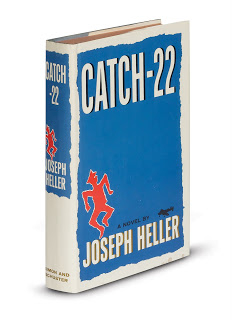 Few works have had the immediate and enduring impact of Catch-22. Not without controversy, Heller’s black-humored evisceration of “Good War” cultural assumptions would become increasingly relevant in the years following its publication, especially in the wake of the escalating Vietnam War. A film version—directed by noted filmmaker Mike Nichols and scripted by Buck Henry, the pair behind the 1967 film The Graduate—was released in 1970 and also proved a success. Included in the auction is the Final Revised Draft of the screenplay inscribed by Heller, in which he enthusiastically praises the just-seen film.
All of the Heller material being offered is from noted New York collector Frank Adamucci, Jr., whom Heller himself described as “far and away my favorite autograph collector.”
Other Catch-22 highlights include a signed British first edition; a signed, uncorrected proof of Heller’s dramatization of his most famous novel; and a wonderful association copy and advance proof that once belonged to W.H. Auden.
Share
October 10, 2011
Author: Swann Communications
Category: 19th & 20th Century Literature
Tags:
Previous