This post comes from John D. Larson, Swann’s 19th & 20th Century Literature cataloguer.
Yesterday we learned of the passing of writer Ray Bradbury in Los Angeles at the age of 91. His contributions to what we understand as the genre of Science-Fiction cannot be overestimated. For many of us, he was what Sci-Fi lit was. 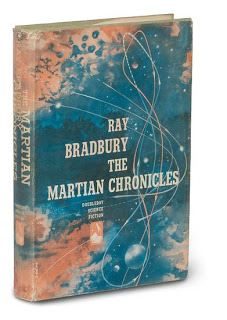 I first encountered his work while sitting on the carpeted floor of my third grade classroom at Roslyn Road Grammar in Barrington, Illinois. Mr. Nicholas, our side-burned teacher, announced that he would be reading a book to us whose title was unknown to me. Dandelion Wine. Immediately I was enthralled and eagerly anticipated the next afternoon’s installment he promised was to come. This was just the beginning. Enthused, engaged, and positively obsessed with the worlds that Bradbury created, I read stories that arced from suburban Chicago to an ersatz African veldt to a perpetually wet Venus to a deftly arranged zero gravity conversation among drifting and doomed astronauts. I began to see a world that was by turns generous, unnerving and amazing. All this I recollect from what I read decades ago. 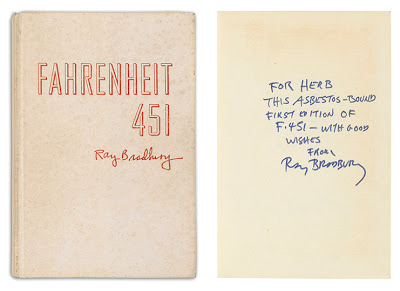 In a delightful parallel, Mr. Bradbury began publishing in the mid 1940s at virtually the same time as Swann Galleries began business, and over the ensuing years we’ve had the pleasure to have successfully brought to auction numerous examples of his works. In the past year we’ve sold signed first editions of The Martian Chroniclesand The October Country; an inscribed first limited edition copy of Fahrenheit 451 in the famous (fireproof!) asbestos binding was featured in a recent 19th & 20th Century Literature Sale.
I avidly read and reread at least a half dozen or so of Bradbury’s books as a boy. To this day, the titles, and the evocative covers (in particular the iconic 50s cigar shaped Sputnik- era rocket depicted mid-launch on the cover of R Is For Rocketand the elaborately tattooed back of the inscrutable narrator of The Illustrated Man, each encountered in original paperback editions), summon fond memories specific to the wonderful tales within.
Dread and hope regarding the future, and a peculiarly appropriate claim to nostalgia, is, for me, Bradbury’s legacy. Fireflies at night, a rocket to Mars, that moment in the wind when the branches say your name, the temperature at which paper ignites…
Share
June 7, 2012
Author: Swann Communications
Category: 19th & 20th Century Literature
Tags:
Previous 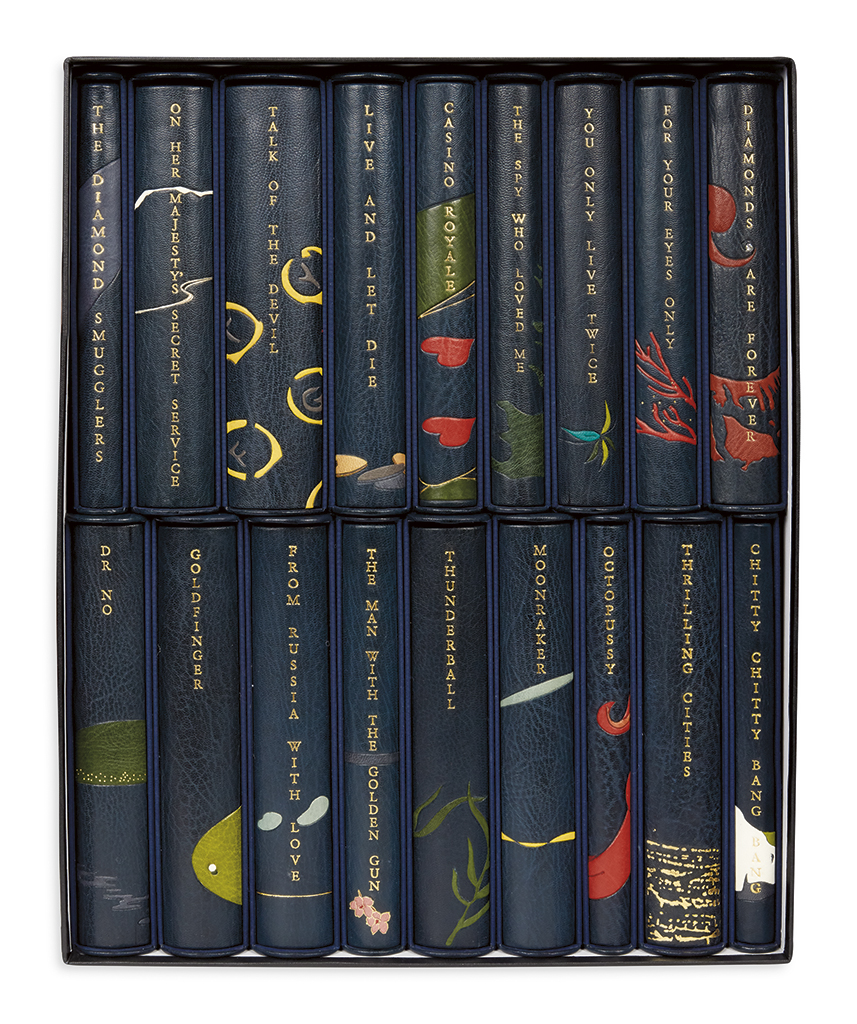