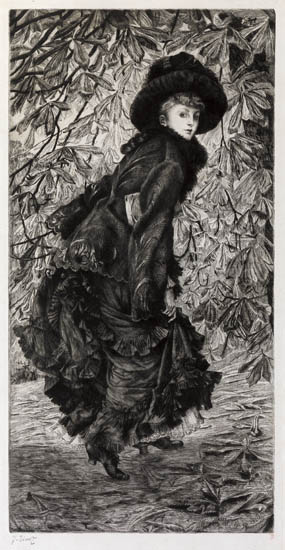 Fall seems the appropriate time to examine James Jacques Tissot’s luminous 1878 etching and drypoint titled Octobre.
Tissot (1836-1902) was a successful French society artist who built his career on portraying fashionable women and the Victorian and Belle Époque aesthetics of his time. The child of Catholic textile merchants, he moved to Paris from his native Nantes to study art in 1856 and trained with protégés of Ingres: Louis Lamothe and Hippolyte Flandrin. He also met Edouard Manet, Edgar Degas and James A.M. Whistler, with whom he maintained ties throughout his life. Tissot was exiled to London in 1871 after his involvement with the Paris Commune in the Franco-Prussian War. In London, his portraits of woman and 19th-century life quickly gained popularity and he became one of the most successful, renowned artists of his day. Tissot took inspiration from many of Whistler’s etchings and paintings, and often borrowed from the same bank of subjects (like views of the Thames). Tissot made his first etchings while studying in Paris in the 1860s and revisited the medium again in 1875-1885. As a printmaker, Tissot primarily reproduced his own paintings (rather than sell the reproductive rights to his work to publishers and printers). The market for reproductive prints in England was exceedingly strong during this time and Tissot found the sale of his etchings a highly lucrative segment of his artistic output. Throughout the production of his prints he maintained a consistent approach to etching that employed meticulous detail and rich tonality resulting in a cohesive, focused oeuvre. The etching Octobre is based on the same-title painting from 1877, now in the Montreal Museum of Art, and follows many of the standard influences in Tissot’s work from the 1870s–including Japanese prints and photography. More specifically, the composition with a single full figure is reminiscent of Japanese Ukiyo-e paintings of the Kaigetsudo School of the early 18th century. Tissot frequently used photography to provide details that lent an immediacy to some of his compositions.

The woman depicted is young Irish divorcée Mrs. Kathleen Newton, Tissot’s frequent model and companion. The two met in 1875 and from 1876 until her death from consumption in 1882 they lived together in Tissot’s home in St. John’s Wood. Tissot would describe these years as the happiest of his life. After Newton’s death, Tissot moved back to Paris and began producing artwork focused on religious subjects and spent the last two years of his life in an abbey in Bouillon, France.
Share
September 11, 2013
Author: Swann Communications
Category: 19th & 20th Century Prints & Drawings
Tags:
Previous