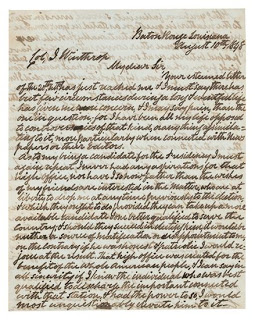 Five lots in tomorrow’s Autographs sale contain letters related to our 12th president, the military leader and Whig, Zachary Taylor. They were written during the period between his victory at the Battle of Buena Vista and his election to the presidency in 1848. The letters contain intimate and detailed discussions that show his apparent ambivalence about pursuing the presidency, as well as his feelings that President Polk’s administration had conspired to deprive him of glory. The letters were collected by Amasa Walker, political economist and Representative from Massachusetts, whose descendants have made the letters available now for the first time.

Nocturne: Our Most Expensive Print