A pair of letters written by President Ronald Reagan to his daughter, Patti Davis, and to anti-nuclear activist Helen Caldicott, come to auction on April 21st. The letters are written on paper bearing the heading “No More Mr. Nice Guy” and a Sandra Boynton cartoon monster. These are retained copies—proper typed versions were sent to the recipients. 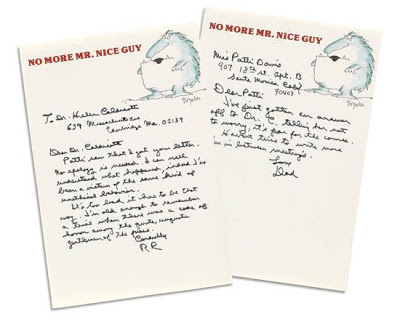 Ronald Reagan, two autograph letters signed, Washington, 18 January 1983. Estimate: $6,000 to $9,000.
With the intention of swaying her father’s opinion regarding nuclear weapons policy, Davis arranged a meeting between the president and Caldicott in December 1982. The president agreed on grounds that the discussion be kept private, but word got out due to a journalist who went back on a promise to keep statements from Caldicott off the record. A media sensation erupted, prompting this exchange.
President Reagan’s letter from January 18, 1983 to his daughter reassures her that, “I’ve just gotten an answer off to Dr. C. telling her not to worry, it’s par for the course…” To Caldicott, he writes, “I’m old enough to remember a time when there was a code of honor among the quote, unquote gentlemen of the press.”
Share
April 14, 2011
Author: Swann Communications
Category: Autographs
Tags:
Previous

Two Items Related to Anne Frank Come to Auction at Swann in May 19th & 20th Century Literature
May 4, 2016