The following post was written by Autographs Specialist Marco Tomaschett.

The often troubled meetings between the press and presidential candidates—much discussed as we approach Election Day, 2016—have a long history in America. Take a look at two lots in our November 1 Autographs auction that illustrate how some of the greatest Americans fit into that history. 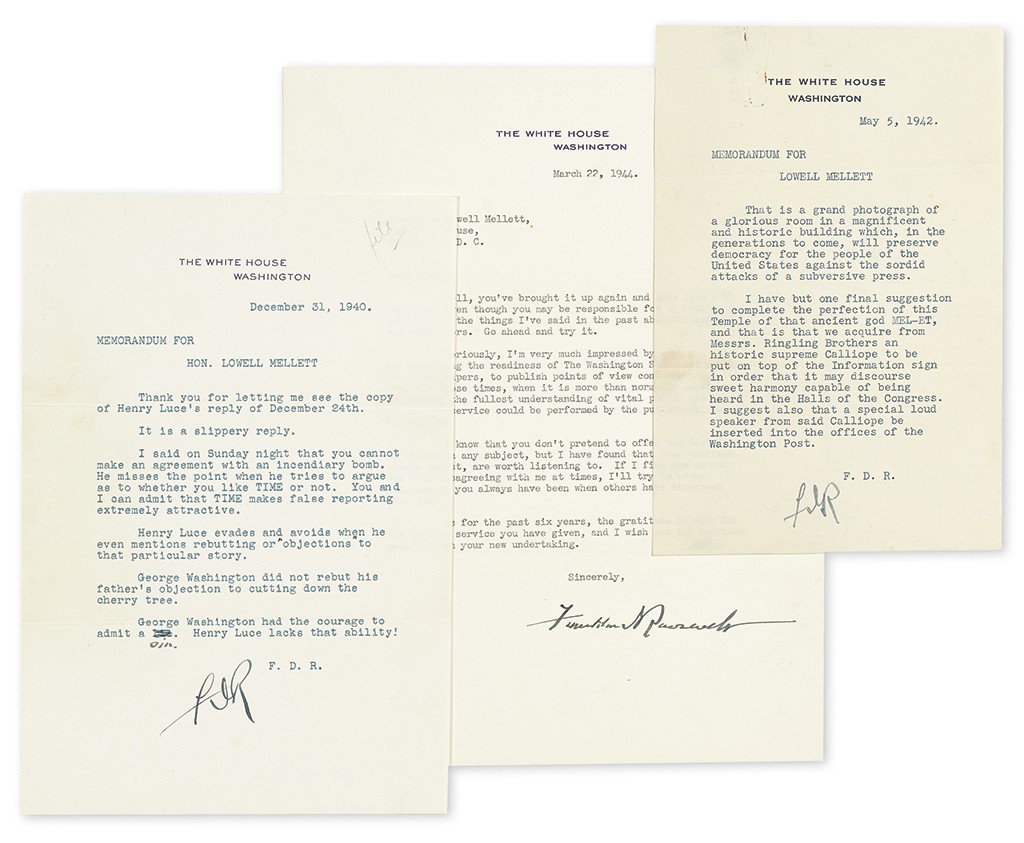 Lot 175, for instance, contains three typed letters signed by Franklin D. Roosevelt to a member of his administration with a background in journalism, Lowell Mellett, who coordinated government film projects to support the war effort. In December of 1940, Mellett had written to Time magazine publisher Henry Luce, criticizing the type of journalism he saw practiced at the magazine. We are lucky that a retained copy of Mellett’s letter was preserved, as was the original of Luce’s reply, and both are included in the lot. As an example of what Mellett takes to be Luce’s inexcusable brand of journalism, he singles out Time’s coverage of the night in 1940 at FDR’s Hyde Park estate when the president awaited the returns heralding his re-election:

“I read your Election Extra. The description of the scene election night at Hyde Park interested me particularly since I recognized that it was a false picture. . . . I was offended by this story, as a newspaper man with a fetish for accuracy, as a supporter of the President who felt that the latter had been put in an unfair light before your readers . . . . . . .[The story g]ives a false impression that the conditions in the Hyde Park house were different from usual. . . . The atmosphere inside was not solemn and was not tense. The opposite was true. . . . The President was not ‘apart from the household;’ he was not ‘alone at the mahogany table in the dining room.’ The President was in the dining room but the people in the ‘household’ were drifting in and out all the time and there were never fewer than five or six people at the table with him. . . .The responsibility of the press is something more than a phrase to be mouthed at annual self-defense and self-glorification meetings of editors and publishers. . . . The press can affect in these days our whole destiny as a people. Some of us, and you are one, are working and fighting to preserve democracy. A democracy fed on fairy tales by an irresponsible press will not be competent to stand up against the forces now loose in the world. . . .” 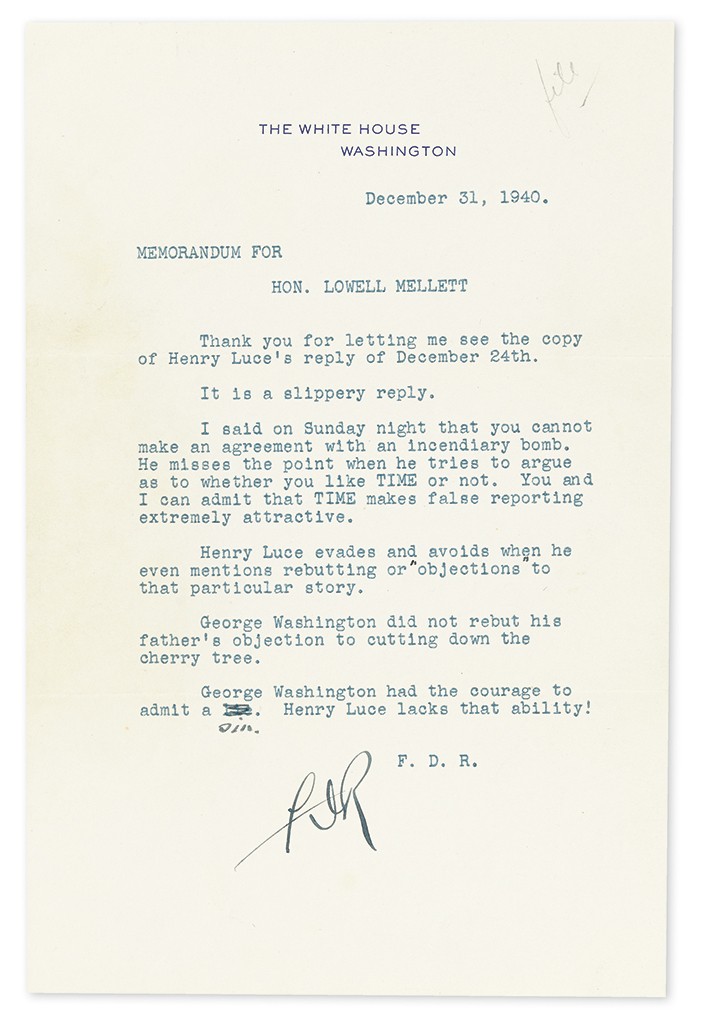 In the reply, Luce writes: “Simply to rebut your objections to the one story seems to be beside the point since what really concerns you is the entire theory and practice of TIME. . . . Many people not only like it but consider it to be the major advance in journalism in our time,” followed by an invitation to discuss the matter in person. It is unknown whether Luce and Mellett ever had such a meeting, but the president, who read both Mellett’s letter and Luce’s reply, suggests that a meeting would be pointless, since he believed there could be no aligning Luce’s journalistic ethos with his own. In his letter to Mellett dated December 31, 1940, FDR writes:

You and I can admit that Time makes false reporting extremely attractive.Henry Luce evades and avoids when he even mentions rebutting [your] “objections” to that particular story.George Washington did not rebut his father’s objection to cutting down the cherry tree.George Washington had the courage to admit a sin. Henry Luce lacks that ability!

FDR and Mellett seem to have held that reportage that contains even relatively minor invented details violates the journalist’s duty to preserve democracy, while some journalists—including perhaps Luce and some of the present day—feel that preserving democracy sometimes compels the journalist to do something different than merely convey the facts.

If journalists sometimes feel obligated to enhance some observed facts in order to achieve a well-meaning end, what must they do if the facts of a newsworthy event are not available to them? Before the Publicity Act of 1910, which required political parties to disclose financial reports for federal elections, parties kept to themselves how much they spent in support of a presidential campaign and from whom they received contributions. Journalists could only speculate about whether presidential campaigns were being influenced by wealthy donors—and many did speculate.

In 1904, long before Time magazine was founded, another President Roosevelt ran a successful re-election campaign. Accusations, however, were published in various newspapers that his success was partly due to an unseemly contribution from railroad executive E.H. Harriman. None with knowledge of the matter contradicted the accusations until the Treasurer of the Republican National Committee, George R. Sheldon, broke with the party’s tradition of keeping such matters secret. 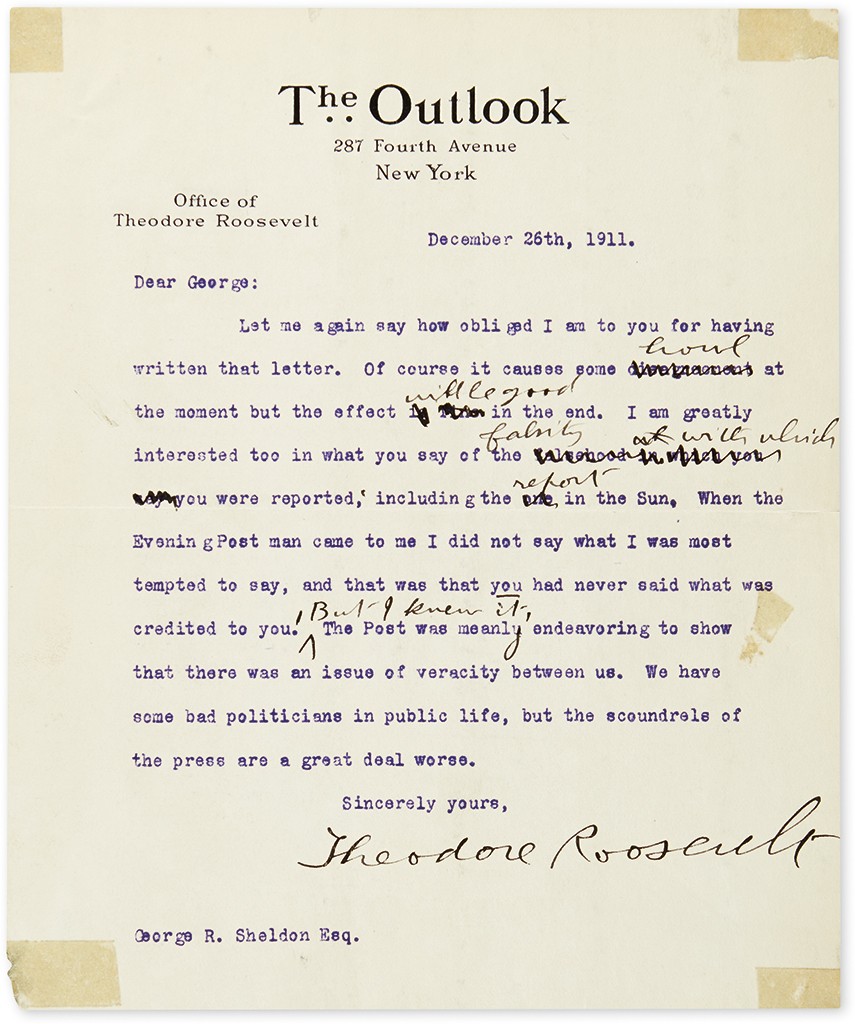 Lot 181 contains correspondence between Theodore Roosevelt and Sheldon, including a letter that Sheldon wrote to the president and had published, disclosing the facts of Roosevelt’s campaign finances. Sheldon writes:

Ever since the Election of 1904, the story has been continuously published and never denied, except by you, that you asked Mr. E.H. Harriman to contribute money to aid in your election . . . . Knowing this to be untrue I several times suggested to . . . [the then] Treasurer of the National Committee that the facts in the case be plainly stated. . . .

Sheldon then gives his account of how Harriman’s contribution to the party was used to defeat the Democrats’ candidate for governor rather than to support the presidential campaign. Harriman’s contribution complied with all applicable laws, and since the money was not used for the presidential election, the party was not obligated by law to report it.

Not only did Roosevelt object to the speculation of the press concerning the Harriman contribution, he was outraged by the reportage of Sheldon’s open letter in the New York Evening Post and the New York Sun. We see this in the typed letter signed by Roosevelt and dated December 26, 1911, written to Sheldon:

. . . When the Evening Post man came to me I did not say what I was most tempted to say, and that was that you had never said what was credited to you. But I knew it, the Post was meanly endeavoring to show that there was an issue of veracity between us. We have some bad politicians in public life, but the scoundrels of the press are a great deal worse.

A look at the frustrated remarks of the two Roosevelts shows us the unsurprising conflict that arises when a democratic press reports on the most important single figure in North America’s oldest democracy.

If some journalists feel professionally obligated to tell a story that is not only true but also responsible and compelling, the obligation is all the greater when the story concerns the U.S. president. The presidency, like national identity, consists partly of mythology. Consider the story of George Washington’s cherry tree, mentioned above by FDR. Mason Locke Weems, in his 1806 edition of The Life of Washington, completely fabricated the incident of the young George chopping down a cherry tree and confessing the deed to his father—not out of malice, certainly, but perhaps because it suited the heroic mythology of the man. The personal character of the U.S. president, whether she or he be Washington or any other president, is expected to be heroic, because she or he serves as an example to inspire and elevate the rest of us, driving us to aspire toward something greater. When the character of our leaders appears to fall short of this standard, it introduces a kind of crisis.

Whether the press helps to assuage such crises, aggravate them, or both, it is instructive to look to American history, some concrete examples of which will available on November 1, 2016, one week before Americans go to the polls to elect their next president. 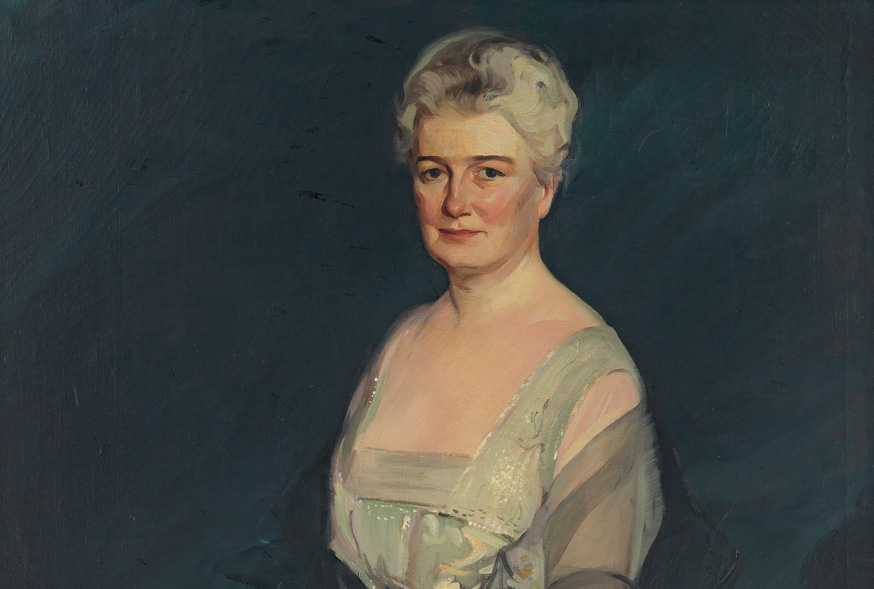