Three books in our upcoming sale of Early Printed, Medical, Scientific & Travel Books tell a dizzying story of power, betrayal and misunderstanding, the reverberations of which can still be felt today.

Florentine philosopher and strategist Niccolò Machiavelli spent two weeks in the February of 1513 imprisoned for his suspected role in a conspiracy against the Medici, the ruling family of Florence for much of the Renaissance. Later in the same year, he wrote a treatise on statehood in a bid to regain favor with Guiliano de’ Medici, who had recently become the Pope. The little book, which he dedicated to Lorenzo II de’ Medici, was called The Prince, and would go on to change the course of Western philosophy. 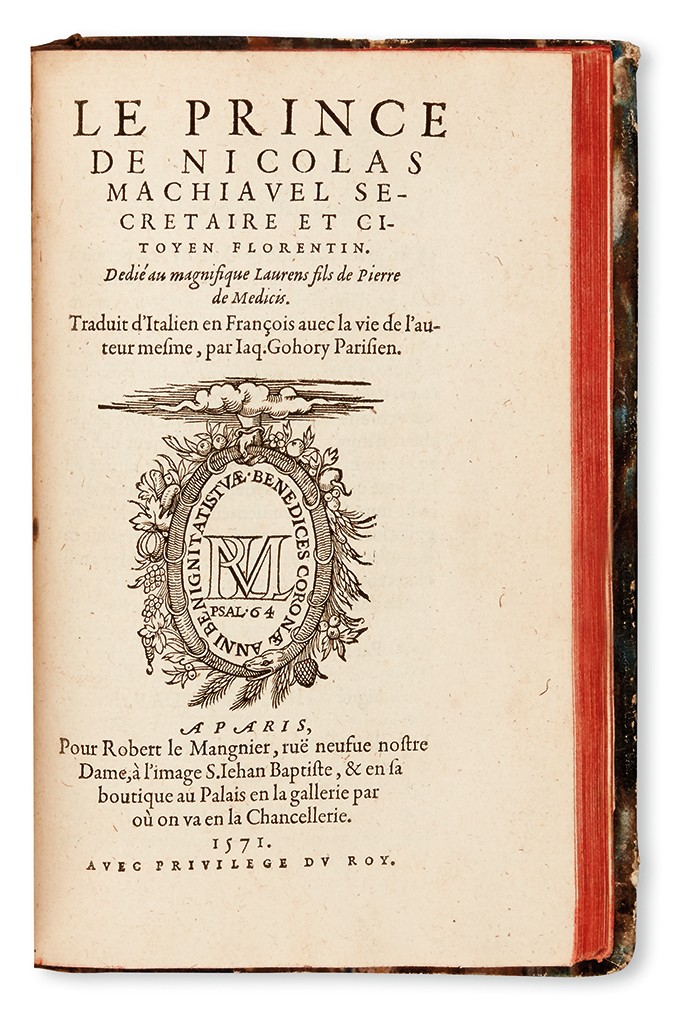 Claudia Roth Pierpont wrote in The New Yorker in 2008: “The Prince, Machiavelli’s how-to guide for sovereigns, turned out to be ‘a scandal that Western political thought and practice has been gazing at in horror and in fascination since its first publication,’ to quote from Albert Russell Ascoli’s introduction to Peter Constantine’s new translation. Circulated in manuscript for years, the book was not published until 1532—nearly five years after Machiavelli’s death—and received its first significant critique within the decade, from an English cardinal who pronounced the author ‘an enemy of the human race.’ Machiavelli stood accused of having inspired Henry VIII to defy papal authority and seize ecclesiastical power for the crown.” 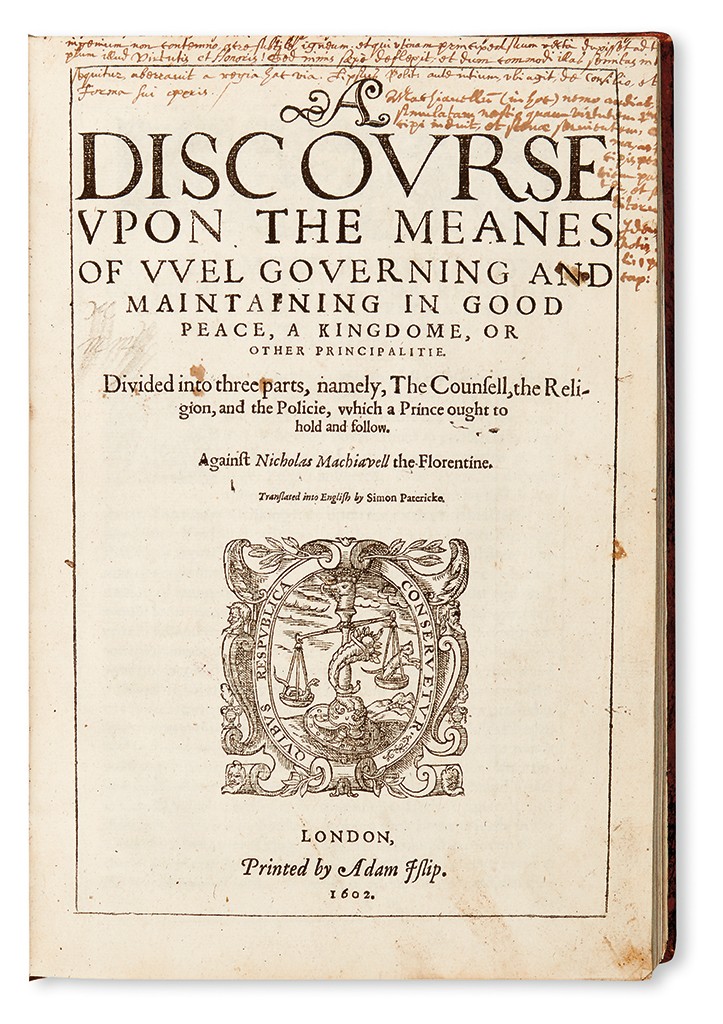 In 1576, Innocent Gentillet published A Discourse upon the Meanes of Wel Governing and Maintaining in Good Peace, a Kingdom, or Other Principalitie . . . Against Nicholas Machiavel the Florentine, in which he accused Machiavelli of advocating for an impious and immoral form of government. Gentillet had been exiled to Geneva after the Massacre of St. Bartholomew against the French Huguenots by Catherine de’ Medici. Two thousand rebel Protestants were killed. Pierpont notes, “There seems to have been little besides her family connection to warrant the Machiavellian association.” Gentillet’s Discourse was popular throughout Europe in the wake of its release, and is responsible for much of the misinterpretation of Machiavelli’s work that survives to this day. Pierpont continues, “[Machiavelli’s] notoriety grew, less through knowledge of the offending book than through the many lurid and often skewed attacks it prompted, with titles on the order of Stratagems of Satan. Wherever a sovereign usurped power from the church or the nobility, whenever ostentatious deceit or murderous force was used, Machiavelli was spied in the shadows, scribbling at his desk amid the olive groves, his quill dipped in a poison so potent that it threatened the power structures of Europe.” 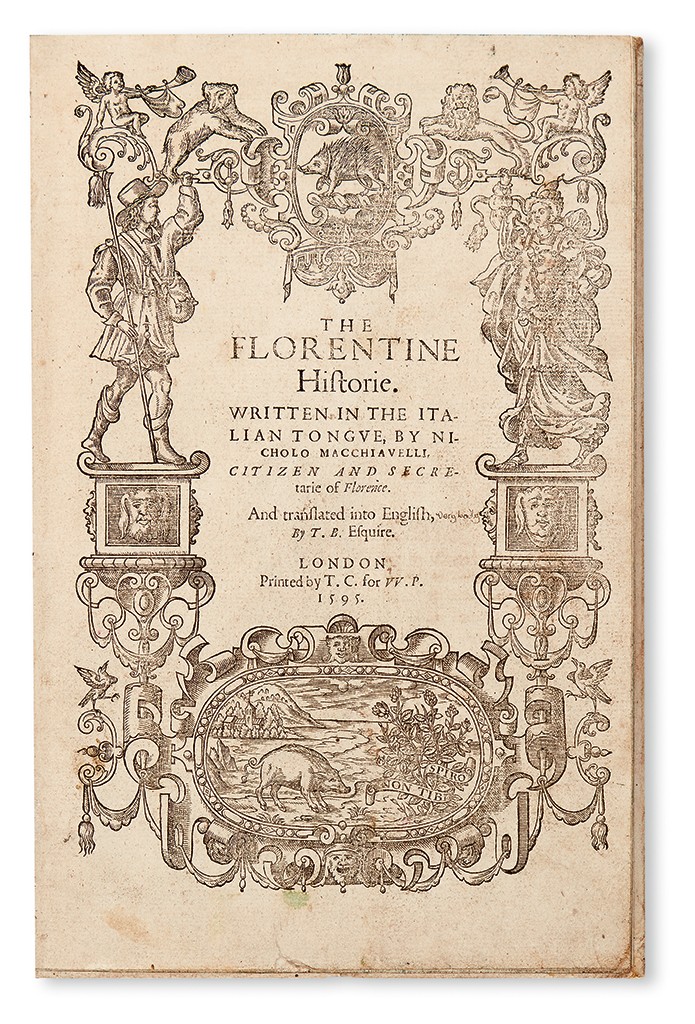 By 1520, Machiavelli had more or less returned to Medici favor and was commissioned by the family to write a history of Florence. The book begins with the fall of the Roman Empire in 1215 and ends with the death of Lorenzo il Magnifico in 1492. Like The Prince before it, The Florentine Historie was distributed as a manuscript for many years and was not printed until 1532. Such was the influence of these books on 16th-century Europe that nearly 500 years later, a single auction can offer this call-and-response of discourse that shook Western culture. 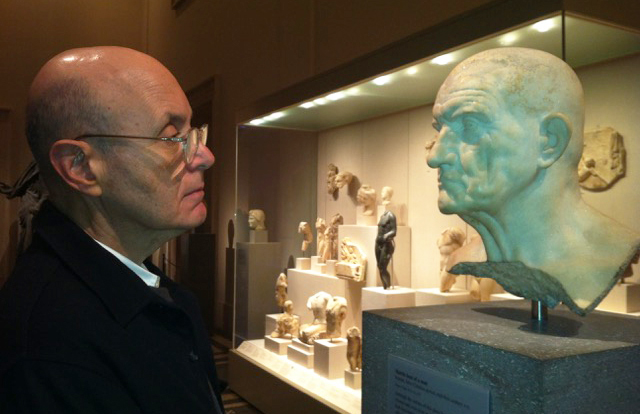 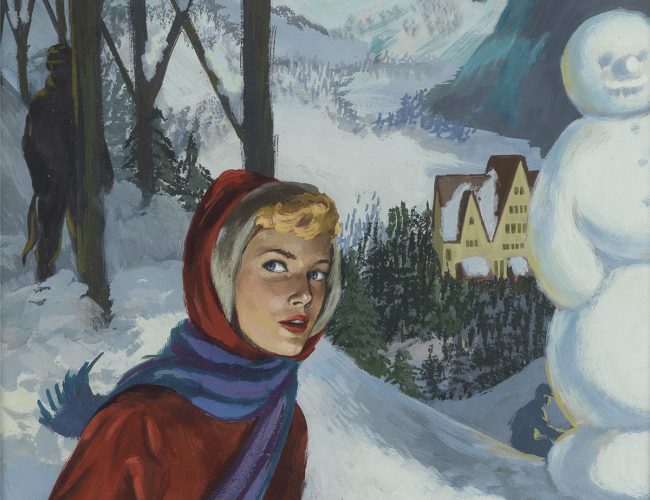