Stanley Simon of New York City was a passionate life-long collector of sci-fi, thriller and fantasy first editions. His paramount collection of almost 100 first editions, nearly all of them signed, forms the spine of our May 15 auction of 19th & 20th Century Literature. 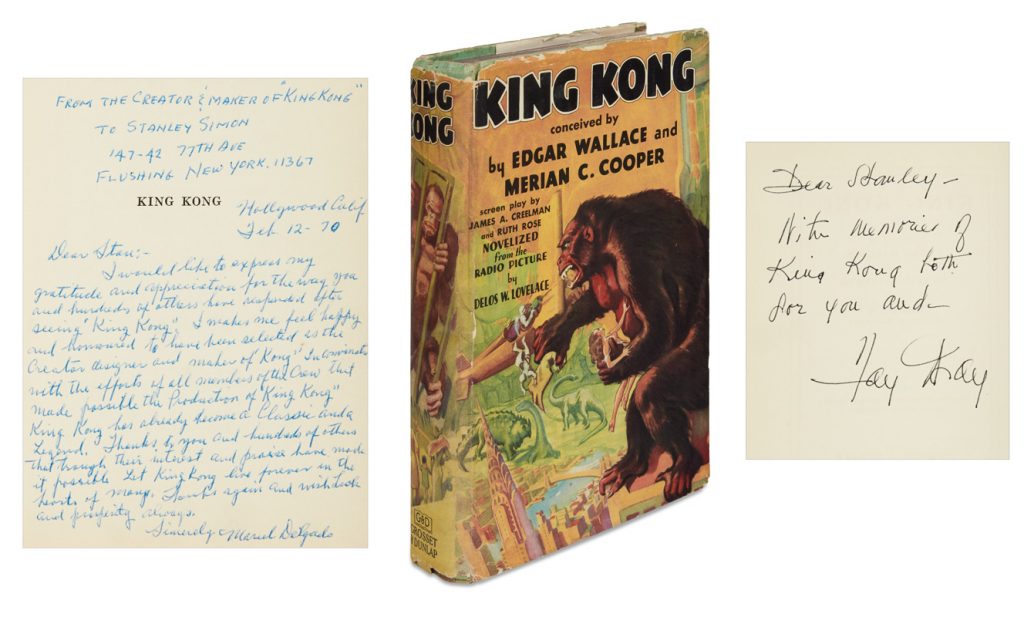 Simon worked at the post office for 30 years but always was intensely focused on his collections. He was especially interested in cross-overs between literature and Hollywood, seeking such treasures as the first edition of Delos W. Lovelace’s novelization of King Kong, 1932, inscribed by creator Marcel Delgado and actress Fay Wray, who wrote, “Dear Stanley – With memories of King Kong both for you and – Fay Wray.” Many highlights in his collection found their way to the silver screen, especially titles by Philip K. Dick, including: a first edition of A Scanner Darkly, 1977, reinterpreted for film by Richard Linklater in 2006; a first edition of Do Androids Dream of Electric Sheep?, 1968, the basis for Ridley Scott’s 1982  Blade Runner; and a signed first edition of Man in the High Castle, 1962, now a series on Amazon. Also of note, though they were never made into movies, are a signed first edition of Dick’s Ubik, 1969, and the galley proof of Valis, 1987, neither of which are known to have appeared at auction before. 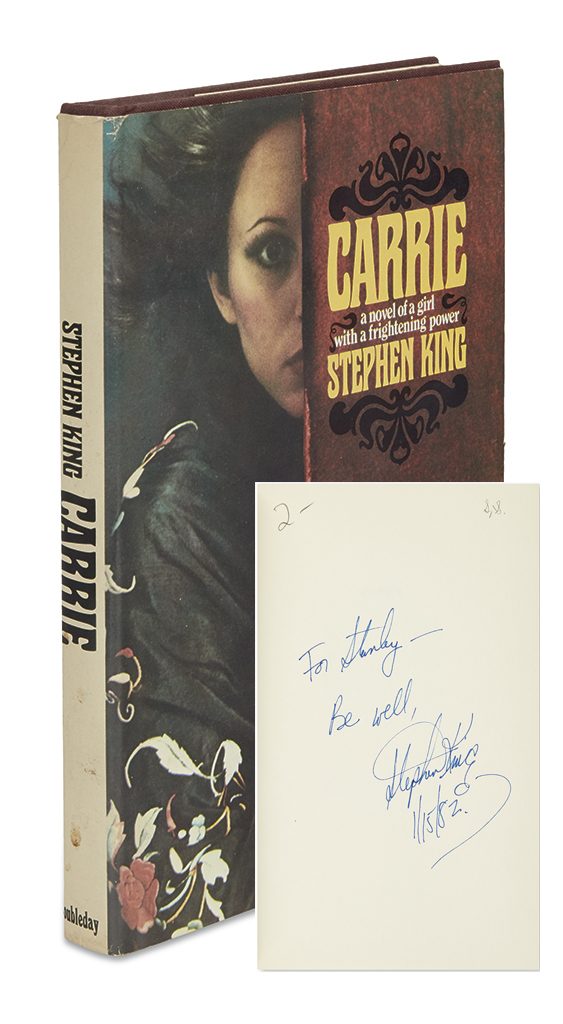 Stephen King is also well-represented in the classic book-cum-movie genre: a first edition of Carrie, 1974, inscribed to Stanley, and the deluxe limited edition of The Dark Tower: The Gunslinger, 1982, signed by King and illustrator Michael Whelan, which is movie from 2017. 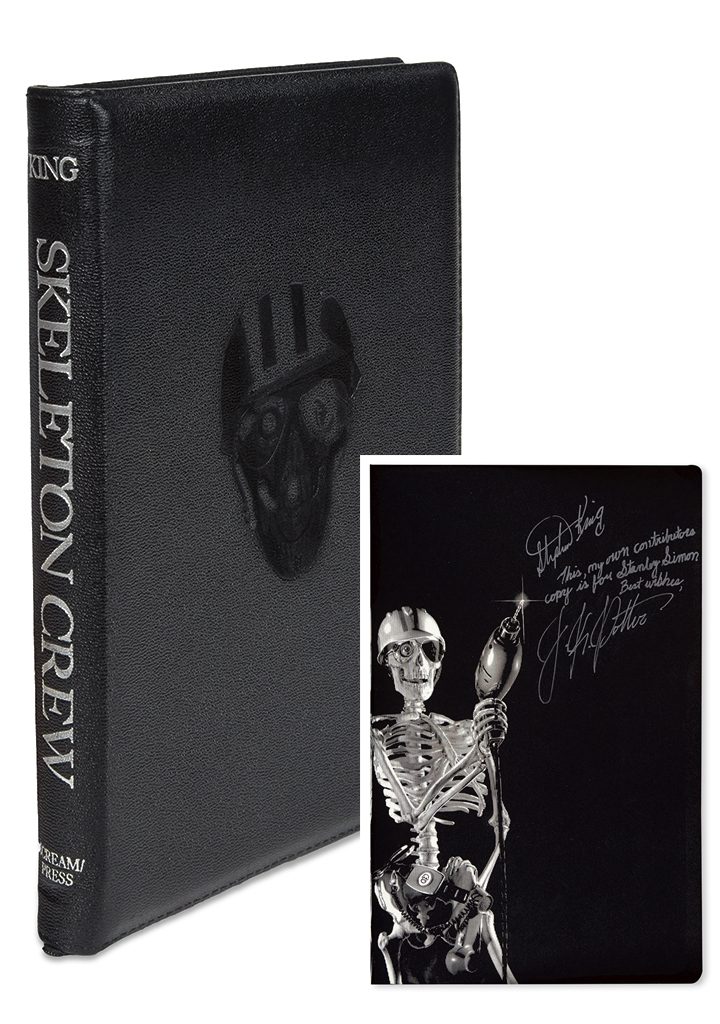 Also available is the deluxe limited edition in zippered black leather of Skeleton Crew, 1985, previously in the collection of the illustrator, J.K. Potter, in which he wrote, “This, my own contributors copy, is for Stanley Simon.” Making their auction debuts are the galley proof of The Shining, 1977, signed and inscribed, and the uncorrected proof of The Stand, 1990, inscribed to Simon. 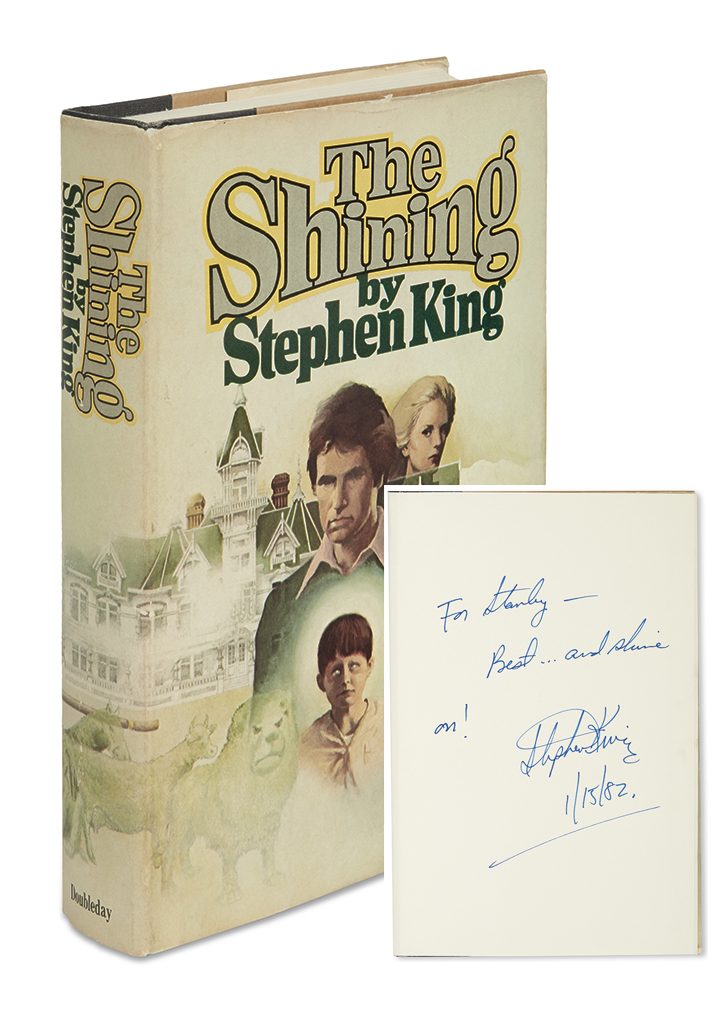 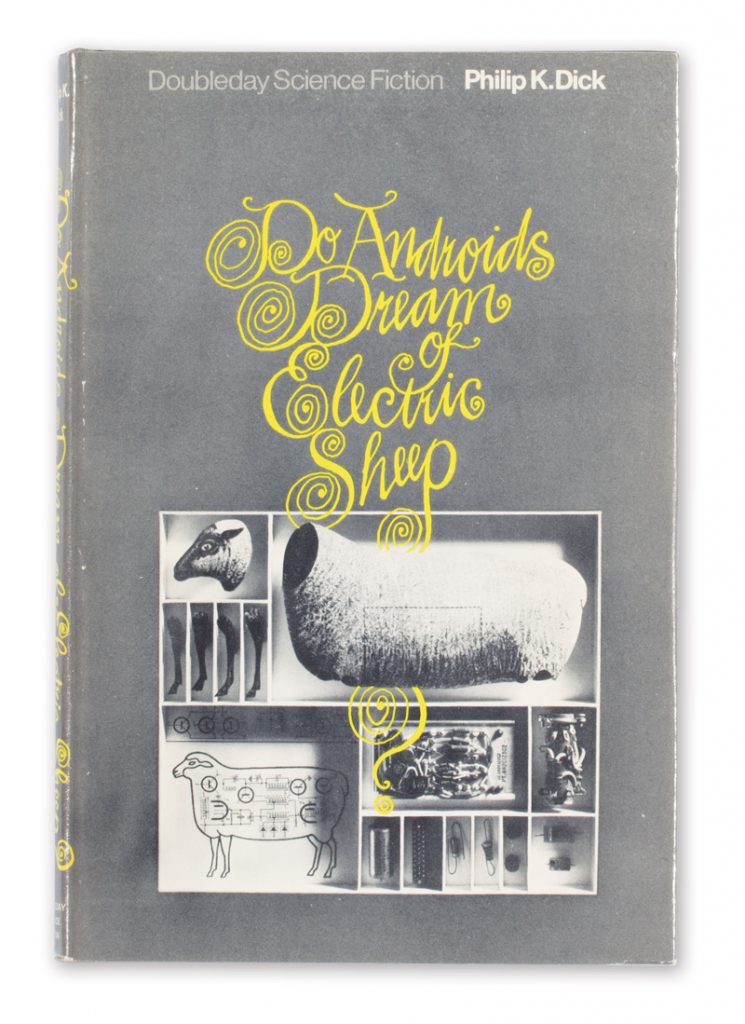 Continuing the trend is a signed first edition of Isaac Asimov‘s second book, I, Robot, 1950–obviously the inspiration for the 2004 movie of the same name starring Will Smith. Also available Asimov’s complete Foundation trilogy, 1951-53, the winner of The Hugo Award for best all-time series, each first editions signed by the author, still in their original dust jackets. 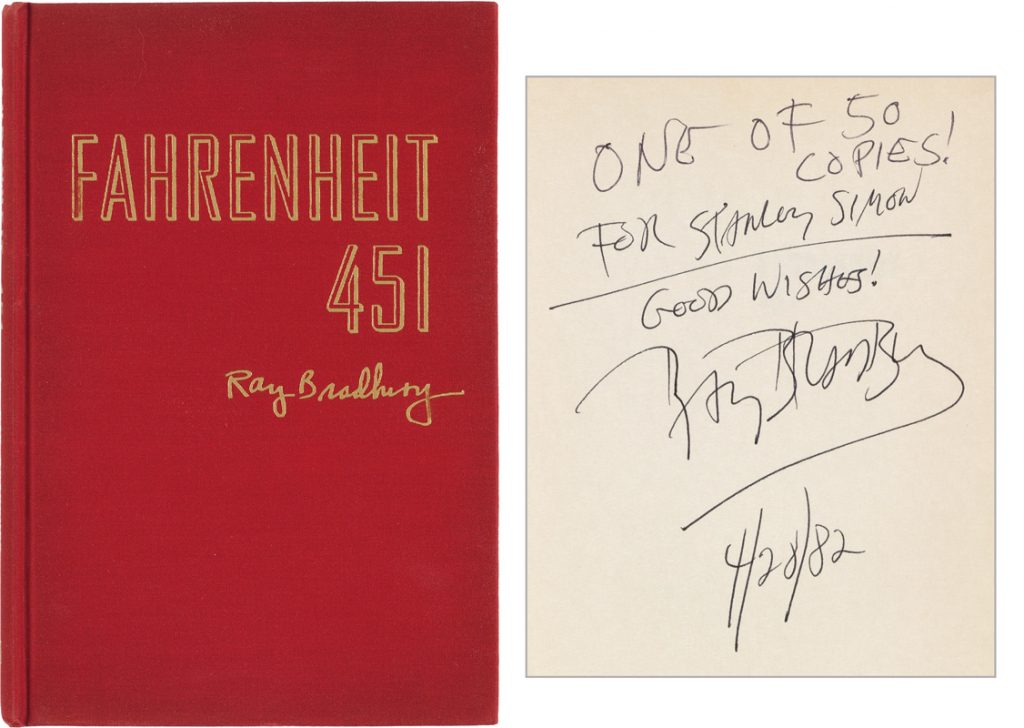 Of course, no library of science fiction would be complete without highlights from the oeuvre of the king of the genre, Ray Bradbury. A limited author’s edition personally inscribed to Simon of his magnum opus Fahrenheit 451, 1953, as well as a sign first limited edition bound in asbestos, lead the selection. The first three volumes of Futuria Fantasia, 1939-40, all signed, and a presentation copy of the first edition of The Martian Chronicles, 1950, signed and inscribed to Simon with a shouting man drawing, are also available. 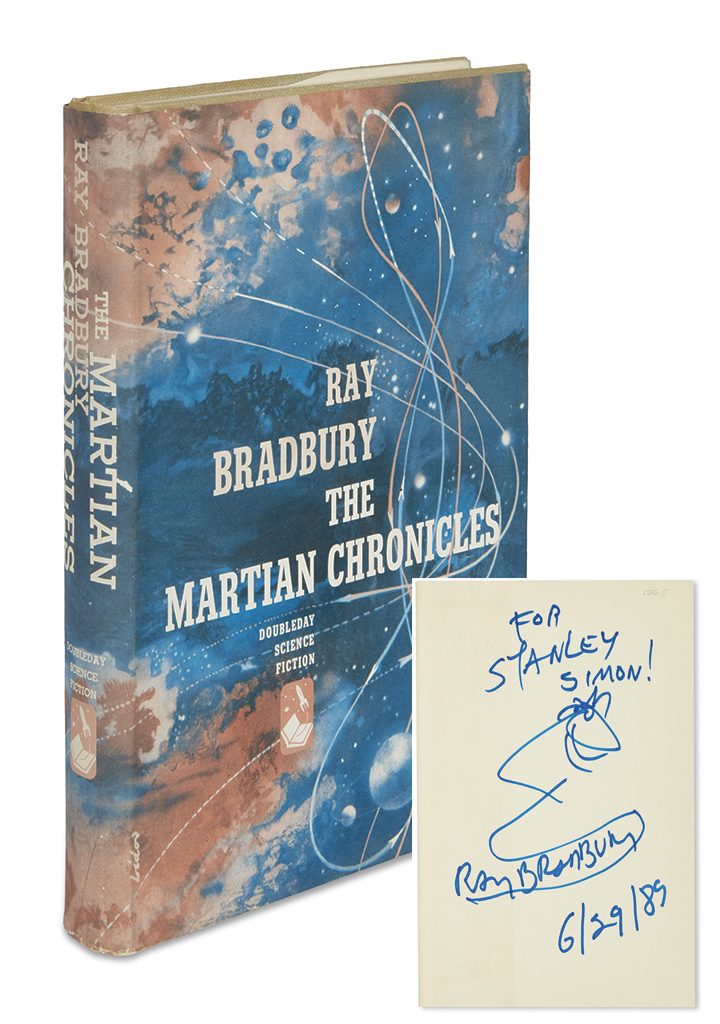 Browse the full catalogue. Lots in this auction from the Estate of Stanley Simon are marked ESS. 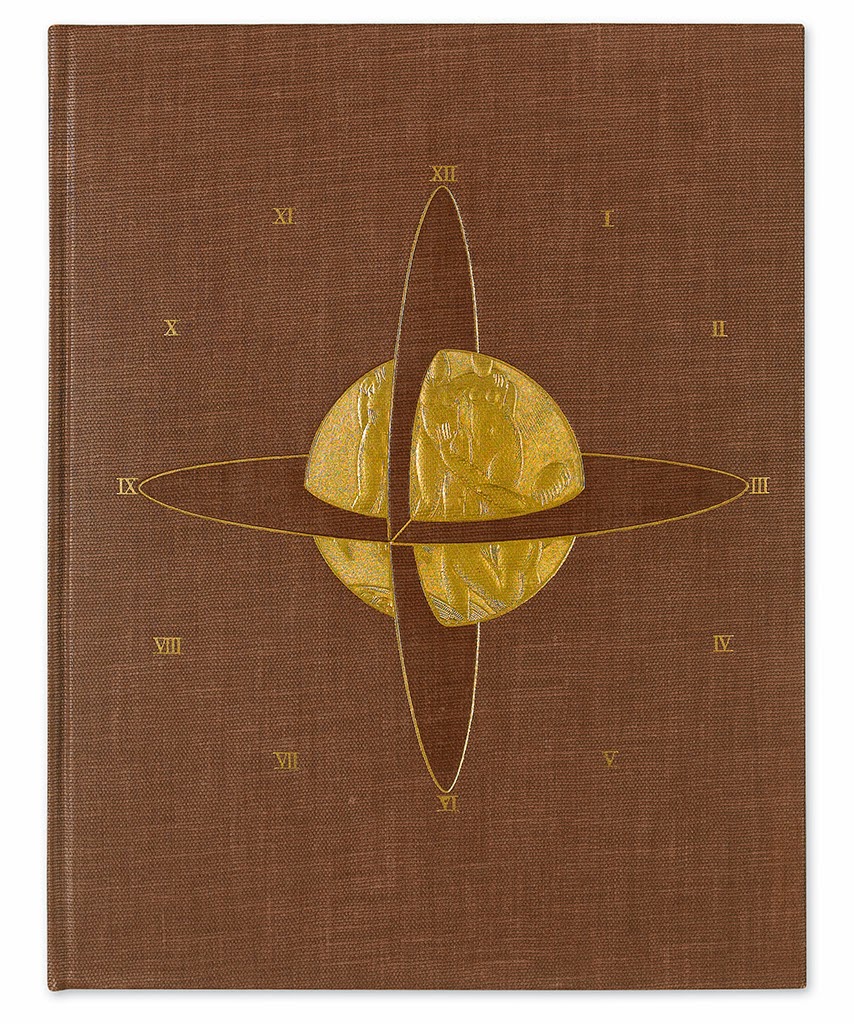 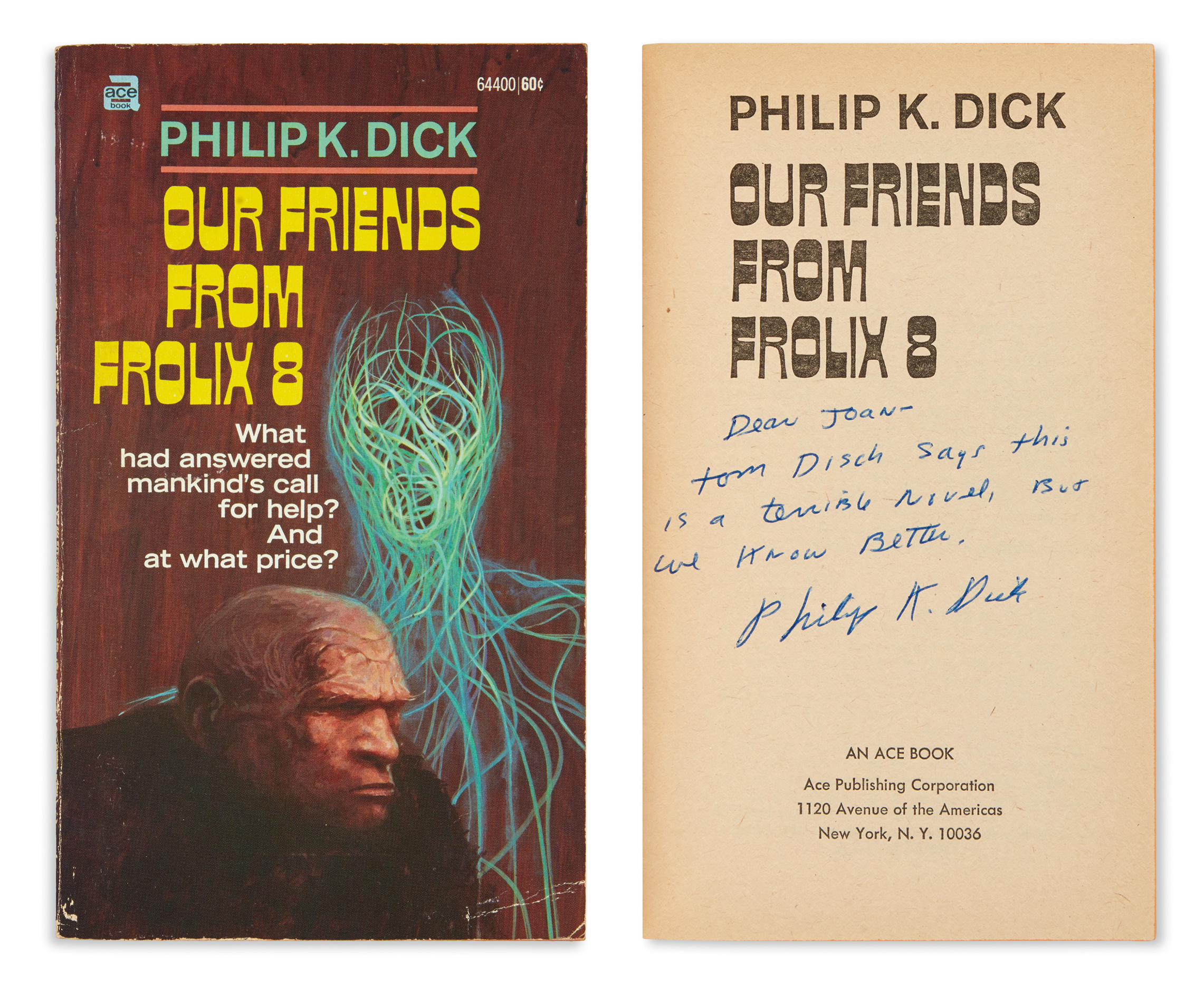