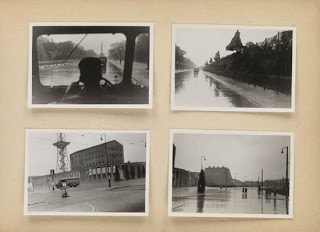 Given the album’s broad range of pictures — Nazi solders en route to Minsk (the site of a concentration camp), political prisoners of war, a Jewish prisoner wearing a Star of David, Hitler arriving at Marienurg, as well as scenes of the photographer and his “frau” (a Marlene Dietrich-lookalike) — the story was immediately picked up by Eines Tages, a site associated with the German magazine Der Spiegel, whose blog received more than 7 million hits in a single day!

An online reader in Germany quickly identified the pictures as the work of Franz Krieger (1914-1993), a former Austrian press photographer and businessman. Readers in South Africa, the U.S. and Europe posted additional information, clarifying the location or backstory to some of the pictures. Clearly the photographs still had extraordinary resonance and historical interest. Perhaps this overwhelming response may be attributed to Krieger’s direct, if not artful, documentary style as well his special access to Hitler. Indeed, the album’s narrative reflects a startling duality, alternating between pictures of the photographer’s personal life and the military activities he was commissioned to document. The pictures offer glimpses into the quotidian nature of the soldiers’ lives, which is counterpointed with compelling portraits depicting the victims of the Nazi’s brutal campaign.


Now, this uncommon album containing 214 photographs from 1941-1942 is coming to auction. For more information, read the complete catalogue description.