When Hungarian-born photographer André Kertész relocated to Paris in 1925, he was exposed to a community of avant-garde painters and photographers intent on infusing modernism’s new visual vocabulary into a range of artworks. 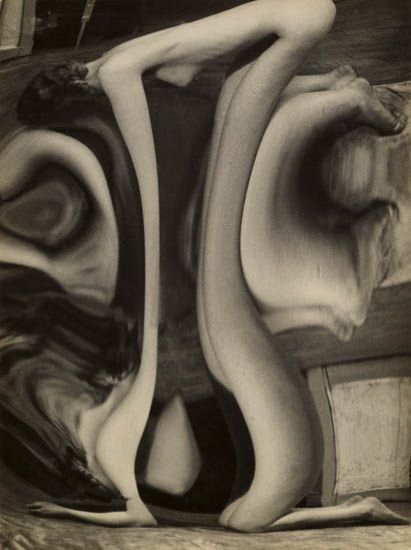 Kertész had already experimented with unusual patterns and optical illusions created by various surfaces, such as water and glass spheres. His series of human distortions were a highly charged, radical interpretation of the female figure, which appears twisted and elongated due to its visual manipulation by a carnival-like mirror.

The series was commissioned by French humor magazine La Sourire, and reflected the unusual formal investigations associated with the surrealist idiom.

Interestingly, Kertész’s original name for this suite of images was The Grotesques, alluding to the uncanny results: bodies depicted in ways beyond immediate recognition, and weirdly distended or bulbous. Lot 33 in Swann’s upcoming auction of Fine Photographs is an elegant study that renders the model in a more familiar fashion, emphasizing the attentuated form of the modern woman.

Blues for Smoke at the Whitney