Yesterday’s Printed & Manuscript Americana auction sold 90% of its offerings. Selling above their pre-sale estimates were lots pertaining to the American Revolution, American Indians, the Civil War, Latin America, whaling, and the most American of pursuits—baseball. The day’s top lot was a correspondence archive from the famed New Light minister, Jonathan Edwards, concerning his mission to the Indians at Stockbridge. The 16 manuscript items, dating from 1752 to 1756, brought $50,400. 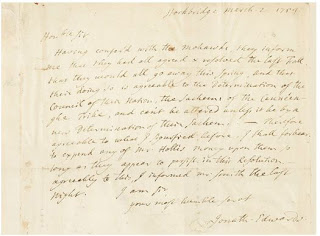 Jonathan Edwards, Correspondence archive concerning his mission to the Indians at Stockbridge, 1752-56. Sold for $50,400. 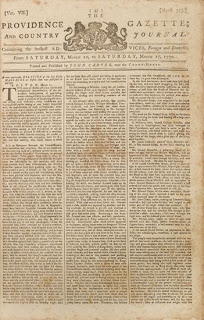 90 issues of the Providence Gazette and Country Journal, with 60 of them dated 1770 or 1771, and 20 of them dated from during the American Revolution, as well as single war-date issues of the New England Chronicle, Newport Mercury, Boston Gazette, and Connecticut Gazette—for a one volume bound folio of 94 newspapers, brought $38,400. The newspapers, the bulk of which are from 1770 to 1776, detail the “bloody massacre at Boston.”


And on baseball’s opening day, a Currier & Ives print, The National Game. Three “Outs and One “Run.” Abraham Winning the Ball, in which Abraham Lincoln is depicted as a victorious baseball player, with defeated candidates Bell, Douglas and Breckinridge looking on, made in 1860, the year baseball stepped forward as the national sport, brought $10,800, a record for an uncolored Currier & Ives print. 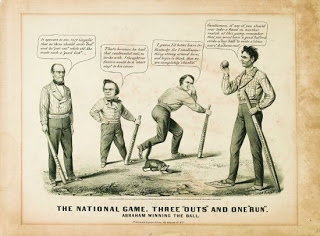 Burlesque Archive: “Strip Teasing is the Most Mysterious and Glamorous of Professions”