This mid-November sale of Rare & Important Travel Posters had an excellent sell-through rate of 77%, bringing multiple auction and artist records for posters of all modes of travel. 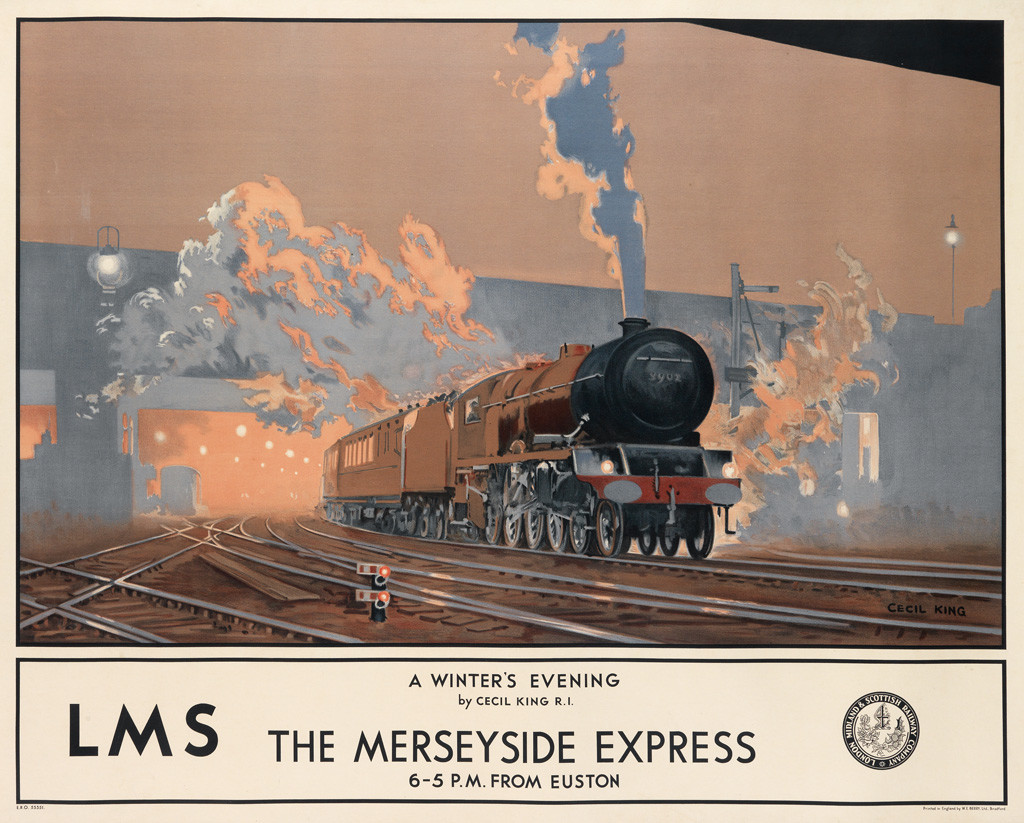 Lot 150: Cecil King, LMS / The Merseyside Express, circa 1937. Sold November 19, 2015 for $5,750.
Cecil King was best known for his paintings of naval and maritime subjects, making this industrial locomotive scene entitled A Winter’s Evening atypical of his work. LMS / The Merseyside Express, which features the aforementioned painting, set a record of $5,750 for any poster by the artist to come to auction. 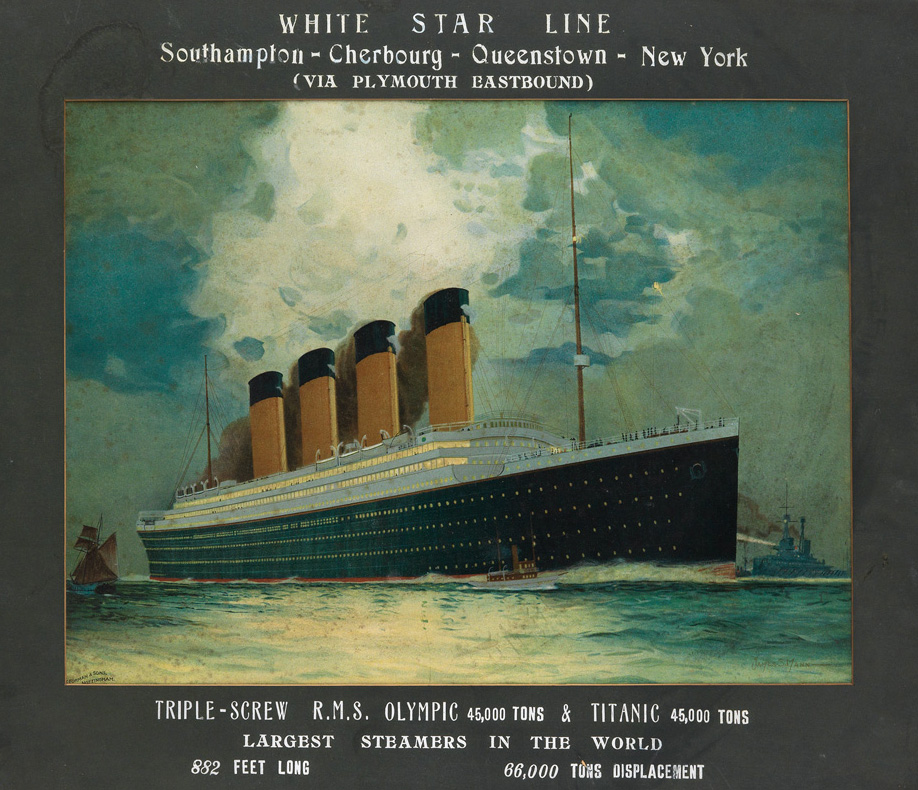 Lot 81: James Scrimgeour Mann, White Star Line / R.M.S. Olympic & Titanic, circa 1911.
Sold November 19, 2015 for $10,625.
The above poster promotion for famous sister ships the Olympic and the Titanic, has only appeared once before at auction in its English mat, and this is that same copy. The poster appeared twice before in Europe, with a different exterior mat promoting White Star Line’s Swedish ticket agent. The poster realized an auction record with $10,625. 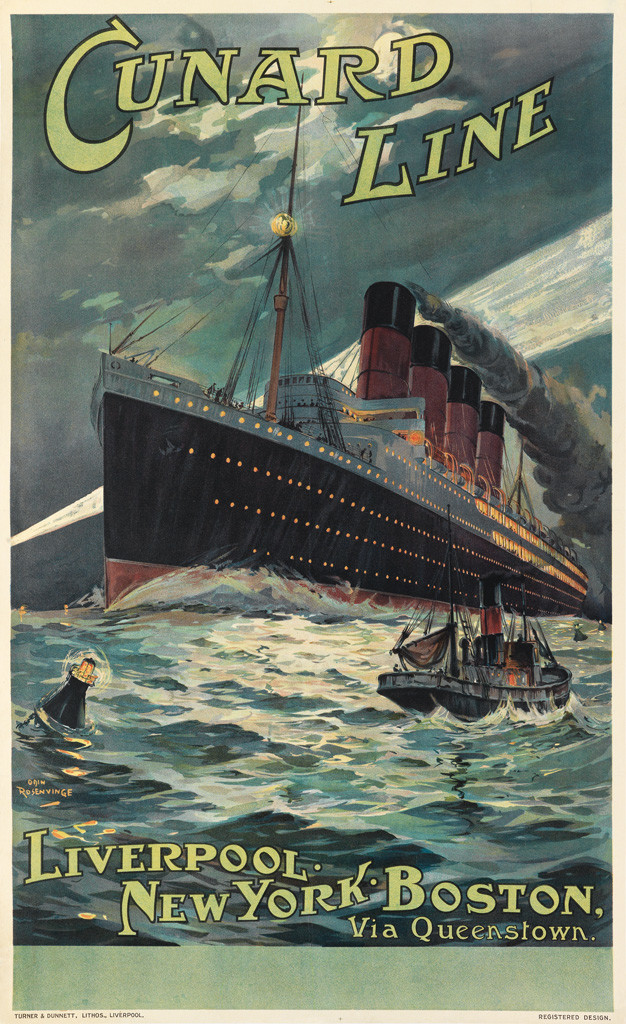 Lot 78: Odin Rosenvinge, Cunard Line / Liverpool • New York • Boston / [Lusitania], circa 1907. Sold November 19, 2015 for $15,600.
Another example of early 20th century transatlantic travel advertisment, Odin Rosenvinge’s poster of the legendary Lusitania predates the ship’s maiden voyage. Although the ship’s name is absent from its hull, the Lusitania can be recognized by her signature four smokestacks and white stripe along the bow. This nocturnal seascape went for an artist record of $15,600, well over its estimate. 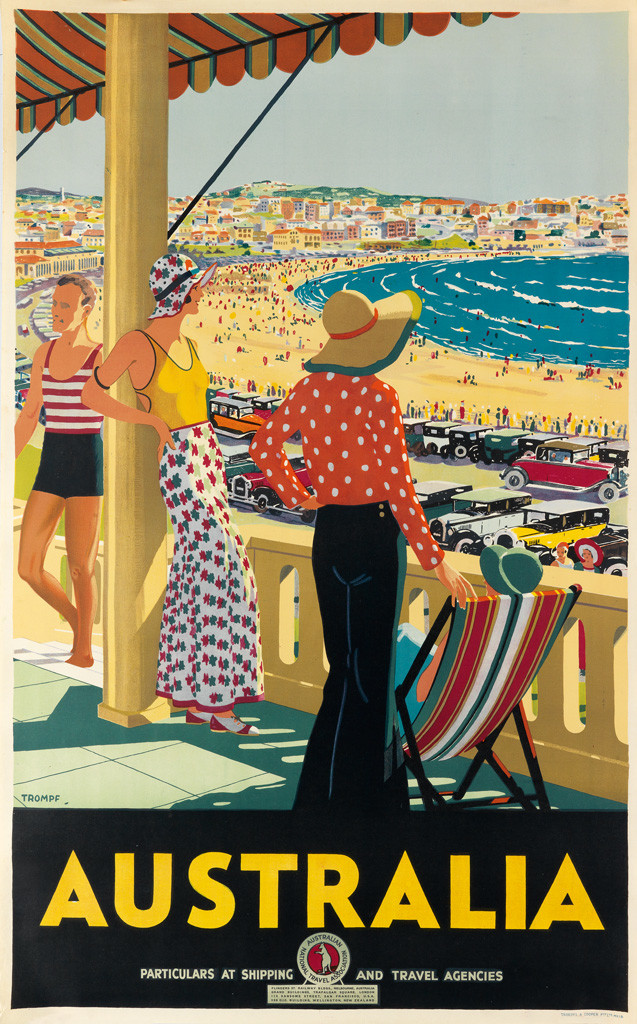 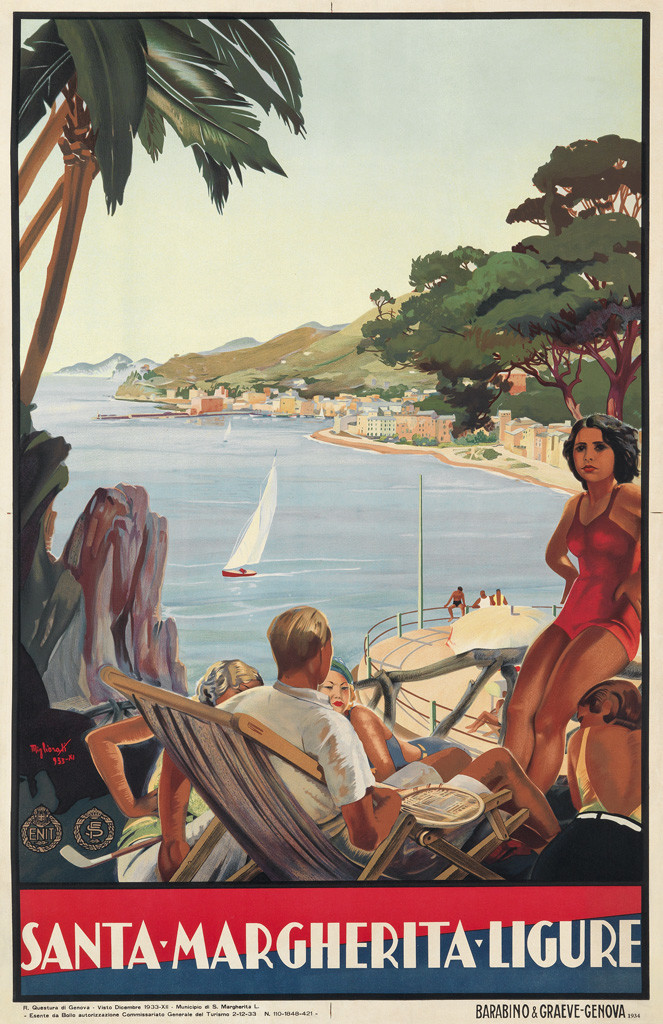 Left, Lot 20: Percival Albert (Percy) Trompf, Australia, 1929. Sold November 19, 2015 for $15,000.
Right, Lot 56: Viero Migliorati, Santa • Margherita • Ligure, 1934. Sold November 19, 2015 for $8,450.
Percival Trompf’s iconic image of Bondi Beach was one of the first travel posters commissioned by the Australian National Travel Association (ANTA) to promote the nation as a travel destination. The colorful poster brought a record for the artist at $15,000. Viero Migliorati’s poster for Santa Margherita Ligure, a popular resort located in the heart of the Italian Riviera between the towns of Portofino and Genoa, made an auction record at $8,450. 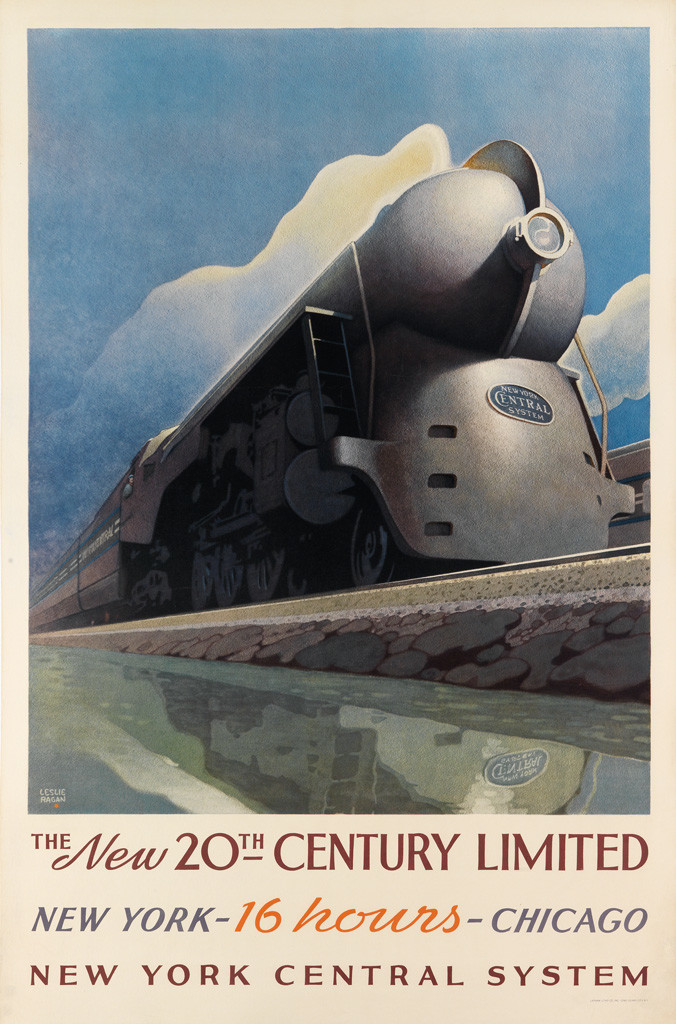 Swann President and Director of the Vintage Posters department Nicholas D. Lowry said, “Every auction has its surprises, and in this auction the Internet drove bidding especially high in the Italian posters being offered. Swann has been a market leader in broadening collector awareness about travel posters, and we continue to prove ourselves to be America’s best venue for offering select posters in this category.” 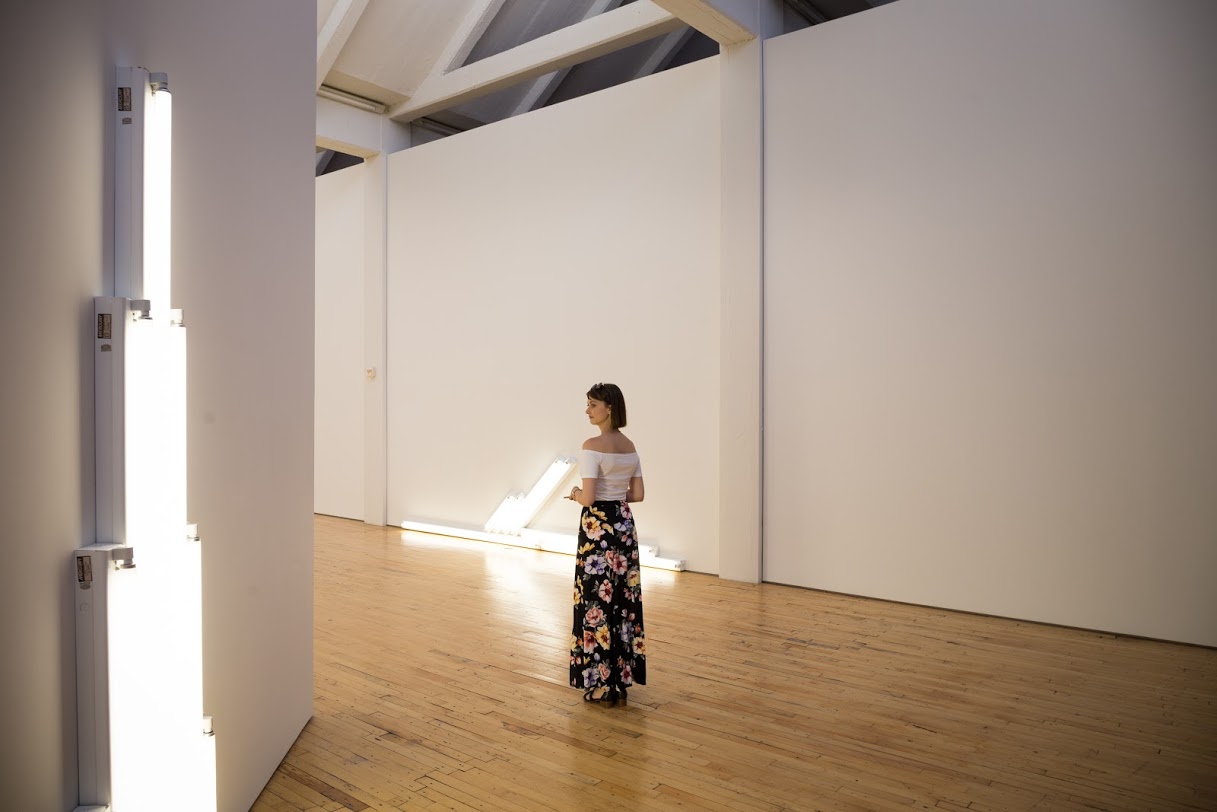 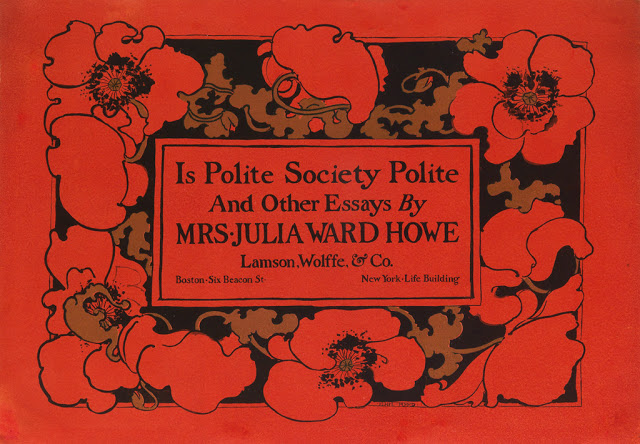