The sale will open with fine early examples from the years prior to the First World War, with images from France, Germany and Switzerland. These posters emphasize the communal appeal of ski resorts, rather than the thrill of skiing. 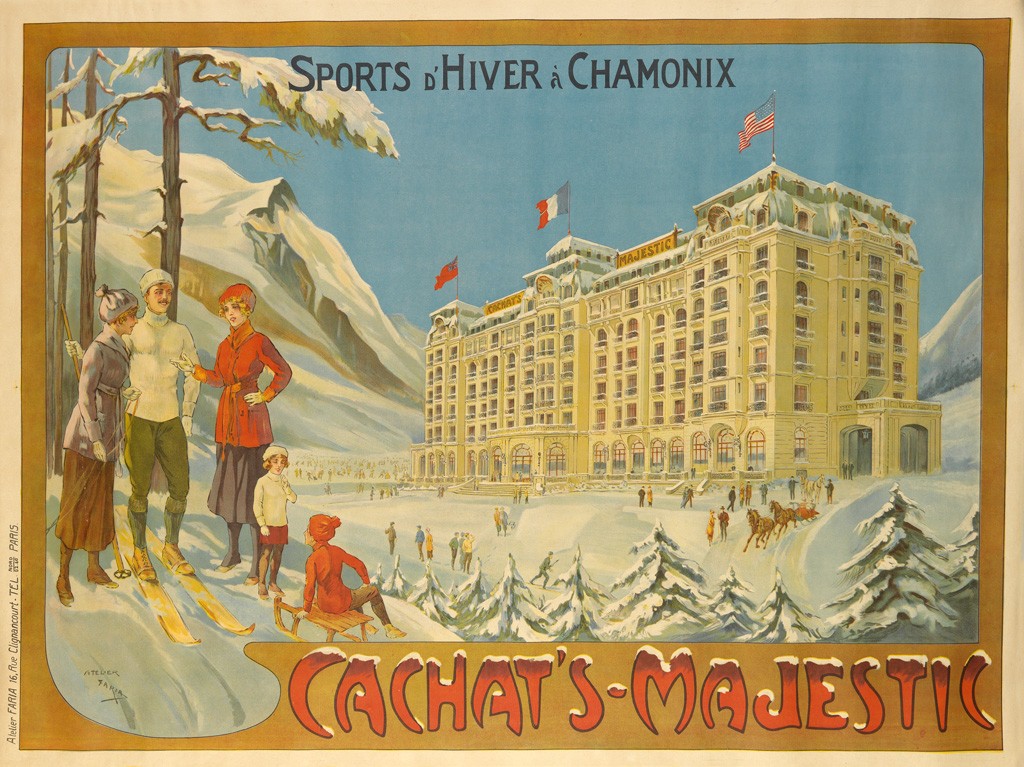 Post World War I, the shift in focus from pampered vacation to wild adventure is visible in the advertising. There is strong representation of the bigger and more famous Swiss resorts, such as St. Moritz, for which we have five separate images. One of the most dramatic is by Carl Moos, seen below in its two formats. 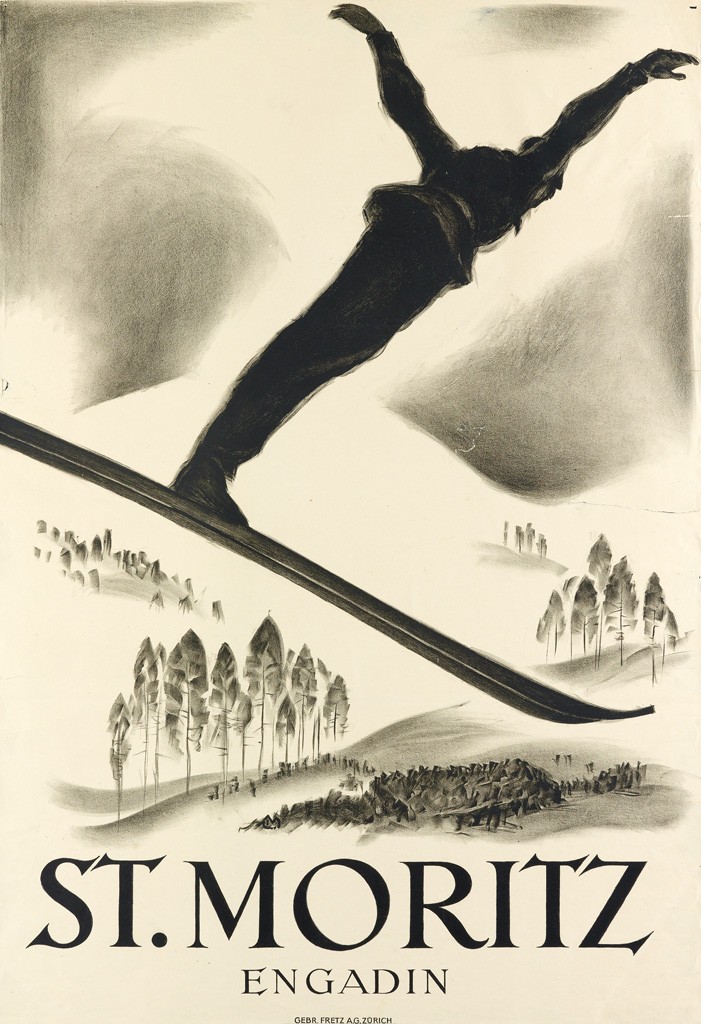 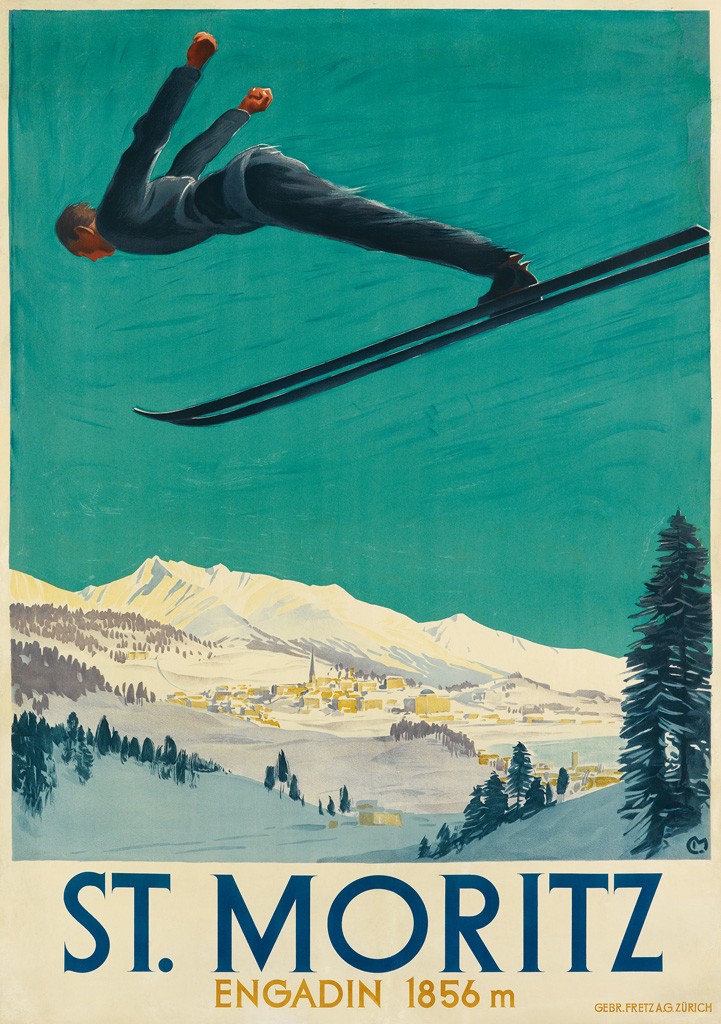 Europe wasn’t the only place to hit the slopes. There are also some exceptionally rare American examples, including three for which we could find no previous auction record: Augustine Haugland’s National Championships and Olympic Games Finals / Paradise Valley, 1935; U.S. Team Ski Tryouts / Mt. Hood, Oregon, 1939, by George Andrew Corley; and a circa 1940 poster by an unknown designer advertising Sun Valley Lodge / Union Pacific Railroad. 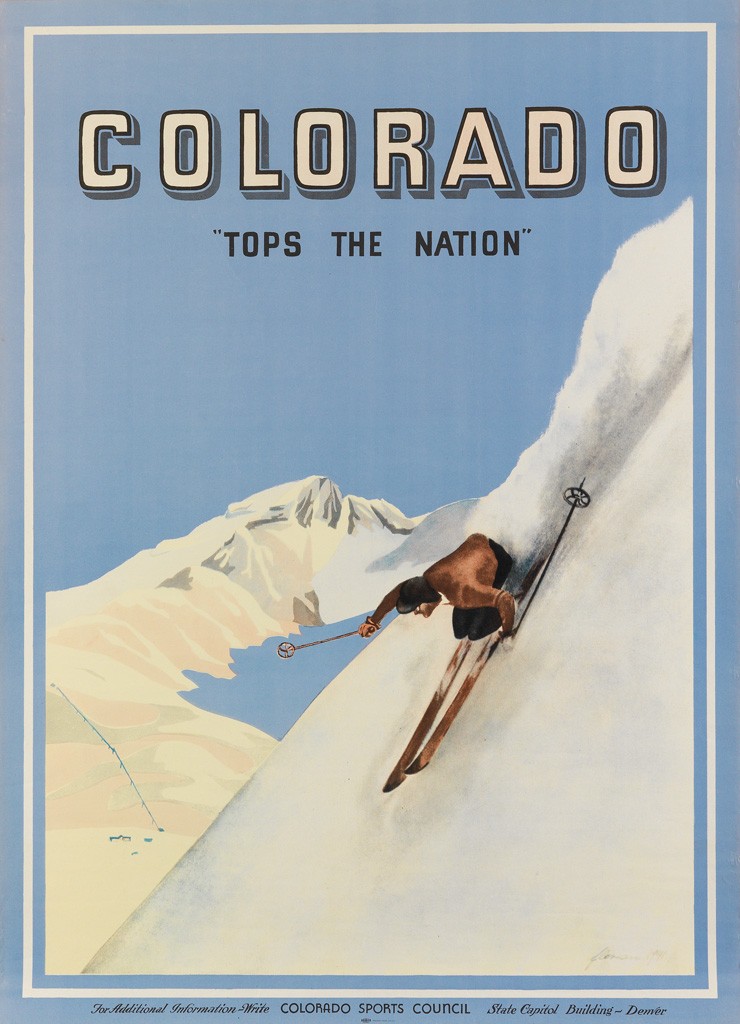 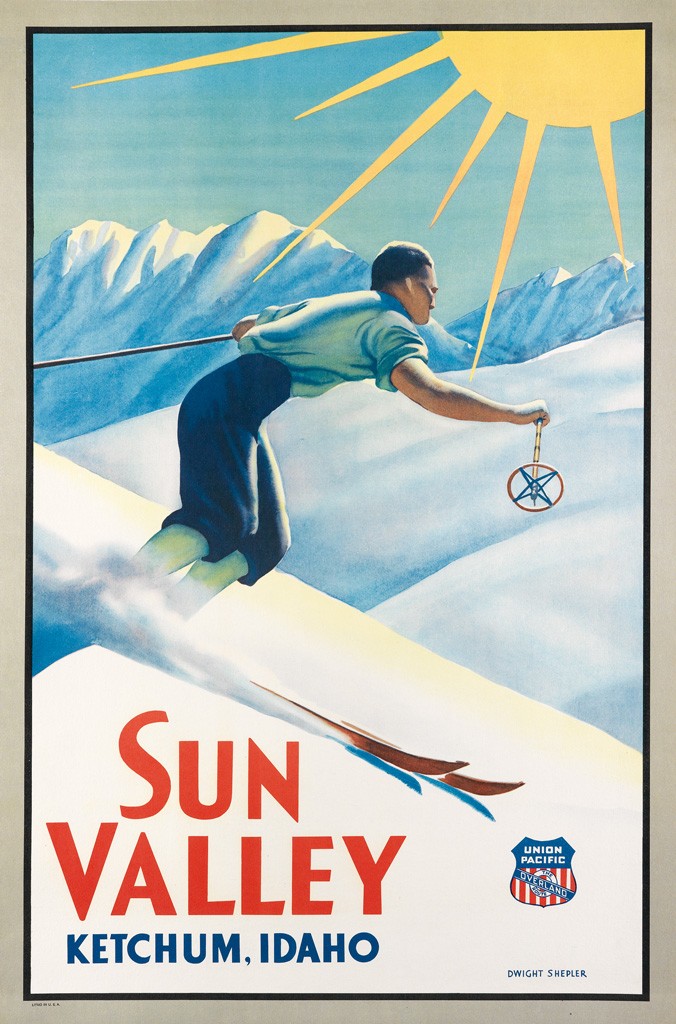 American agencies scrambled to find new and exciting places to lure East Coasters. From the catalogue: “Sun Valley was created as a destination resort to encourage people to ride the railroad out West. It was the brainchild of Averill Harriman, Chairman of the Board of Union Pacific Railroad, who was himself an avid skier. The Ketchum, Idaho area was scouted out by Count Felix Schaffgotsch who reported back to Harriman that ‘it contains more delightful features for a winter sports center than any other place I have seen in the United States, Switzerland or Austria.'” 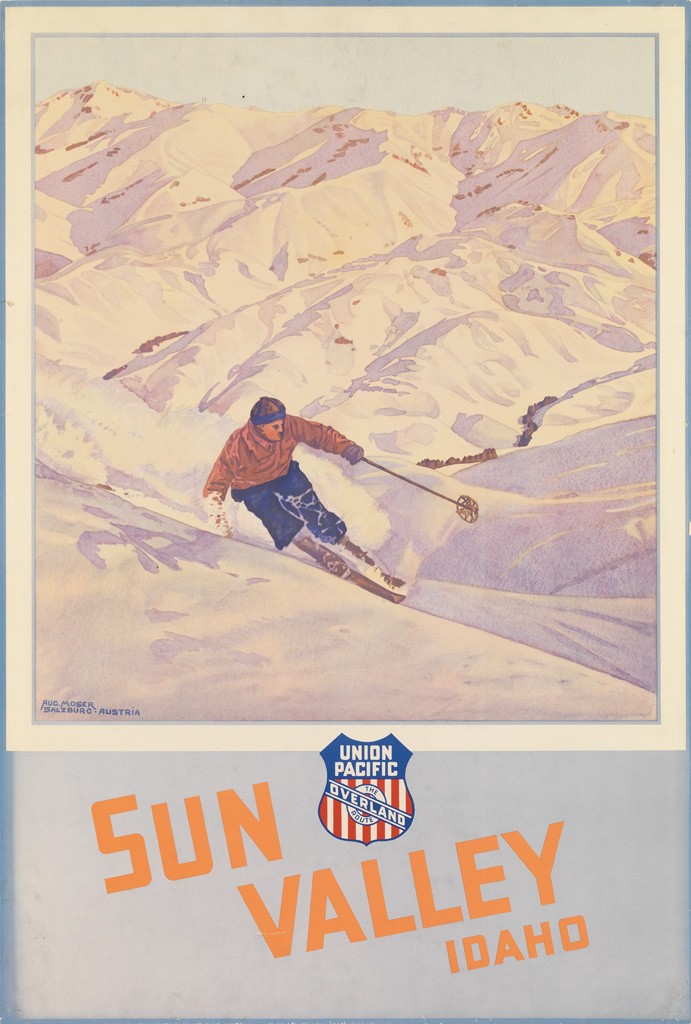 There is a wonderful assortment of strong art deco ski posters, as well as iconic works by the best graphic artists of the time including Roger Broders, Erich Hermes, Ludwig Hohlwein, Franz Lenhart, Sascha Maurer and Mario Puppo.

Join in vicariously with the full catalogue. 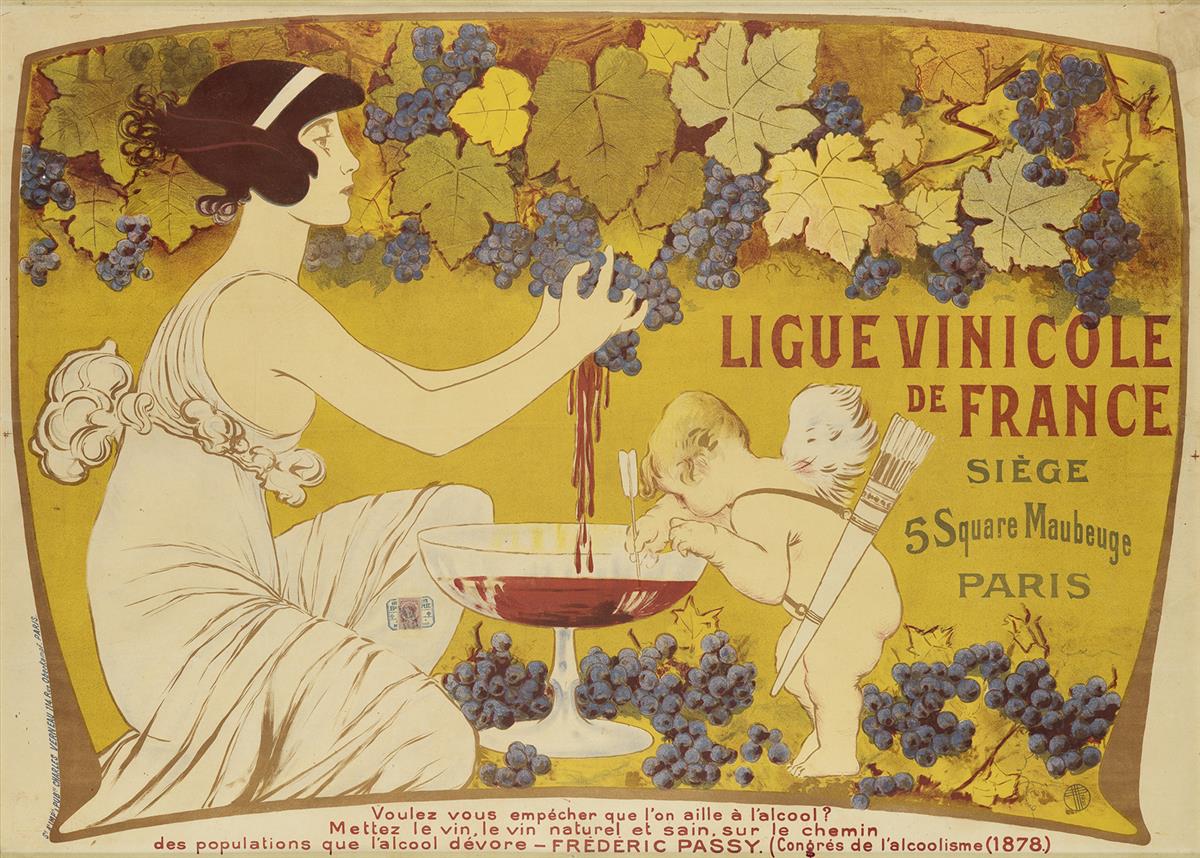 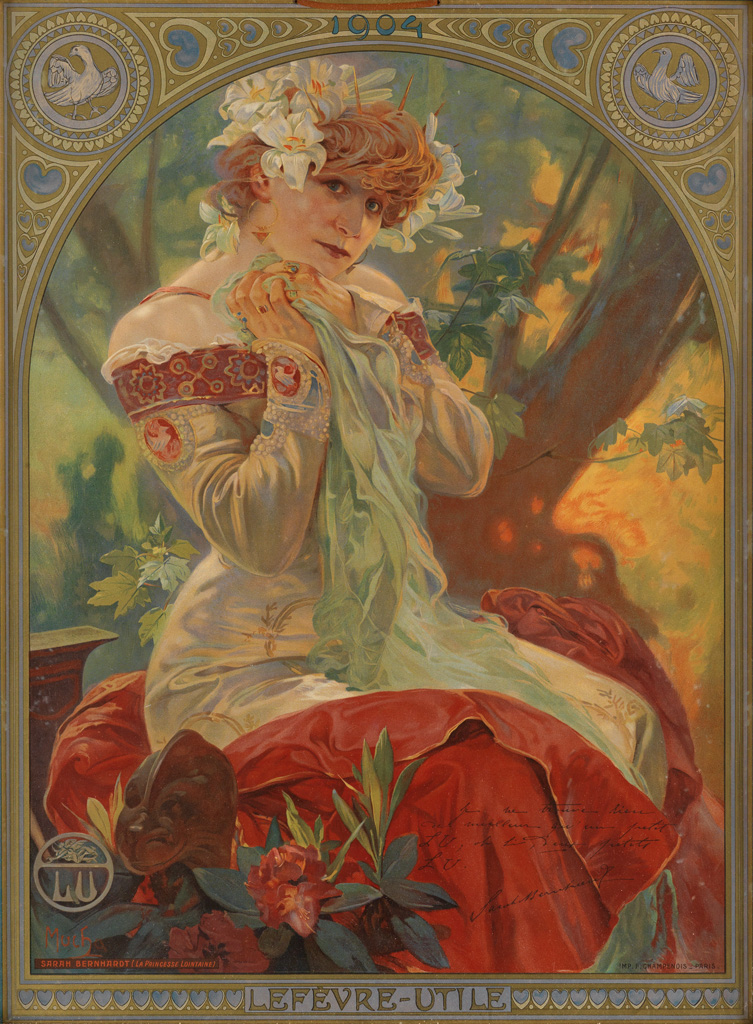 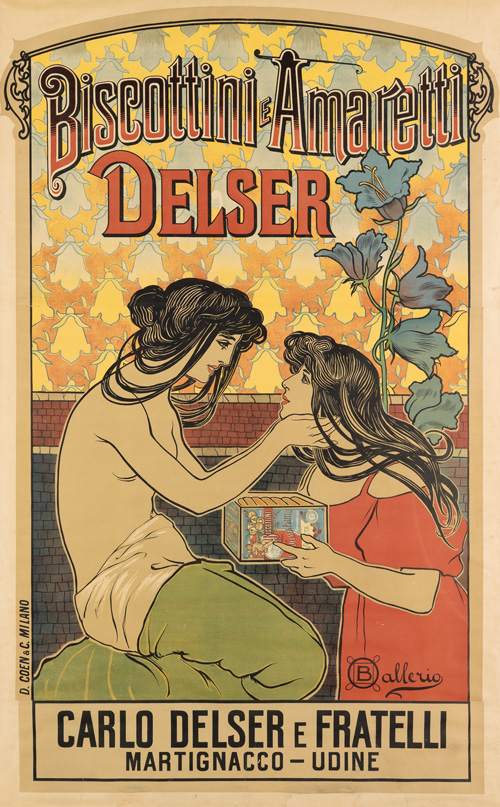