On May 14, 2019, we are brought a selection of 13 Ian Fleming first editions to auction. Fleming, a former intelligence officer and journalist, debuted the stylish James Bond in 1953 with Casino Royale. He went on to publish a Bond book every year for the rest of his life. Notably, Fleming was also a bibliophile, and founded the still-extant and influential journal The Book Collector.

Fleming’s books were so popular, and so effectively captured the world’s imagination, that nearly 70 years later James Bond’s star continues to rise, with 26 films, numerous posthumous volumes penned by other authors, and iconography that stands on its own. Featured below are four volumes from the run that deserve a special mention. Martini, anyone?

Casino Royale, in its unrestored dust jacket, will be the first of the run to cross the block. Ian Fleming’s premier Bond book was also his first novel, and the author had a hand in the cover design, which evokes the book’s card-playing scenes while hinting at a sense of danger. The ribbon around the laurel wreath on the cover reads “A whisper of love / A whisper of hate.”

Significant association copies are desirable among Fleming collectors, two of which appear in the sale:

The first, a copy of Goldfinger, 1959, presented to Sir Henry Cotton, MBE, a golf champion and friend of Fleming, includes a wonderful and appropriate inscription alluding to Bond’s golfing match with nemesis Auric Goldfinger: “To Henry Cotton, Who may be amused by p.p. 92-131! From Ian Fleming.” It is entirely possible that Cotton’s expertise and feedback for Fleming, himself an avid golfer, influenced those memorable passages.

Cold War cloak-and-dagger machinations, epitomizing the Fleming/Bond oeuvre, is well-played by an inscribed copy of Thunderball, 1961, presented to friend Charles Douglas Jackson. Jackson was the Deputy Chief at the Psychological Warfare Division at Supreme Headquarters Allied Expeditionary Force (SHAEF) at the time Fleming was working for Britain’s Naval Intelligence Division.

Jackson, who had worked at Time magazine briefly before the war, went on to work at Life, and clearly kept in touch with the author. The book is inscribed “To C.D. Jackson, Who says nice things! From Ian Fleming.” After Jackson’s death in 1964 it was revealed that he had been a CIA agent, making this personal memento a compelling association of two important figures in the British/American nexus of WWII and Cold War intelligence operatives.

The Man with the Golden Gun

The earliest printed copies of The Man With the Golden Gun, 1965, can be identified by the gilt gun stamping on the front cover, of which only 940 were produced before the publishers decided the cost prohibitive. The remainder of the printing issued without the gilded gun, making the copy in this auction the rarest of all Bond titles.

The Man With the Golden Gun was also Fleming’s thirteenth (and last) full-length Bond novel. The author died of a heart attack four months after its publication.

Do you have a first edition by Ian Fleming? 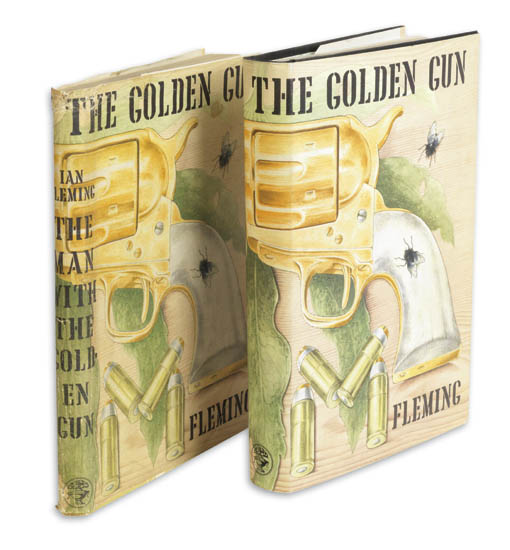