Our January 30 sale of African-American Art from the Johnson Publishing Company features nearly 30 artists making their market debuts. The collection represents a diverse range of American artists from numerous art movements, including AfriCOBRA and the Weusi Artist Collective. Here we’ve assembled a selection of ten artists whose work is set to cross the auction block for the first time.

Born in Chicago, Eileen Anderson was active in Los Angeles and Philadelphia in the 1970s. She exhibited at the Ankrum Gallery, Los Angeles, which lent two of her paintings to the 1972 group exhibition Los Angeles: A Panorama of Black Artists at the Los Angeles County Museum of Art.

Born in Atlanta, Georgia, Gloria Bohanon received a BS in Art Education in 1962, and an MA in Art Education in 1968 from Wayne State University. She also attended Los Angeles City College and California State College in Los Angeles. Bohanon was very much a part of the Los Angeles art scene by 1970—that year she had both a solo exhibition at Alonzo and Dale Davis’s Brockman Gallery and was part of Suzanne Jackson’s important exhibition Sapphire Show at Gallery 32. She was included in Samella Lewis and Ruth Waddy’s 1971 survey Black Artists on Art, Volume 2.

In the introduction to Now Dig This!, Kellie Jones notes that Bohanon also was included in the exhibition Black Mirror, organized by Betye Saar, the first devoted to women of color at Womanspace, the predecessor of the Woman’s Building. For thirty years, Bohanon was an influential educator as a professor of painting, printmaking and design at Los Angeles Community College. More recently, Bohanon was included in the 2009 exhibition at Loyola Marymount University Gallery 32 & Its Circle.

Born in Jackson, Mississippi, Robin Harper grew up in Detroit and began his career in the early 1970s. Known for his paintings of boxers, Harper’s impressive portrait of Jack Johnson was also featured on the cover of Ebony magazine in March 1978, an issue on boxing’s heavyweight champions. Artworks made under his current name, Kwasi Seitu Asante, have been included in several later museum group exhibitions including at the Museum of Fine Arts, Boston, the DeCordova Museum and Sculpture Park, and the Museum of the National Center of Afro-American Artists in Lincoln, Massachusetts.

Painter, printmaker, sculptor and educator Valerie Maynard has been included in numerous museum exhibitions, including solo exhibitions at the Beach Institute African American Cultural Center in Savannah, Georgia, and the Hammonds House Museum in Atlanta. Born in Harlem, Maynard studied painting and drawing at the Museum of Modern Art, printmaking at the New School and sculpture at Goddard College in Plainfield, Vermont, where she received an MA in 1977.

Maynard was also a resident fellow at the MacDowell Colony, Peterborough, New Hampshire, and the Women’s Studio Workshop in Rosendale, New York. She taught printmaking and sculpture at the Studio Museum in Harlem, Howard University, Jersey State College, Northeastern University, Baltimore School of the Arts and the College of the Virgin Islands, St. Thomas. Extensive profiles of Valerie Maynard are included in Lisa E. Farrington’s 2005 Creating Their Own Image: The History of African-American Women Artists and bell hooks and Leslie King-Hammond’s 1995 Gumbo Ya Ya: Anthology of Contemporary African-American Women Artists.

DC painter and educator Corrine Mitchell was born and raised in rural Virginia. Mitchell earned an associate’s degree from St. Paul’s College and began teaching art in the Mecklenburg public schools in 1935. She later earned a BA degree at Virginia State College in education in 1951. Mitchell moved to Washington, DC in 1956 where she taught art in the Montgomery County Schools, until her retirement in 1982.

Mitchell was an active member of the DC Art Association in the 1970s and 80s and was included their annual exhibitions at the Anacostia Museum and Center for African American History and Culture. She also was included in the large and important group exhibition Black Artists/South at the Huntsville Museum of Art in 1979. In 1992, she became the first African American artist to have a solo exhibition at the National Museum of Women in the Arts in Washington, DC. Her career was also profiled in Dr. Leslie King-Hammond and bell hooks’s 1995 survey Gumbo Ya Ya: An Anthology of Contemporary African American Women Artists.

Highlights from the Collection of the Johnson Publishing Co.

Detroit-born painter and illustrator Arthur Roland grew up in Birmingham, Alabama in the 1930s and 40s, and later served in the Korean War. Roland studied art at Wayne State University and the Meinzinger School of Art in Detroit. In 1974, he was listed in the directory of the Chicago Union of Black Artists, and by 1979, he was one of their elected officers. He later taught art at Wayne State Community College in Detroit. According to his memorial web site, his artwork is found in the collections of the Arbor City Hall, the Archdiocese of Detroit, the Carnegie Institute, Howard University, the University of Southern Alabama, the Wayne County Commissioner’s Office and many private collections.

Mixed media and fabric artist Jim Smoote has had a long career and has exhibited internationally—including in the important 1998 national traveling exhibition and catalogue Spirits of the Cloth: Contemporary Quilts by African American Artists at the Mint Museum of Art, Charlotte, North Carolina. Born in Grenada, Mississippi, Smoote moved to Chicago in 1956, and was educated in the Chicago public school system. He earned both a BFA and an MFA from the School of the Art Institute in Chicago with degrees in Textile Design and Art. The now-retired Smoote taught elementary and high school art in the Chicago public schools for 35 years. He was included in Dr. Caroline Mazloomi’s 2010 monograph Journey of Hope: Quilts Inspired by President Barack Obama.

Born and raised in Arizona, Francis Sprout studied studio art and art education in the School of Art at the University of Arizona in the 1960s. He enrolled in the MFA program of the University of California, San Diego, in the fall of 1970, where he progressed from figuration into abstraction, and learned of Islamic ornamentation and imagery in his art history studies of North African culture. Azo is part of a body of 13 vivid acrylic paintings that became Sprout’s graduate thesis exhibition at UCSD in 1972. He continued to paint large scale, color field abstraction through the 1970s.

Sprout had a long career as a painter, printmaker and art educator. He taught visual art through the 1980s in Denver, first at the University of Denver, and then became a tenured professor at Metropolitan State College. He took a sabattical, returning to Los Angeles in 1984, and earned an MA in African Studies with a concentration on African art history from UCLA in 1990. Sprout went back to teach at Arizona State University before moving to Purchase, New York, with his wife, museum director and curator Lucinda Gedeon, where he taught at Purchase College and the Pratt Institute of Art. They then moved to Vero Beach, Florida, where Sprout continued to teach and paint. Sprout exhibited widely and his artwork is in the collections of Arizona State University Museum of Art, the Neuberger Museum of Art, the Johns Manville Corporation, Atlanta, and Pfizer Learning Center, Rye Brook, New York.

Born in Birmingham, Alabama, painter, printmaker, musician, textile artist and designer José Williams earned his BA in printmaking from the University of Illinois at Chicago, and his MS in Visual Design from the Illinois Institute of Design in Chicago. Williams taught art at Northwestern University in Evanston, Illinois; Southeast Community College, and the Dante School in Chicago. He ran the AFAM Gallery and served as director of the South Side Community Art Center in Chicago in the early 1970s. His work was been featured in numerous group exhibitions through the 1980s including Atlanta University, the South Side Community Art Center, AFAM Gallery, and the ADA Gallery in Richmond, Virginia.

Born in Philadelphia, Barbara Zuber was raised in New York. She was the first African-American woman to graduate with a Bachelor of Fine Arts from Yale University—she also studied at the Art Students League and at New York University. She began a teaching career in New York public schools, community centers and at the Harlem Hospital in the Child Psychiatry Department. Her artwork focuses on celebrating the daily life of African Americans with an emphasis on children. Her art illustrated the 1969 children’s book Brown is a Beautiful Color written by Jean Carey Bond.

Zuber exhibited in the 1970 15 Afro-American Women at North Carolina A&T State University and the 1972 A New Vitality in Art: The Black Woman at Mount Holyoke College. She also has exhibited her work at the Indianapolis Museum of Art, the Gibbes Museum of Art, and the Montgomery Museum of Fine Arts. In 1999, New York State commissioned Zuber to create the painting for The Adoption Album: Our Children, Our Families poster.

Introduction to the Catalogue for the Johnson Publishing Co. Collection. 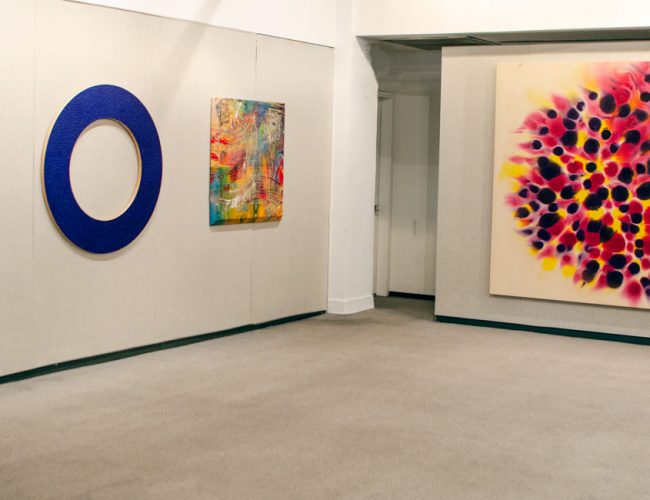 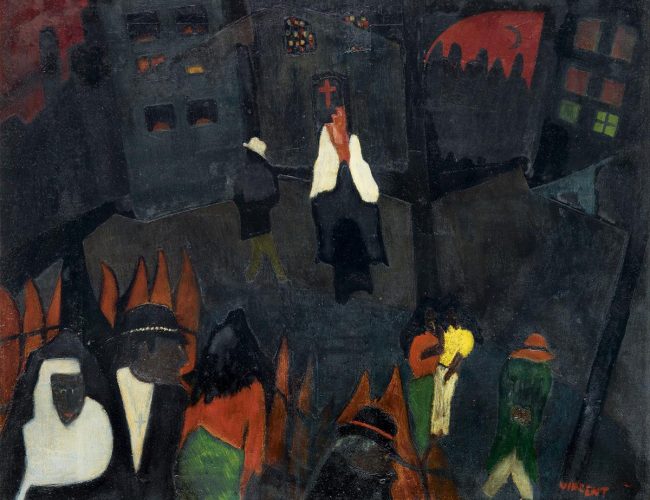