“I cannot begin to project the meaning of my work in specific terms, for [my] paintings, at their best, are multi-faceted visual complexes whose many aspects are pregnant with as many disparate meanings as there are viewers.”

Born 1915 in Eustis, Florida to Luther and Alice Williams Smith, Hughie Lee-Smith spent his formative years in Atlanta, GA, and Cleveland, OH. Lee-Smith was a prolific painter, educator, arts administrator whose career spanned seven decades. He worked for the Federal Arts Project of the Works Progress Administration (WPA), which shaped his mid-career practice. The product of the New Negro Movement — Harlem Renaissance, Lee-Smith was influenced by a middle-class upbringing that fostered his love of fine art and the humanities. Under the nurture of his mother and grandmother, he attained a formal art education, culminating in a Bachelor of Art from Wayne State in 1953, and being awarded first prize for painting from the Detroit Institute of Arts in the same year.

Along the way, he studied at the Cleveland Museum of Art, the Cleveland School of Art (now the Cleveland Institute of Art), the John Huntington Polytechnic Institute, and the Art School of the Detroit Society of Arts & Crafts (Center For Creative Studies, College of Art & Design). His study, teaching, and participation in the Gilpin Players, an acting troupe of the Cleveland Karamu House Artist Association, led to his blossoming passion for dance, music, literature, and theater, which is visible in his late-career work.

In 1938, Hughie Lee-Smith graduated with honors from the Cleveland School of Art and worked for the Federal Arts Project. Like many WPA artists, he was concerned about the contribution art could make to the struggle for social justice and racial equality. Works like Untitled (Sketch of a Boy), a scarce example of a drawing from his Cleveland period of the late 1930s, is an intimate drawing of a seated boy. It appears to be a preliminary study for the 1938 oil painting, Portrait of a Boy — executed while also teaching art at Karamu House in Cleveland

Lee-Smith received a WPA commission in lithography. From there, he was soon recognized for his inclusion in Alain Locke’s The Negro in Art, published in 1940. Portrait of a Boy is an important early work in Lee-Smith’s career-long interest in depicting isolated youth. The Depression enabled more American artists to embrace social realism and completed paintings that were socially and politically engaging. Lee-Smith rejected the American scene painting of the time and showed the struggles of young African-American men in their harsh, new world.

In 1943, Hughie Lee-Smith was drafted into the US Navy and stationed at the Great Lakes Naval Base, near Chicago, Illinois. His military experiences on the shores and beaches of Michigan and Ontario shaped his artworks from the early 1950s. Works like Slum Song and Untitled (Youth on a Lakeshore) are majestic lakeside scenes that were largely created from his imagination and reflect the existentialism of youth in the 1950s. Untitled (Youth on a Lakeshore) depicts three young men, isolated and forlorn. As in many of these paintings, Lee-Smith focuses the viewer’s gaze on a central young protagonist — often a quasi-self-portrait. The tranquil scene does not appear interrupted by a windblown white cloth or a passing tanker. Lee-Smith defines the space and mood with many of his signature elements: a rope, a coiled wire, separated poles, a distant shoreline at the horizon, and a beautiful but foreboding sky of cumulus clouds.

In 1958 Lee-Smith moved to New York City and taught at the Art Students League for 15 years. His work from this period consists of beautifully painted but stark urban scenes. Aftermath is a significant painting from this period and was part of the Johnson Publishing Co. Collection, one of the nation’s most celebrated corporate collections of African American Art. It epitomizes Lee-Smith’s unique view of urban decay, a vision of a modern, existential landscape with Surrealist undertones. It appears closely related to Slum Lad, which resides in the collection of the Flint Institute of Arts. Aftermath depicts the same background of a crumbling facade. The three bright pink and yellow balloons in the foreground suggest the recent presence of young people, alienation, and a fleeting, fragile moment. Lee-Smith’s fluttering flags and a distant city on the horizon further denote an expanse of space.

In the 1930s, Hughie Lee-Smith was a faculty member of Karamu House in Cleveland, the oldest African-American theater in the United States. In his time at Karamu House Lee-Smith founded an inter-racial modern dance troupe. His passion for the arts extended to dance, music, literature, and theater eventually, playing a significant role in his later paintings. Prelude and a study for it Bondage, which depicts the same classical statue of a male torso, epitomizes the Surrealism found in his late-career paintings. The classical architecture and sculpture suggest the enigmatic Surrealism of a Fellini film. The peaceful atmosphere of a sun-drenched afternoon is punctuated by billowing clouds and fluttering ribbons and emphasizes the frozen motion of a young woman. Prelude represents the final period of Lee-Smith’s body of work — his enigmatic and isolated figures are now actors in landscapes full of intrigue and beauty.

Continuing in the same vein Curtain Call and Quandary share in the inspiration of the theatre and the modern masters. Curtain Call is an excellent example from the artist’s late series of paintings depicting musicians or actors in a staged environment. Quandary demonstrates Lee-Smith’s consistent exploration of narrative and identity. The compressed space, architectural elements, and faceless mannequin inhabit a metaphysical, dream-like space and reflect the influence of Giorgio De Chirico. In the Hughie Lee-Smith papers, Archives of American Art, Smithsonian Institution, Lee-Smith wrote in a 1988 letter to Lowery Stokes Sims, “those who exerted an extraordinary influence of the direction of my painting were: Steumpfig, Evergood, the Berman Brothers, Peter Blume, Hopper, Balthus, and particularly Giorgio De Chirico.” The sun-drenched light and floating balloon reinforce the frozen moment, whilst the arrows illustrate the choices an artist has to make in defining a subject. Full of intrigue and beauty, Quandary is an excellent example of the final period of Lee-Smith’s oeuvre.

Over his decade-spanning career, Hughie Lee-Smith’s artwork stood unclassifiable as he did not follow artistic trends. The subtlety and complexity of his practice contributed to his obscurity on the East Coast and the regional art market. As an educator and artist living through the 1960s and 70s, he became actively involved in the discussions over what form a “Black aesthetic” might take. The question of race is often not overtly confronted in his work but he used ambiguous white and black figures to question human existence and our place in it.

Do you have a work by Hughie Lee-Smith we should take a look at? 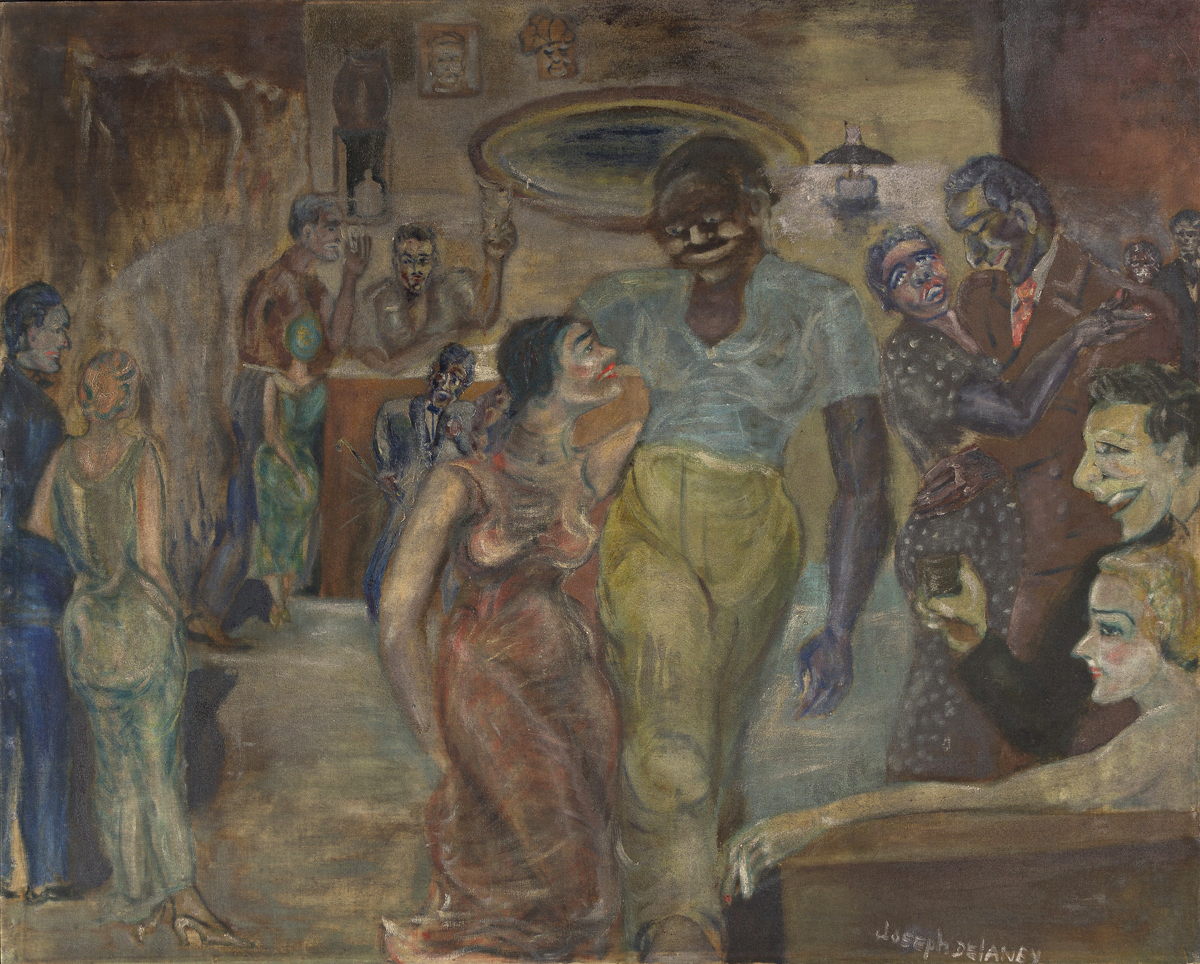 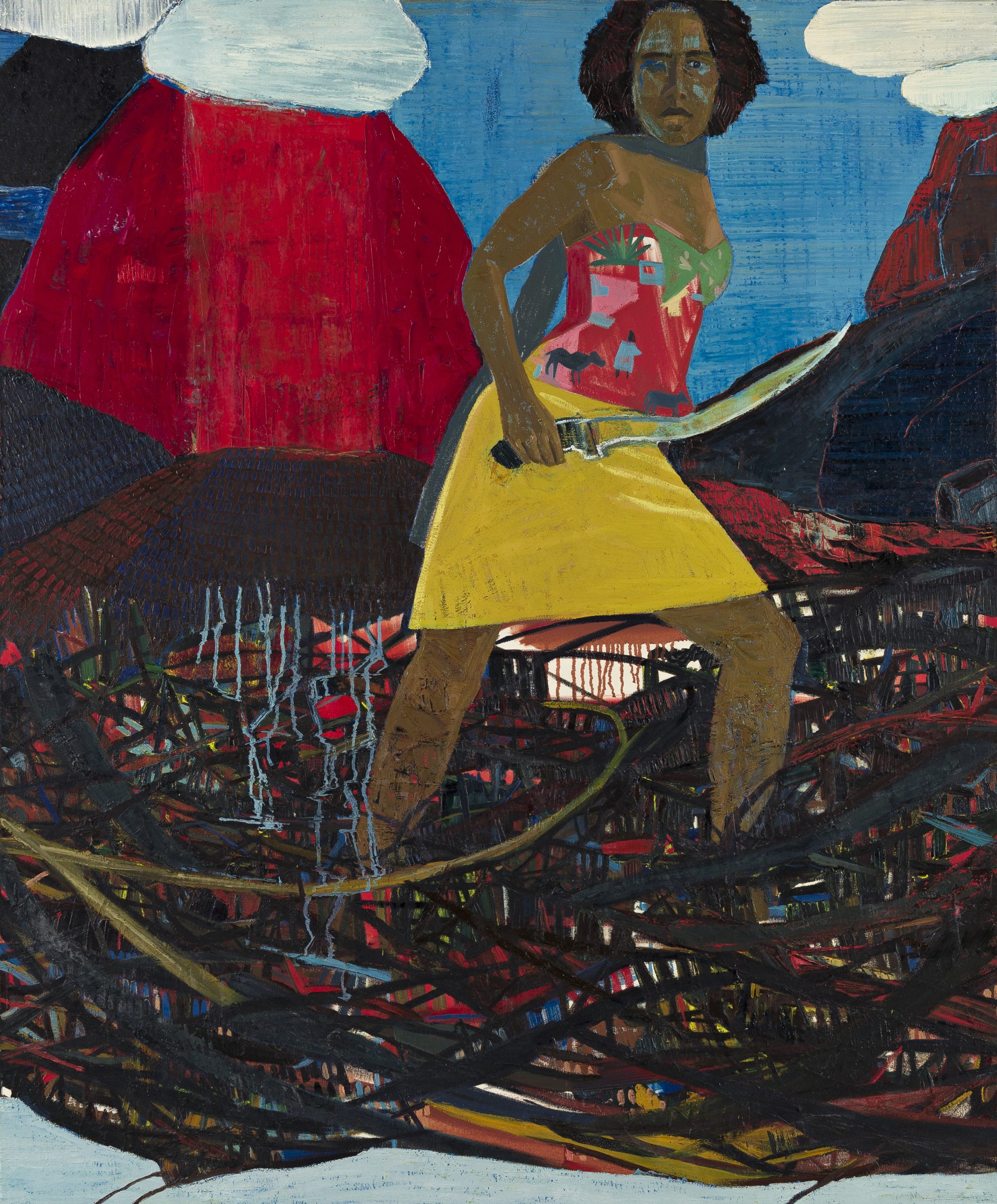 Happening March 28 — Collectors on Collecting: A Conversation with Bernard I. Lumpkin of “Young, Gifted and Black” Events
March 14, 2022