An accomplished graphic artist and sculptor, Elizabeth Catlett was known for her poignant depictions of African-American life, Mexican life (after her relocation to Mexico following a grant from the Rosenwald Foundation) and the female experience. Our December 15 auction of African-American Fine Art features works from Catlett in multiple mediums, providing an excellent tour through the artist’s experimentation and shifts over the course of her career.
Born in Washington D.C., Catlett would go on to study at Howard University under Loïs Mailou Jones (whose work is also featured in this auction), and receive an MFA in sculpture from the University of Iowa, where she was encouraged to experiment with medium and form. 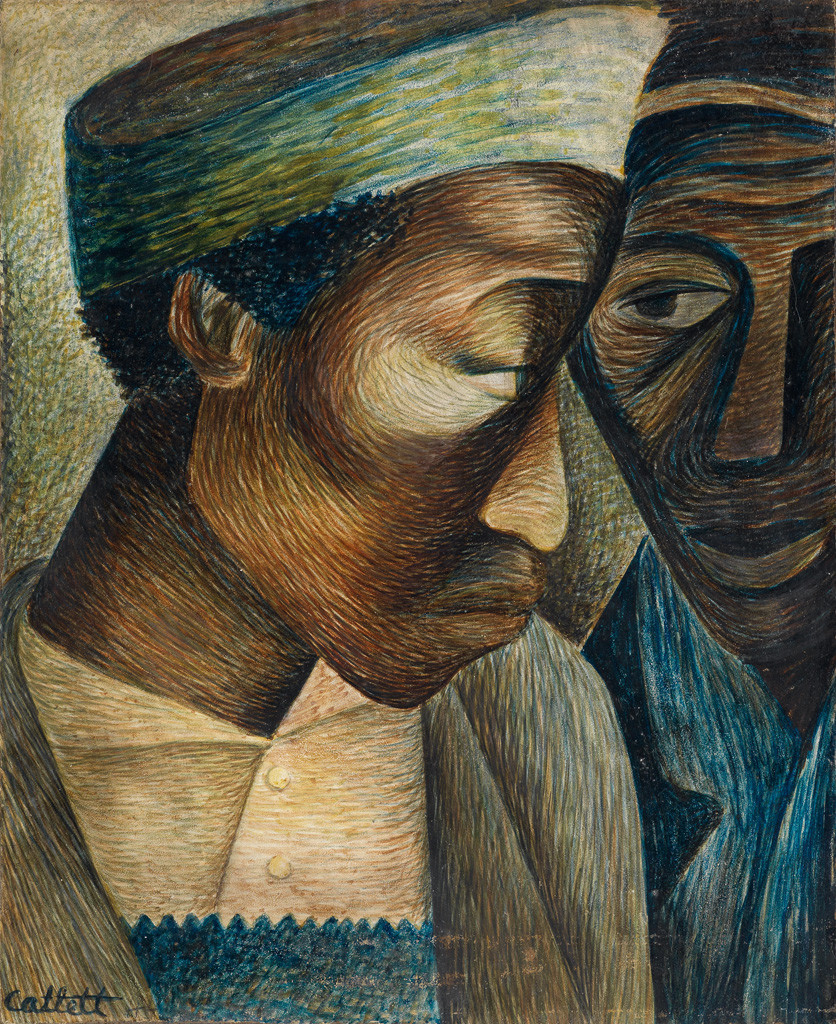 We believe this exciting find is the first painting by Elizabeth Catlett to come to auction. Paintings from Catlett’s New York period, prior to her move to Mexico in 1946, are very scarce. We have located or found records of only eight other paintings in private collections. Many are small portraits, similar to Friends.

Melanie Herzog, Art Historian and author of several books on Catlett, illustrates three oils, Pensive Portrait, 1945, Woman, circa 1945, and Trash, oil on canvas, 1946, and describes two other paintings, Protection and Margaret and Gayle that are now presumably lost. Herzog additionally lists Black Worker, 1946, and Woman Playing Guitar, 1947, that were shown with the three illustrated works in Catlett’s exhibition at the Caribbean Cultural Center in 1996. In 2011, Sharecropper, oil on canvas, 1946 was exhibited at the Studio Museum in Harlem. Other known paintings date from her association with the Barnett-Aden Gallery, Washington, DC, and are found today in the Barnett-Aden Collection and the Margaret and John Gottwald Collection, Richmond, VA. Their 2012 exhibition at the Virginia Museum of Fine Art, “Making History: 20th Century African-American Art,” included a tempera painting Hats by Suzy White, circa 1937, and an oil on canvas portrait, Untitled, 1947.

In the early 1940s, Elizabeth Catlett lived in New York between her time in Chicago and teaching at Dillard University. Elizabeth Catlett and her husband Charles White returned to New York in 1943 after he finished a year at Hampton University painting his mural Contribution of the American Negro to Democracy with a Julius Rosenwald grant. Herzog describes how Catlett’s teaching at the George Washington Carver School gave her little time to her own artwork but she continued to paint. Teaching children in Harlem gave Catlett an intimate view of the struggles of working class families, and further added to the social and political consciousness of her artwork. 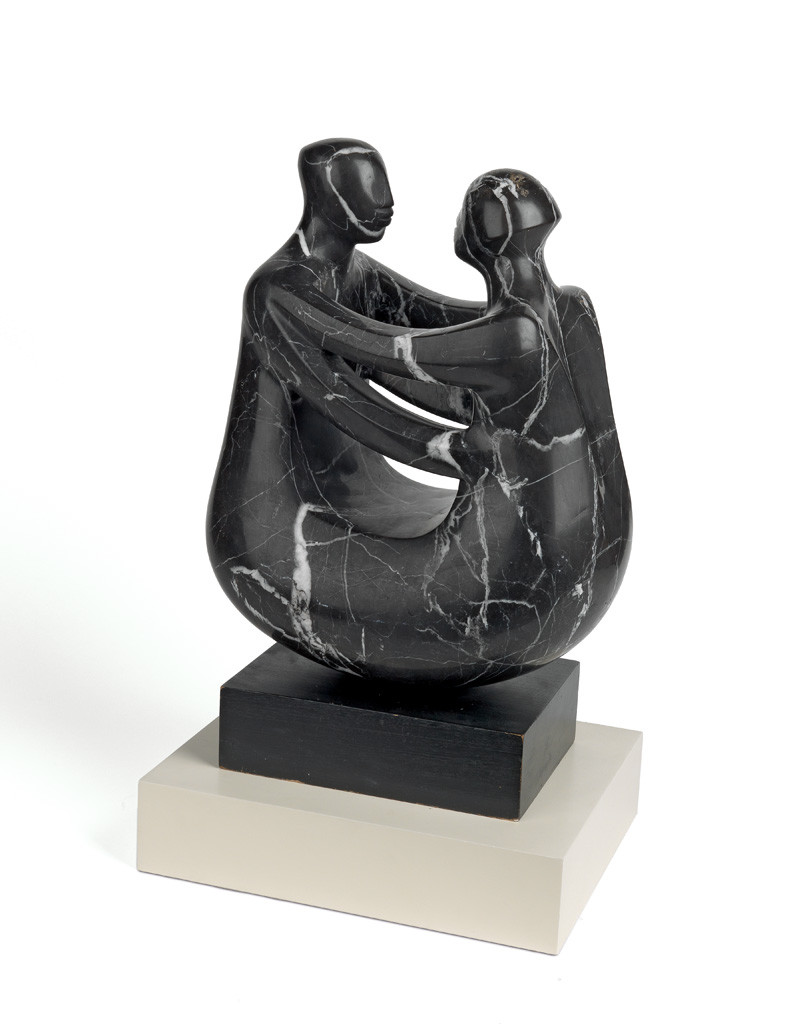 Lot 91: Elizabeth Catlett, Recognition, black marble, mounted on wooden base, 1970.
Estimate $120,000 to $180,000.
Recognition is a striking sculpture that epitomizes Elizabeth Catlett’s masterful mid-career work, and makes a powerful figurative statement. By 1970, Catlett had successfully incorporated more abstract qualities and social commentary into her sculpture. Recognition aesthetically speaks to the bonds of relationships and our interdependence. The title reinforces the social and political consciousness of the times. Jeff Donaldson’s commentary in the catalogue for Catlett’s 1948 solo exhibition at the Studio Museum in Harlem strongly reinforces this sentiment, “Black and Third World Peoples need to be made actively conscious of their commonality of heritage and interests.”
Recognition‘s beautiful natural material gives it additional meaning. This Mexican marble has deep tonal qualities with densely woven veins throughout, distinguishing it from the two other versions of this subject, a translucent orange onyx, also from 1970, and the later highly polished black marble from 1972. Catlett’s work in marble, onyx and mahogany were all chosen to bring out the material’s inherent beauty, and relate the work to their historical sources: African and Mexican indigenous art. Here, the exotic material and the curved forms relate to ancient Olmec sculpture.
According to Melanie Herzog, the artist’s attention to the natural material was very deliberate; Catlett stated, “I like to finish sculpture to the maximum beauty attainable from the material from which it is created.” Elizabeth Catlett later would use Recognition to describe her process to fellow artist Samella Lewis, “When I began my work on Recognition, I knew that I wanted to use a triangular piece of onyx that I had in my studio. Even though I had the stone and could envision the shape of the work, I preferred to make a small model.” 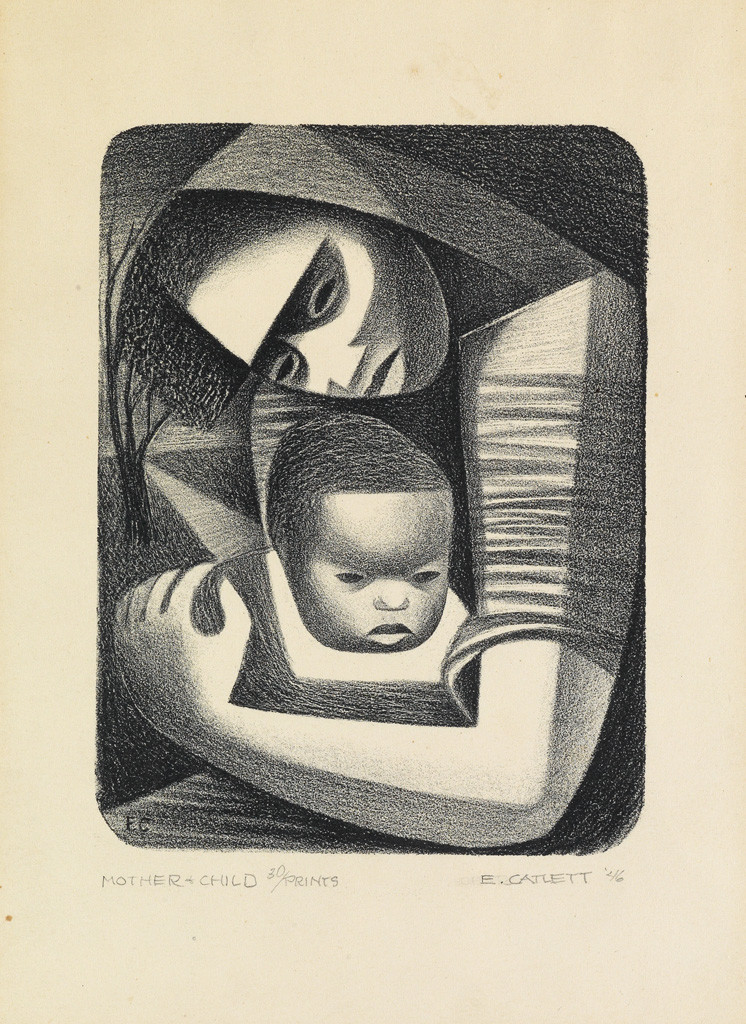 Lot 22: Elizabeth Catlett, Mother and Child, lithograph, 1944. Estimate $7,000 to $10,000.
This beautiful print is a very scarce and early example of the artist’s work in lithography. Elizabeth Catlett’s first foray into printmaking was during 1944-45 when she studied lithography with Harry Sternberg at the Art Students League in New York. More of Catlett’s lithographs, screenprints and woodcut works can be seen below. 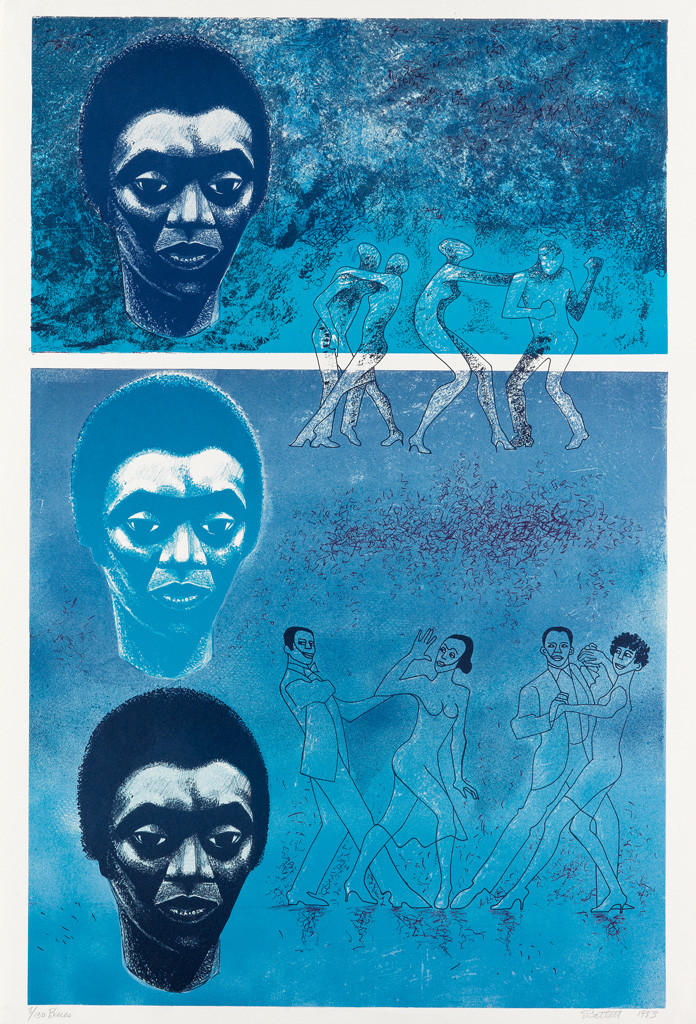 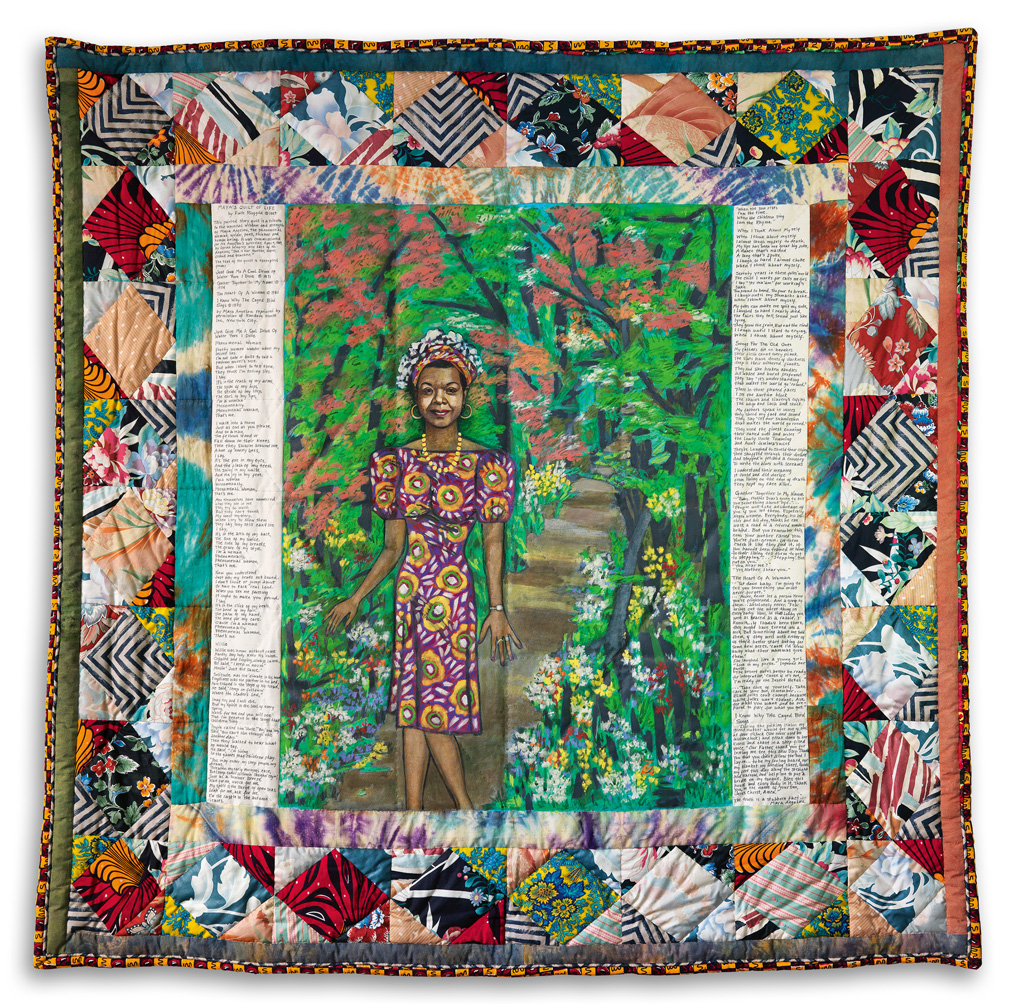