A very formal letter by Charles Dickens to Lord Robert Grosvenor was a highlight of our March 22 auction of Autographs. 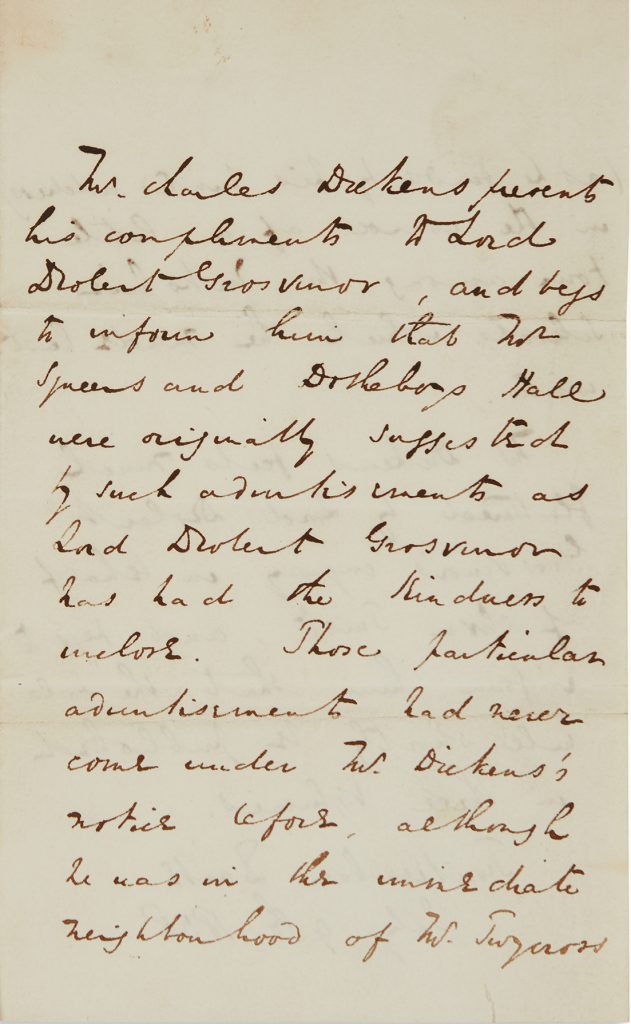 The letter, dated July 9, 1838, was written in the third person, a nineteenth-century signal of respect. In addition to assuring Lord Grosvenor that “Oliver Twist will shortly be published,” Dickens thanks the Lord for sending him clipped newspaper advertisements for boarding schools that promised “no vacations,” effectively turning them into storage houses for unwanted and illegitimate children. He credits clippings such as these as the inspiration for his influential 1838-39 serialized novel Nicholas Nickleby.

“. . . Mr. Squeers and Dotheboys Hall were originally suggested to [Dickens] by such advertisements as Lord Robert Grosvenor has had the kindness to enclose. Those particular advertisements had never come under Mr. Dickens’ notice before, although he was in the immediate neighborhood of Mr. Twycross (as he finds by his printed address) in the course of a little tour among the Yorkshire schools which he made last winter.” 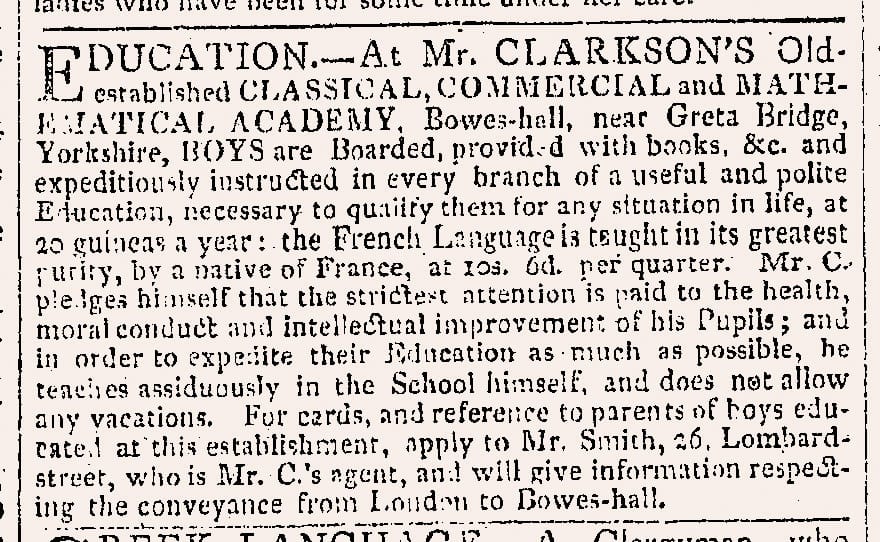 An 1817 advertisement for Bowes Hall in The Times. Courtesy of the British Library.

EDUCATION — At Mr. Clarkson’s Old-established CLASSICAL, COMMERCIAL and MATHEMATICAL ACADEMY, Bowes-hall, near Greta Bridge, Yorkshire, BOYS are Boarded, provided with books, &c. and expeditiously instructed in every branch of a useful and polite Education, necessary to qualify them for any situation in life, at 20 guineas a year: the French Language is taught in its greatest purity, by a native of France, at 10s. 6d. per quarter. Mr. C. pledges himself that the strictest attention is paid to the health, moral conduct and intellectual development of his Pupils; and in order to expedite their Education as much as possible, he teaches assiduously in the School himself, and does not allow any vacations. For cards, and reference to parents of boys educated at this establishment, apply to Mr. Smith, 26 Lombard-street, who is Mr. C.’s agent, and will give information respecting the conveyance from London to Bowes-hall.

It is thought that this advertisement from The Times in 1817 may have been one of the clippings given to Dickens by Lord Grosvenor, as the author leans heavily on the text in Chapter 3 of Nicholas Nickleby:

Education.—At Mr. Wackford Squeers’s Academy, Dotheboys Hall, at the delightful village of Dotheboys, near Greta Bridge in Yorkshire. Youth are boarded, clothed, booked, furnished with pocket-money, provided with all necessaries, instructed in all languages, living and dead, mathematics, orthography, geometry, astronomy, trigonometry, the use of the globes, algebra, single stick (if required), writing, arithmetic, fortification, and every other branch of classical literature. Terms, twenty guineas per annum. No extras, no vacations, and diet unparalleled. Mr. Squeers is in town, and attends daily, from one till four, at the Saracen’s Head, Snow Hill. N.B. An able assistant wanted. Annual salary £5. A Master of Arts would be preferred.” 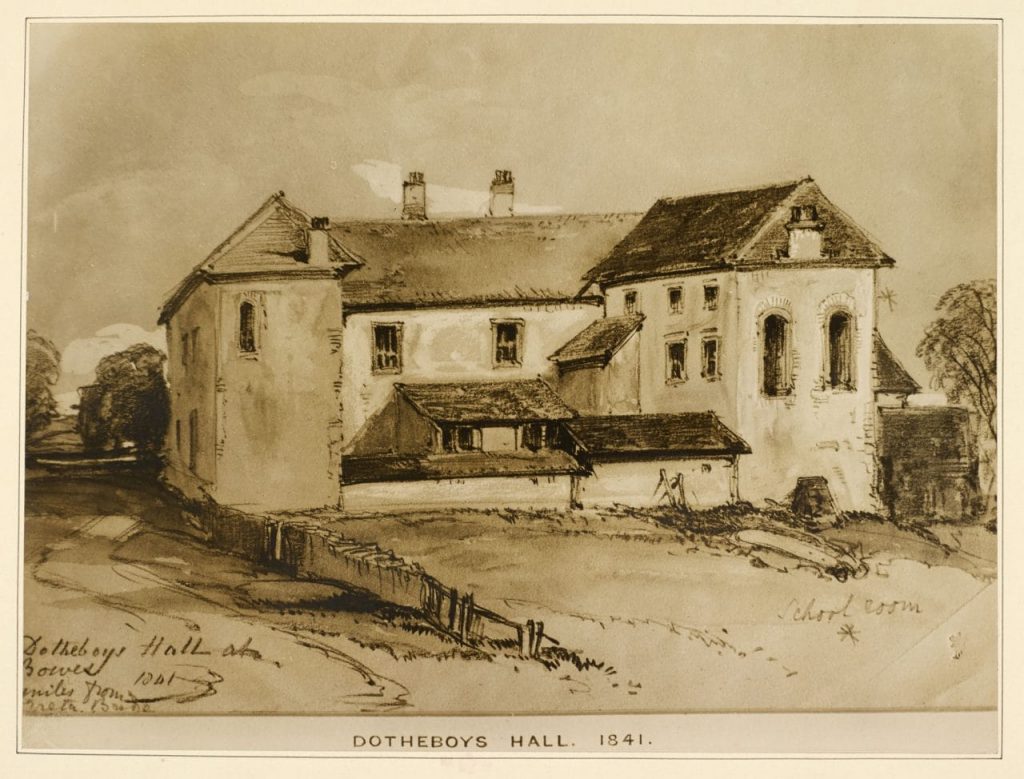 Bowes Academy, renamed Dotheboys Hall after the publication of Nicholas Nickleby. Courtesy of the British Library.

As he mentions in the letter, Dickens took a trip in January of 1838, to visit the most egregious schools in the Yorkshire area. He was especially impressed by the imposing Bowes Academy, run by a cruel headmaster named William Shaw–the very school advertised in the clipping. Shaw achieved infamy when, in 1823, eight boys at his school went blind after being locked in a wash-house for months at a time. He was fined £600, or about £250,000 today, for gross negligence. The similarities between Shaw at Bowes Academy and the fictional Wackford Squeers at the equally fictional Dotheboy’s Hall have been noted by scholars since the book’s publication. For one thing, both Shaw and Squeers were missing an eye.

But other nightmarish boarding schools with cruel headmasters dotted the nation. In his letter to Lord Grosvenor, Dickens mentions a Mr. Twycross, who ran a school at Winton Hall in Westmoreland, suggesting that Squeers may not have been wholly based on Shaw after all. We may never know, and as The Guardian points out, “fans of Nicholas Nickelby do still have the words of the author’s own preface as a guide. ‘Mr. Squeers is the representative of a class, and not of an individual,’ Dickens wrote, to indicate that he saw the unpleasant schoolmaster as a composite figure and, perhaps, to put readers off the scent.”

In any case, shortly after the publication of Nicholas Nickleby, nearly all the infamous Yorkshire boarding schools were closed.

Browse the complete results for March 22. 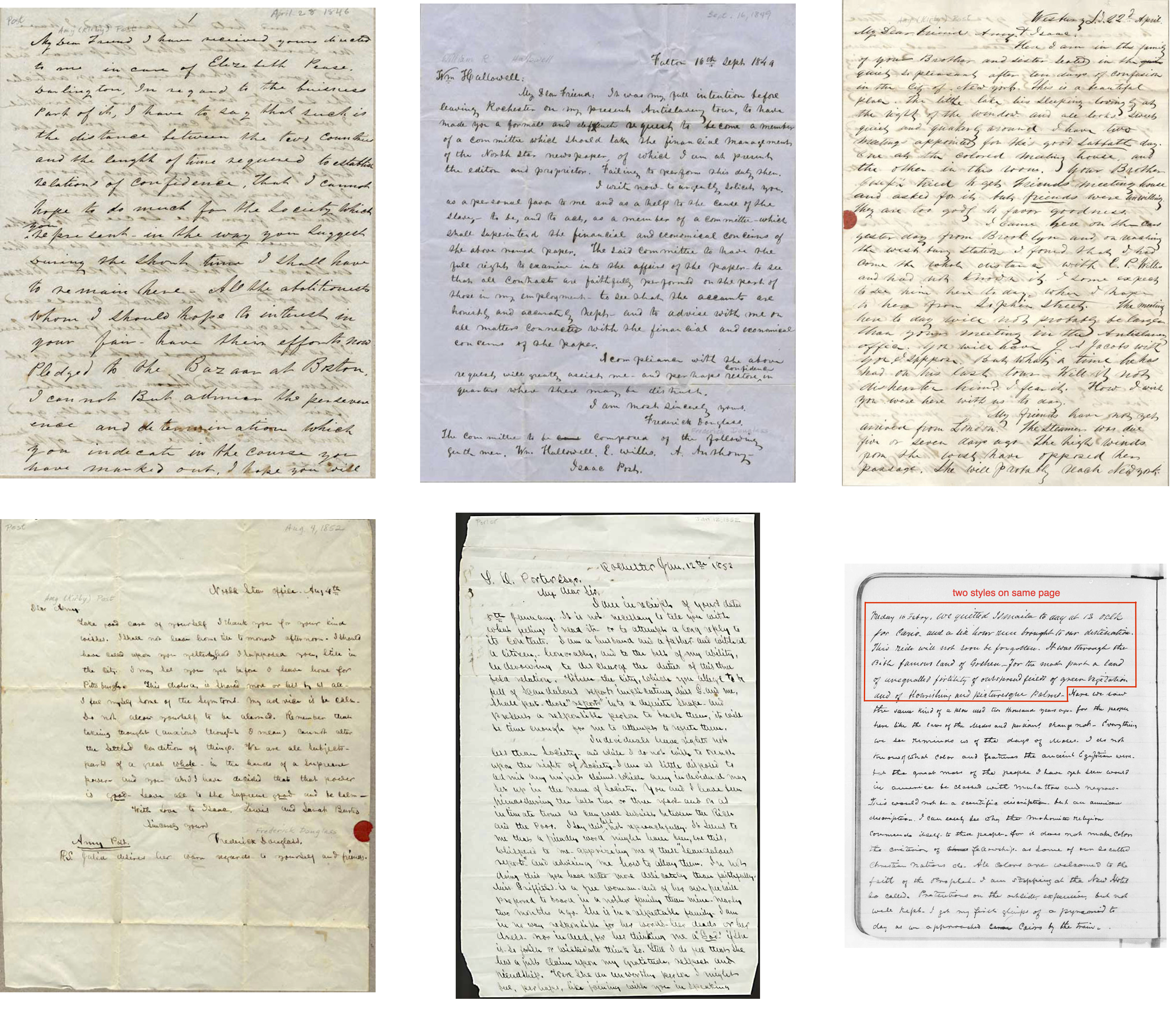