George Cruikshank is most famous for his illustrations for several first editions (in book form) by Charles Dickens, including Sketches by Boz and Oliver Twist. Decades before, he illustrated a satirical periodical titled The Scourge, or, Monthly Expositor of Imposter and Folly, which ran from 1811 to 1816. Our 19th & 20th Century Literature sale features a complete set of The Scourge, only the third ever to come to auction. The complete set is rare because very few copies of the final twelfth volume exist, as subscription numbers had fallen dramatically. 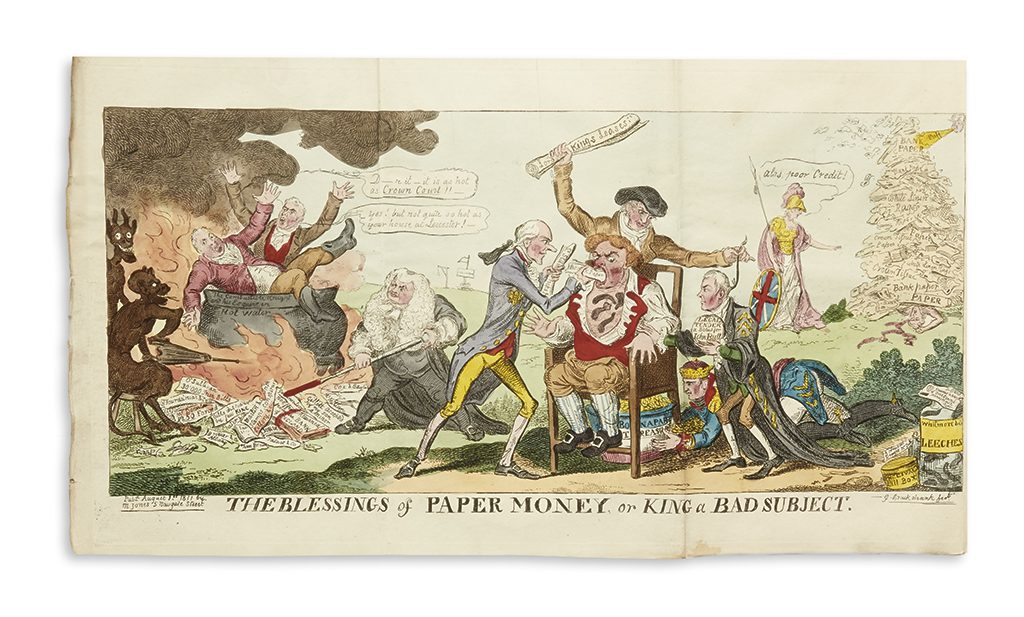 George was only 19 years old in 1811 when he began illustrating for The Scourge. A commentary of the exsanguination of the British mint into French pockets appeared in the August 1 issue of that year. The Blessings of Paper Money, or King a Bad Subject depicts “a figure of Napoleon crowned is introduced in the act of withdrawing a large pan filled with gold from John Bull, who is being dosed with paper money, his chest covered with leeches.”

Robert G.W. Kirk and Neil Pemberton continue in Leech, “the two physicians represent parliamentarians responsible for a bill to depreciate the value of British bank notes, threatening to drain the wealth of the nation. Napoleon reveals his parasitic nature by withdrawing a pan filled with gold coins from underneath John Bull.” 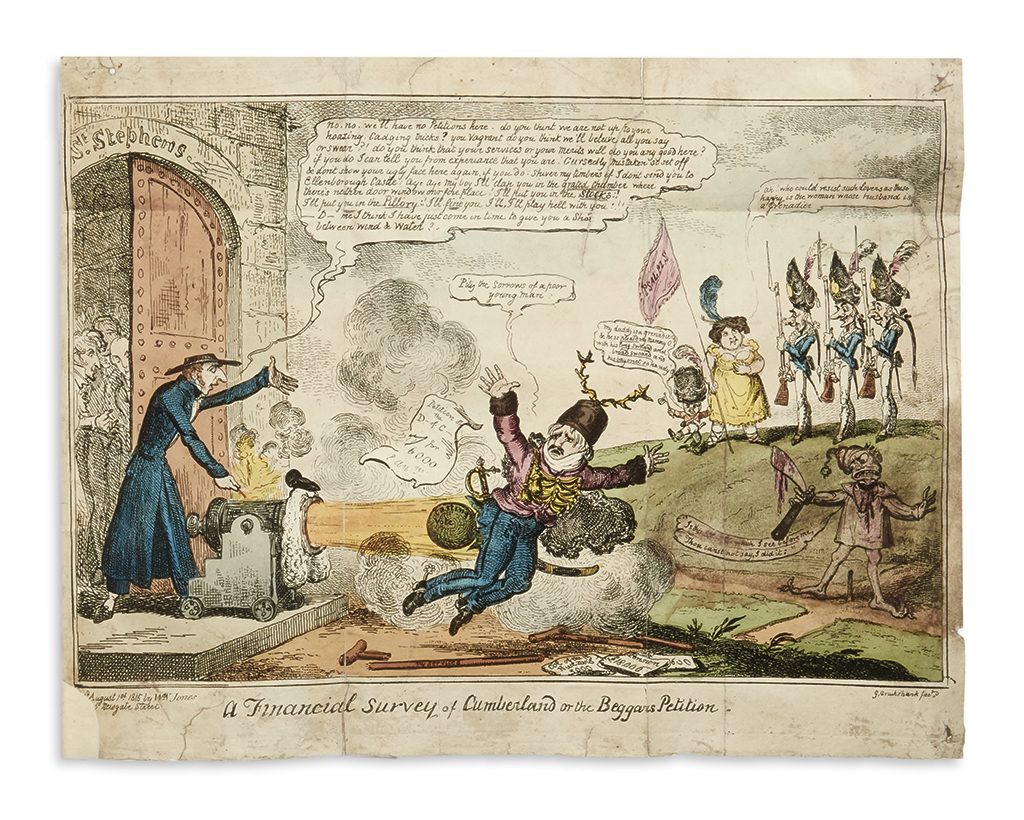 The present set is especially interesting because it contains one of few known copies of the original, uncensored plate of A Financial Survey of Cumberland or the Beggar’s Petition, 1816. The image depicts the Duke of Cumberland, who had, the previous year, married a woman of questionable morals (who also happened to be his cousin). The couple was barred from the royal court not only for the Duchess’s promiscuity but for the Duke’s rumored history of incestuous and murderous behavior. He is shown here being expelled from Parliament by a cannonball that has tattered his pants.

Tamara L. Hunt gives the context for the censorship: “The new Duchess looks longingly at three grotesque Grenadiers, saying ‘Ah! who could resist such Lovers as these. Happy is the woman whose husband is a Grenadier.’ To emphasize further the Duchess’s questionable past, Cumberland wears a cuckold’s horns. Lord Cochrane, whose vote tipped the scales to defeat Cumberland’s grant, fires a cannon at the Duke, expelling him from Parliament. The large black area on the right of this self-censored print covers the figure of Cumberland’s late valet, who allegedly cut his own throat after unsuccessfully trying to murder the Duke in 1810. He holds a bloody razor, crying ‘Is this a razor that I see before me? Thou canst not say I did it,’ echoing the popular rumor that the Duke had murdered him.” 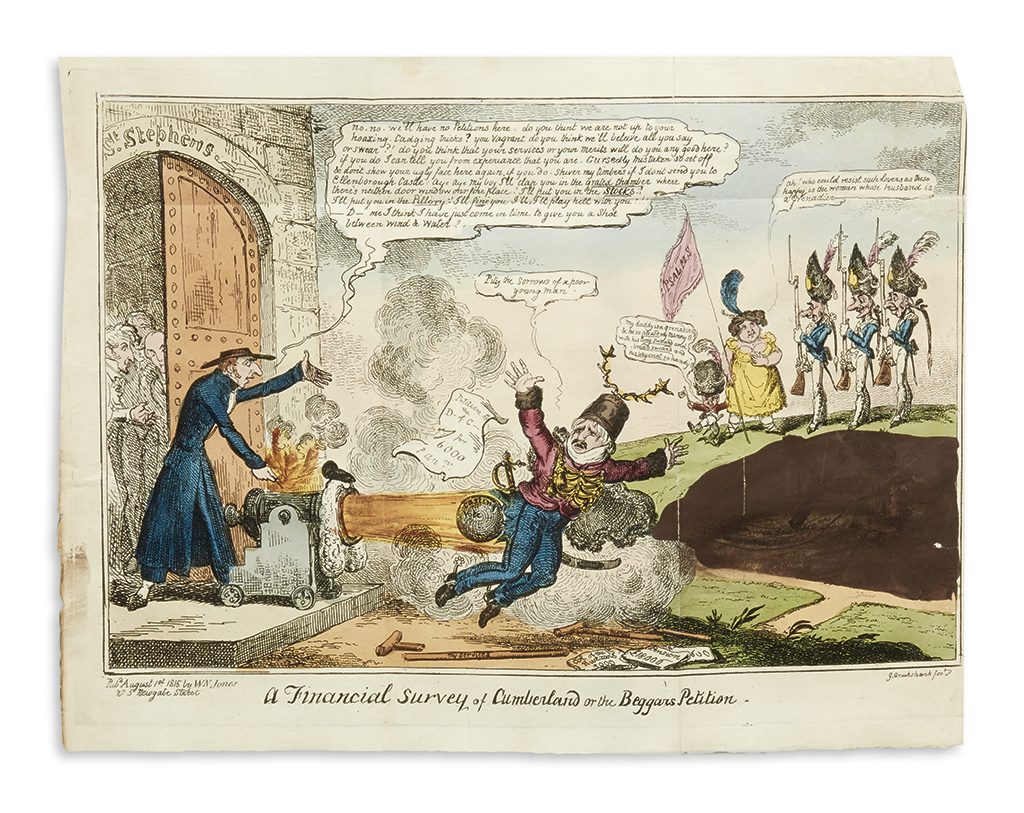 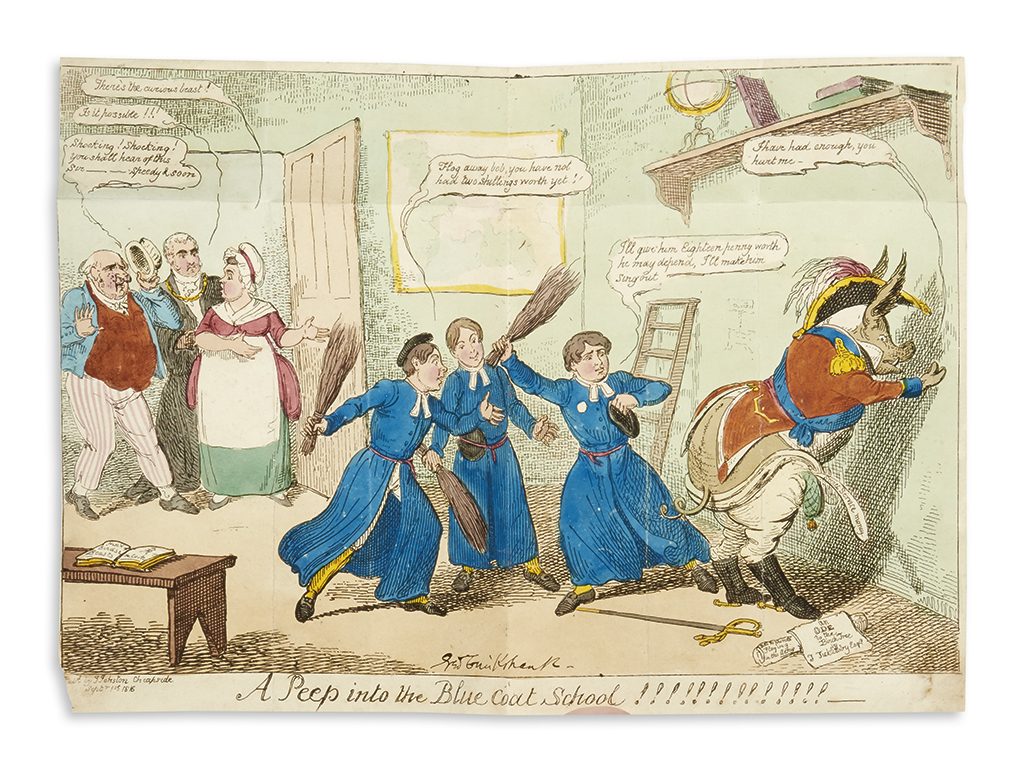 A Peep into the Blue Coat School!!!!!!!!!!!!!! satirizes a specific incident that occurred in November, 1815. According to a contemporary legal pamphlet, “On the 25th day of November [1815…], Lieut. Gen. Sire Eyre Coote had gone into the Mathematical School [of Christ’s Children’s Hospital] and conversed improperly with the boys,–asking them whether they liked flogging, and telling them they might flog him: and that for this extraordinary conduct, the Lieut. Gen. was taken by the Porter of the Lodge to the City Compter.”

Other accounts suggest a version of events that more closely resembled Cruikshank’s interpretation: that the interaction was more than conversational and when Coote was caught, his rear end was exposed and there were several boys behind him holding a whip.

The British Museum describes the image as such: “A scene in a bare schoolroom, with a map, &c., on the wall. A pig in military uniform, wearing a plumed cocked hat and a ribbon (incorrectly colored blue), stands on its hind-legs, its fore-feet resting against a wall, to be birched by three Christ’s Hospital boys, in their long blue gowns and yellow stockings. From his pocket hangs a purse labelled ‘Secret Service Money’. At his feet lie his sword and a document: ‘Bill to promote Floging in the Army . . . [C]oote.’ Against this lies: ‘An Ode to the Birch Tree by T Tickletoby Esqr’. He says: “I have had enough, you hurt me.” The boy who is flogging says: “I’ll give him Eighteen penny worth he may depend, I’ll make him sing out.” Another boy: “Flog away bob, you have not had two shillings worth yet!” On a form in the foreground lies a book: ‘Histy of Birds & Beasts—The Coote’, indicating that the pig is Sir Eyre Coote. A plainly dressed woman stands in the doorway with Sir W. Curtis and the Lord Mayor Wood in his gown. She says: “There’s the curious beast!” Curtis: “Shocking! Shocking! you shall hear of this Sir – – Speedy & soon.” Wood: “Is it possible!!”

In the end, Coote gave a gift of £1,000 to the hospital and was subsequently acquitted.

George Cruikshank’s younger brother Isaac is more commonly known by his middle name of Robert. Like his brother, Robert was a gifted artist and caricaturist. An unusual lot in our June 7 auction of Maps & Atlases, Natural History & Color Plate Books comprises 25 finished ink and watercolor drawings intended for publication as “juvenile dramas,” a popular children’s activity in the early nineteenth century. The images depict leading actors of the day dressed as their most famous characters, so that children could reenact the drama on their own. Five of the images included in the lot are accompanied by their published hand-colored engraved plates. 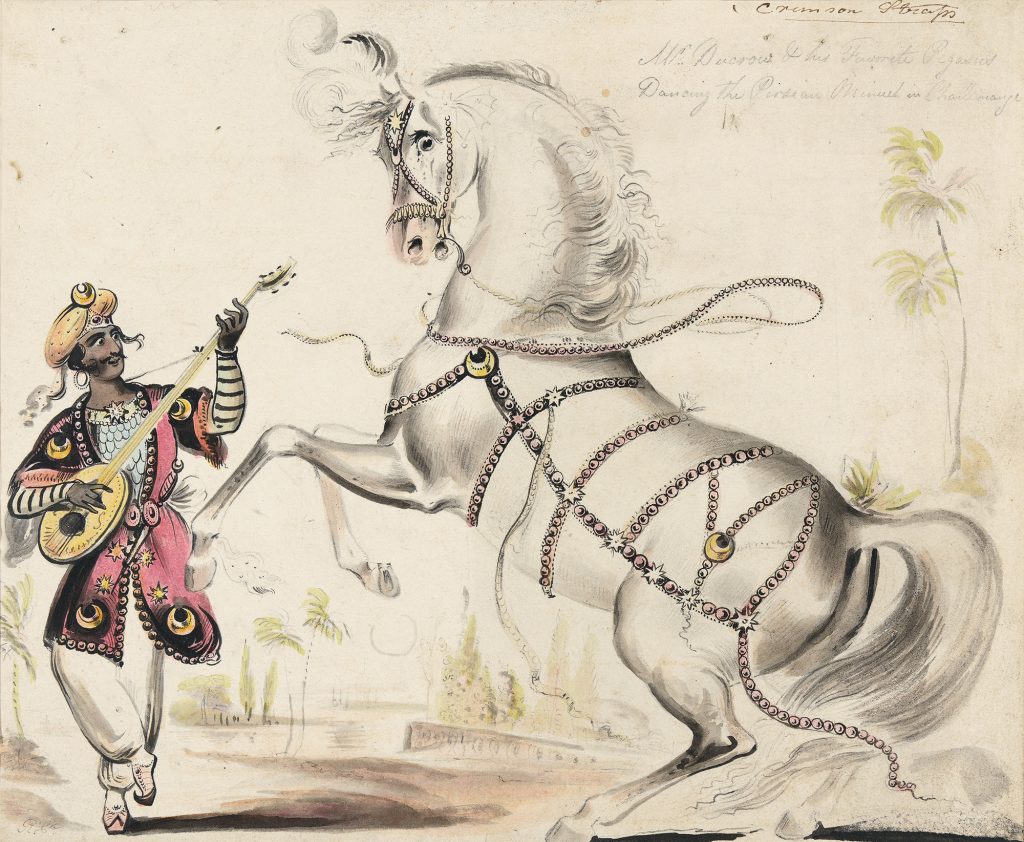 All similar in style, the drawings appear to have been created for the use of John Fairburn, a successful printer of theatrical scenes in the 1830s. Three of the present matching engravings were published by Fairburn, while two others bear the imprint of William Spencer Johnson, a publisher known to have issued later strikes of Fairburn’s plates. 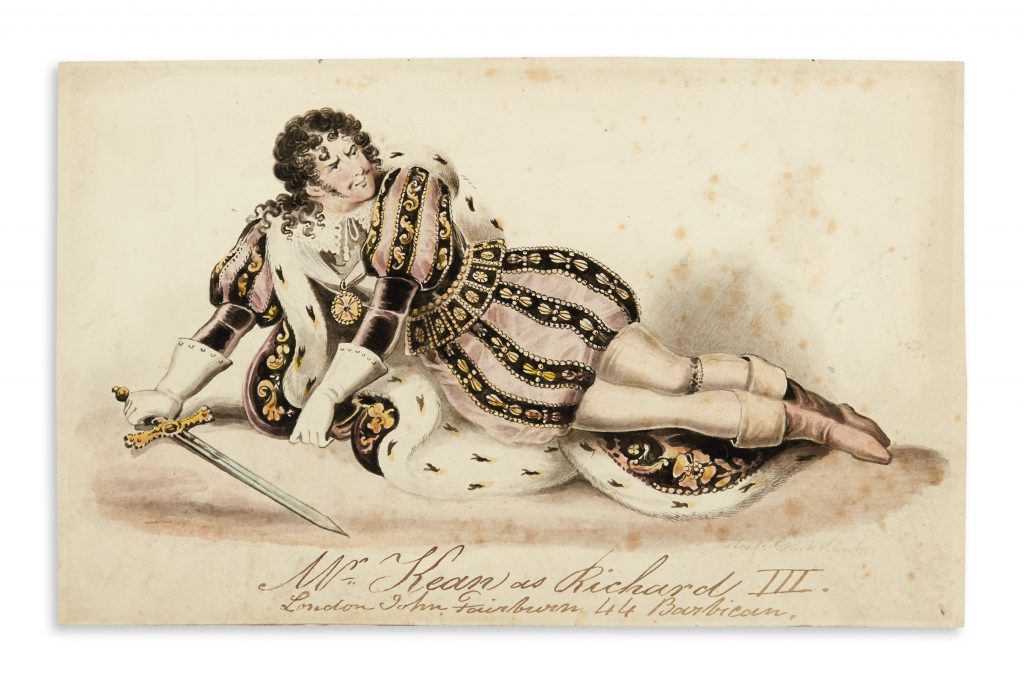 Toy Theater, also known as Paper Theater, was an established English child’s amusement since the early 1800s; however, popularity increased significantly when the talents of more accomplished artists such as the Cruikshanks became involved in creating the portraits. The present series of drawings by Robert Cruikshank are finely done, portraying almost identifiable likenesses of the thespians exuberantly engaged in the detailed costumes of their stage roles. Some of the notable portraits include: Mr. Farley as Grindoff in The Miller & His Men; Mr. Edwin as the Prince of China in The Bronze Horse; Mr. O. Smith as Mammon in The Devil’s Ducat; Miss Huddart as Joan of Arc; Miss Louisa Pyne as Don Juan; Mr. C. Hill as Saint Bernard in The Avenger; Miss Vincent as Prince Aladdin; and Miss H Lewis as Ann Jane Thornton, the Female Sailor. 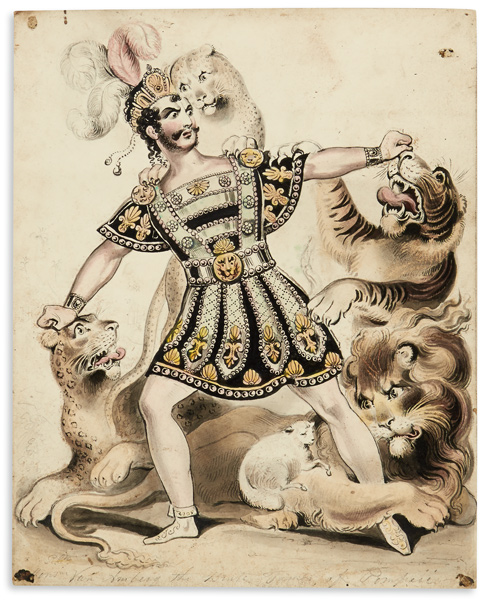 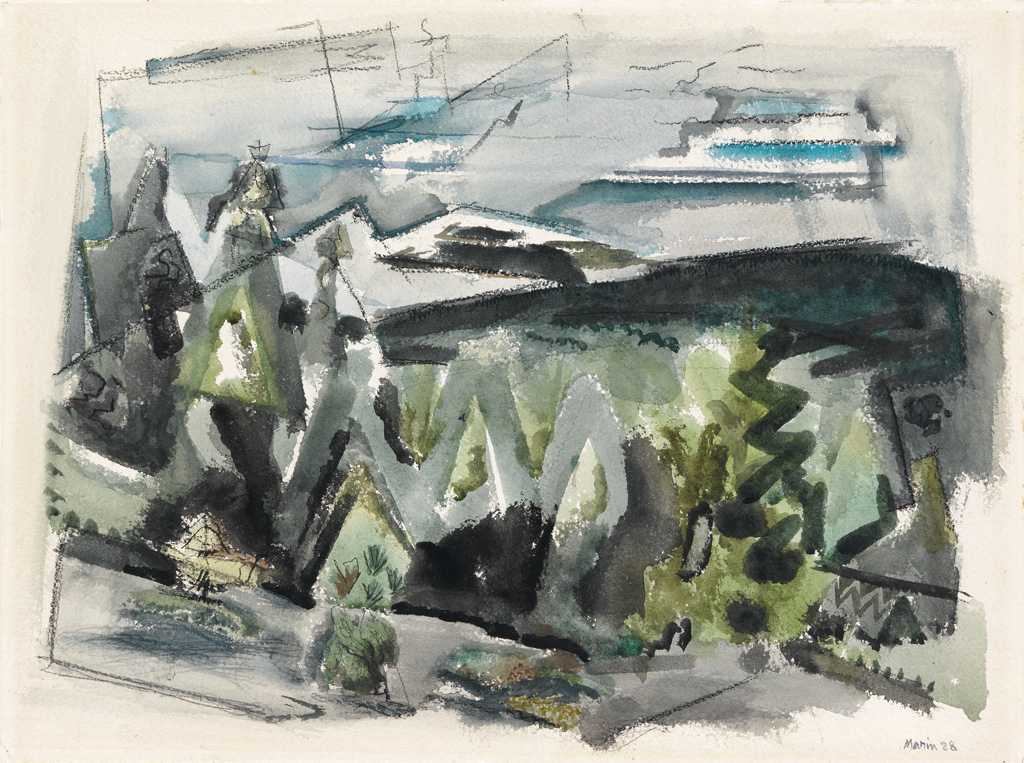 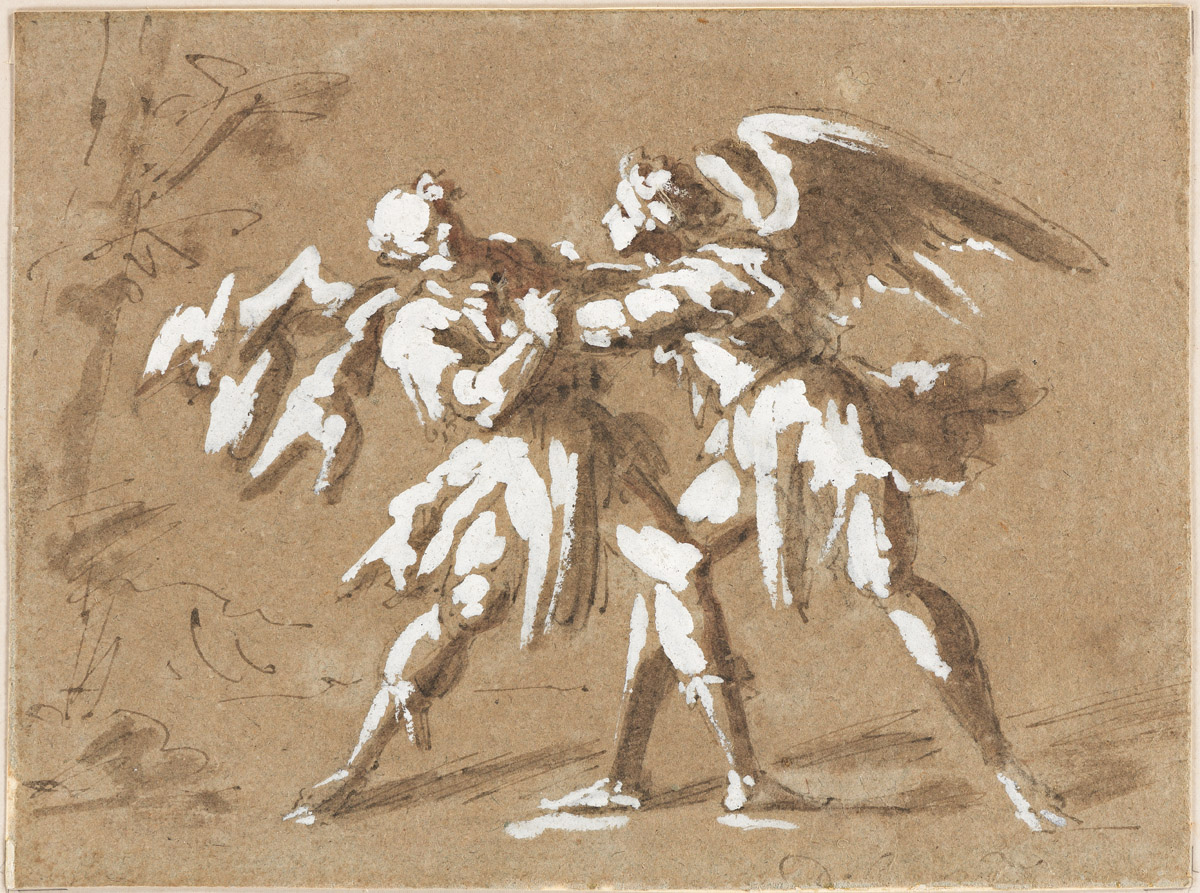