The community of East Hampton has long been known as an avant-garde artist enclave. Our May 11 auction of Contemporary Art features a century’s worth of output by artists who called the Hamptons their home.

Beginning in the nineteenth century with high-caliber artists such as Childe Hassam and Thomas Moran and his wife Mary Nimmo Moran, the East End was known for its tranquil light and inspirational environs. 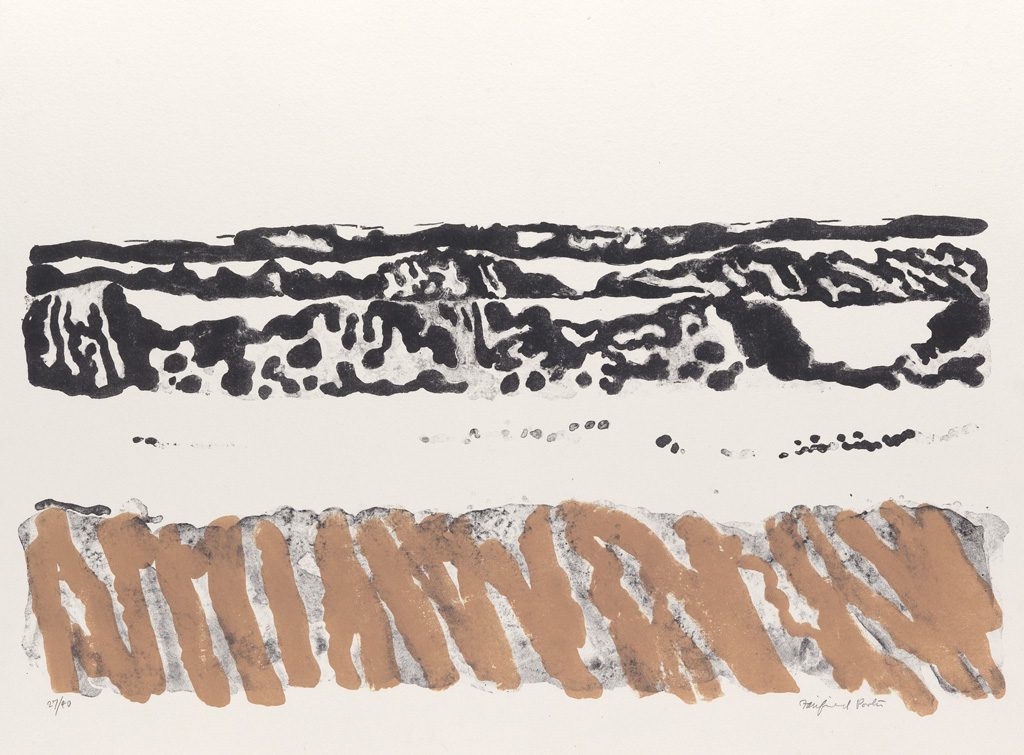 Fairfield Porter was an artist and critic who divided his time between Southampton and his family’s island in Maine. He was heavily influenced by Pierre Bonnard and Edouard Vuillard, a debt that is especially visible in Porter’s interior scenes. He remained dedicated to figurative art even as the Abstract Expressionist movement became de rigueur. One of Porter’s frequent muses was the landscape of the East End, and more than 200 of his works were bequeathed to the Parrish Art Museum after his death. 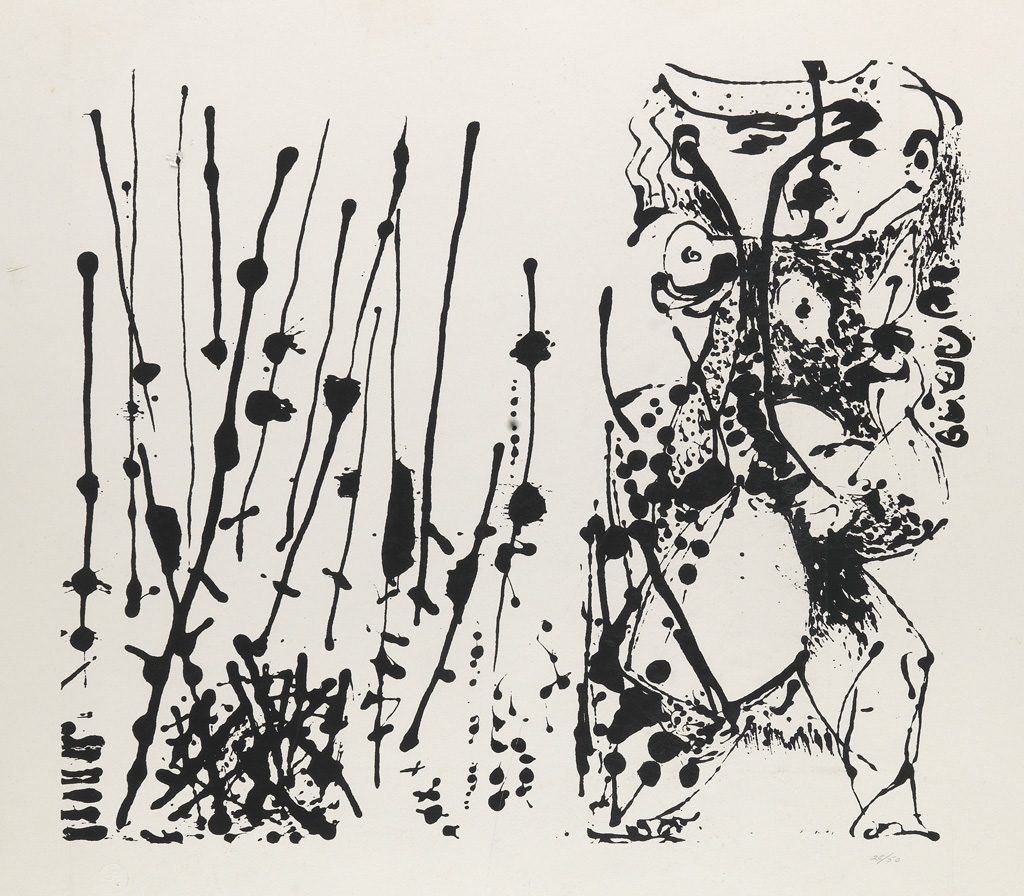 Perhaps the most famous East Hampton artist was Jackson Pollock. He lived with his wife, Lee Krasner, in a house and studio on Springs Fireplace Road that is now a museum.  Pollock and Krasner changed the face of American painting in the 1940s and ’50s when Pollock began his “drip paintings.” They were close friends with other creators in the region, including Alfonso Ossorio, and were largely influential in luring city artists out east.

According the the Museum of Modern Art, “One of the few Abstract Expressionists to work in printmaking at periods throughout his career, Pollock began making lithographs in the 1930s that were realist in style and largely influenced by his teacher, Thomas Hart Benton, the American Regionalist painter best known for his sprawling murals. He later moved to engravings, which show a subtle interaction between figuration and abstraction through an overall network of lines, and screenprints, in which he experimented with colored inks and papers.” 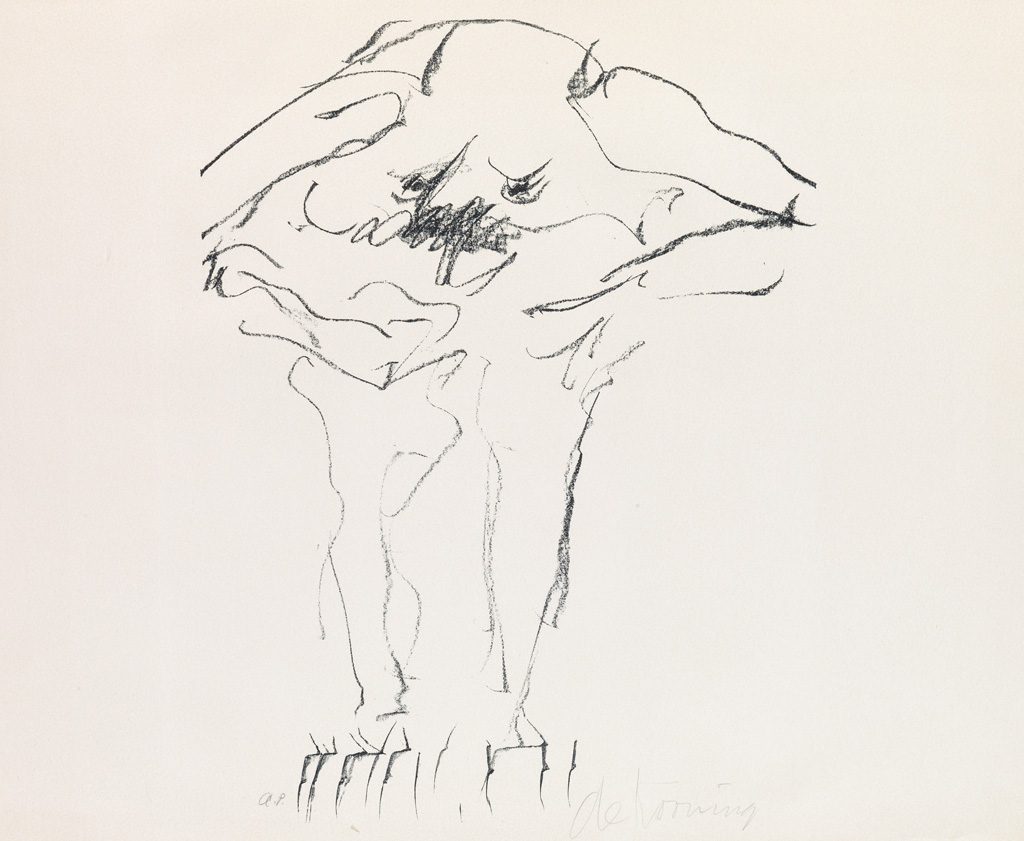 Willem de Kooning and his wife Elaine de Kooning moved to a studio in East Hampton in 1963. Over a career that spanned almost seven decades, he did some of his most famous and compelling work in the studio he designed and built in Springs. He was inspired by the light and ocean air that reminded him of his native Holland. De Kooning is best known for his gestural interpretations of women that have been so abstracted they begin to lose their form.

One of the pieces from the upcoming auction depicts a Clam Digger, one of the oldest activities recorded in East Hampton. An earlier painting of the same name was featured in de Kooning’s retrospective at MoMA in the section, “Starting Over in Springs.” 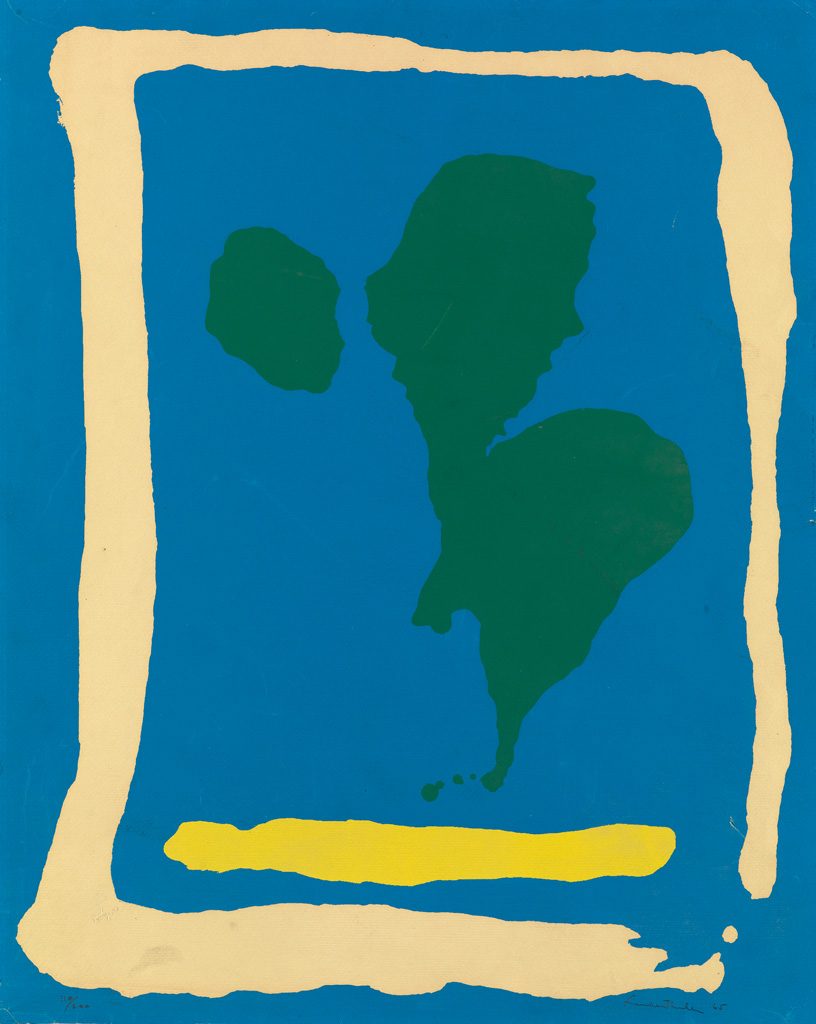 Husband-and-wife artistic powerhouse Helen Frankenthaler and Robert Motherwell moved to East Hampton in 1945, before Motherwell gained international renown for his monumental black and white abstractions. Frankenthaler was a pioneer of the “staining” movement and was deeply influential to the Color Field Painters in Washington, D.C., including Kenneth Noland. Though he is more famous for his bichromatic abstract compositions, Motherwell once said he “made his best work out there.” We have more information about works by Motherwell in this sale on our blog. 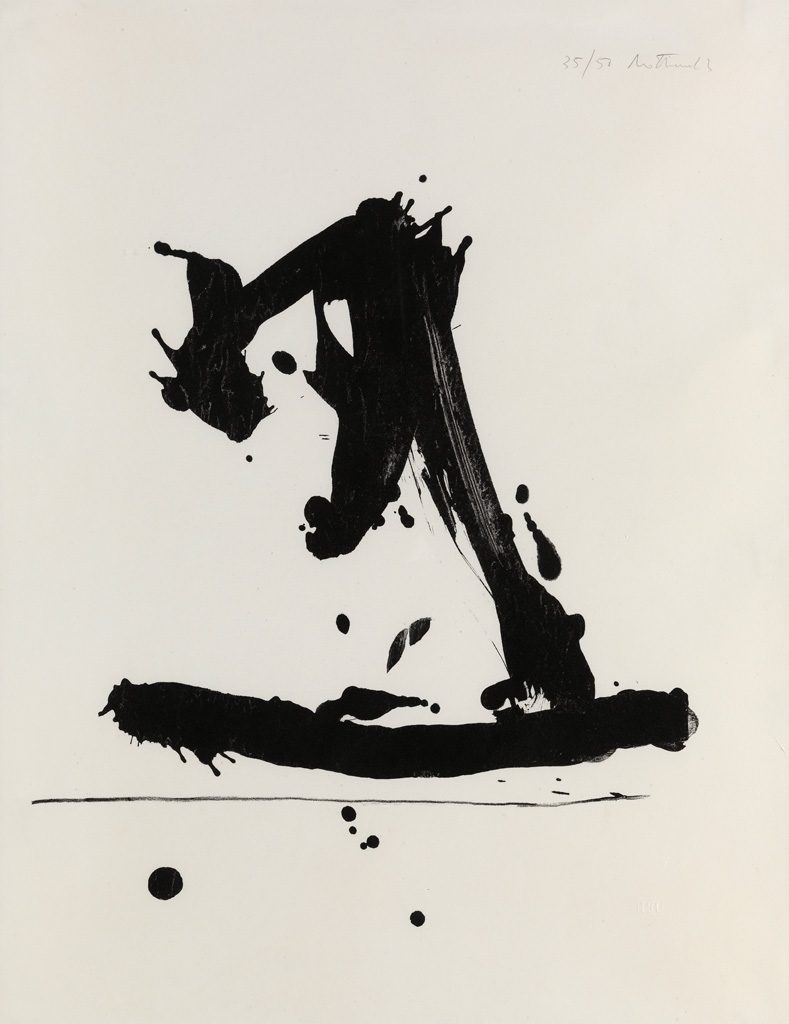 Unlike some of the other artists who found their stride in the Hamptons, Roy Lichtenstein moved to the East End in 1970 to escape his fame. Already, he had achieved critical and commercial success for his “dot” paintings that revolutionized Pop Art. According to a 1987 article from The New York Times, “The painter Larry Rivers, another friend of the artist, feels that Lichtenstein helped rescue modern art from the grip of the Abstract Expressionists and the emotive, gestural way of painting that had prevailed in the 1950s.” Upon moving to Southampton, his style loosened and he turned to seascapes, eschewing the rigid predictability of his famous Ben Day dots.

Lichtenstein created the promotional poster for a 1980 benefit at East Hampton’s Guild Hall, a museum that has celebrated East End artists since its foundation in 1931, which was recently described as “That eye-popping image, with a pair of gulls framed against puffy, marshmallowlike clouds while winging their way past creamy yellow dunes, still beautifully encapsulates all things East End.” 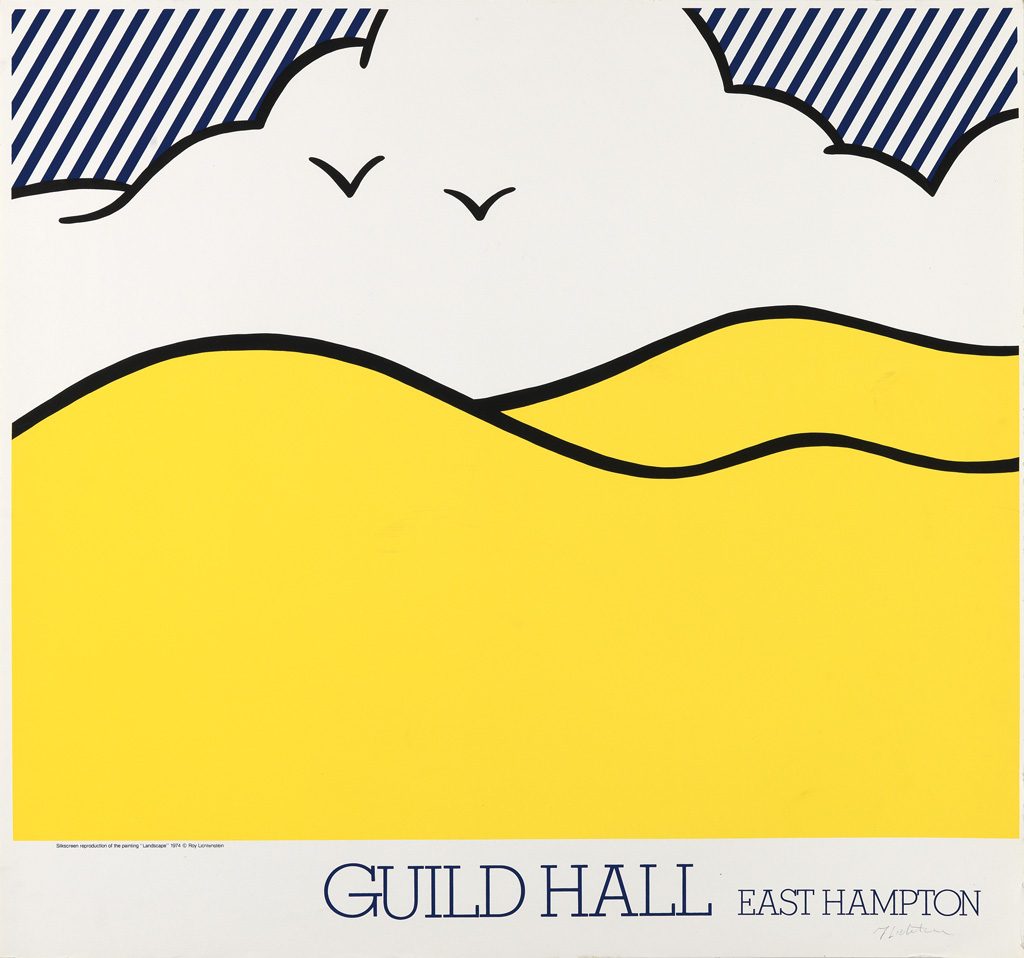 Contemporary artists continue to draw inspiration from the East End. Abstract realist Donald Sultan left the New York art scene in the ’80s to work in the relative peace and quiet of his Amagansett studio, where he focused on “the three main themes of painting: landscapes, still-lifes, and florals.” He is known for his larger-than-life interpretations of these subjects, often in jarring, non-representational colors. He also frequently employs unexpected materials and techniques in his work. 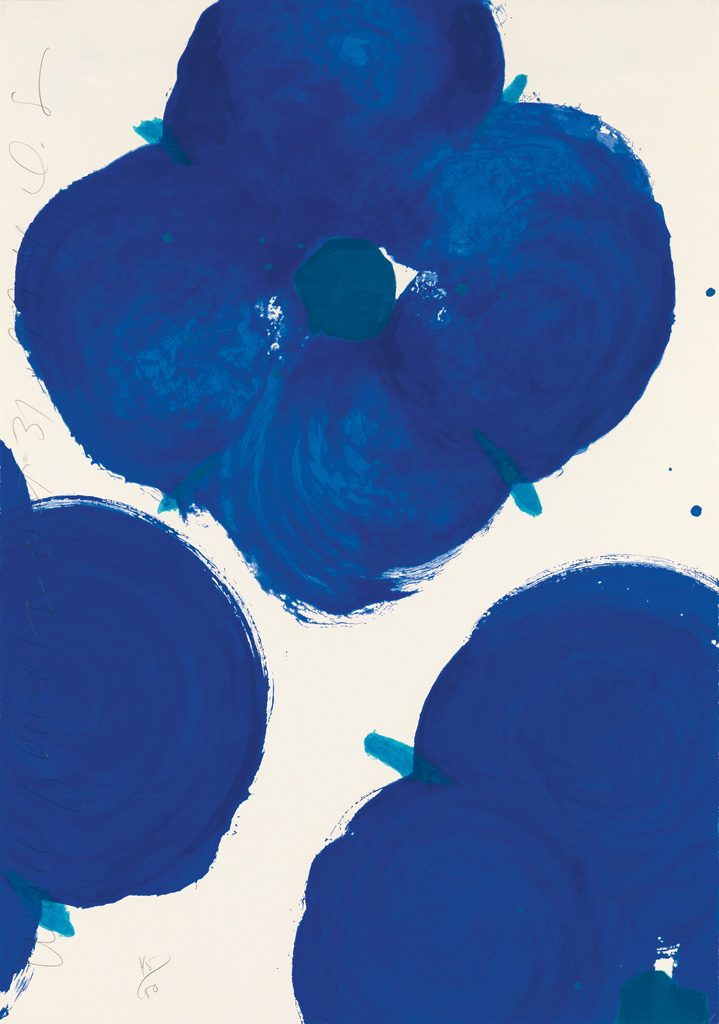 Eric Fischl‘s work from the 1980s is known for capturing a tense voyeuristic scene suspended in a breathless stillness, reminiscent of the domestic scenes of Edward Hopper. Inner Tube is an example of this motif, showing an adolescent boy obscured by sunlight watching a nude woman apply sunscreen in the shade. Fischl lives in East Hampton with his wife, April Gornik; each continuously draws inspiration from the landscape. 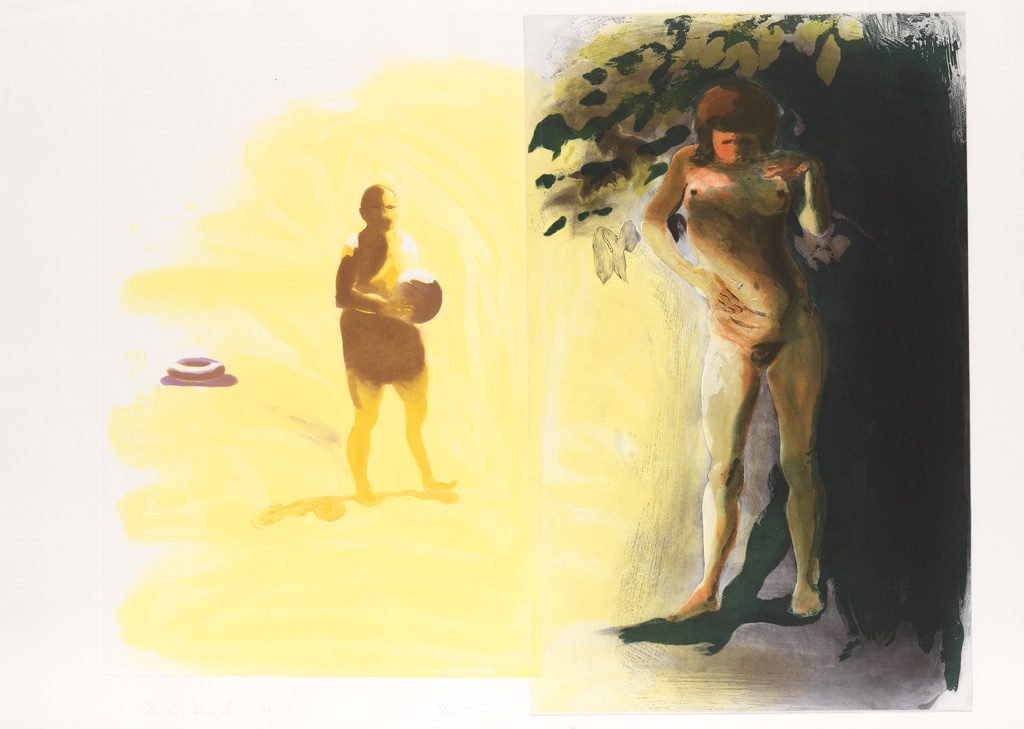 Jennifer Bartlett is a part-time resident of Amagansett and Brooklyn whose work is recognizable by a varied scale of grids that encompass her works. In some pieces, such as 3 p.m. Chair (Black & White), the grid is minuscule and obfuscates the subject matter; in contrast, the grid in In the Garden #8 is so large it breaks the image into just two planes. The long reflecting pool with a figure at the end is a frequent theme of her work. 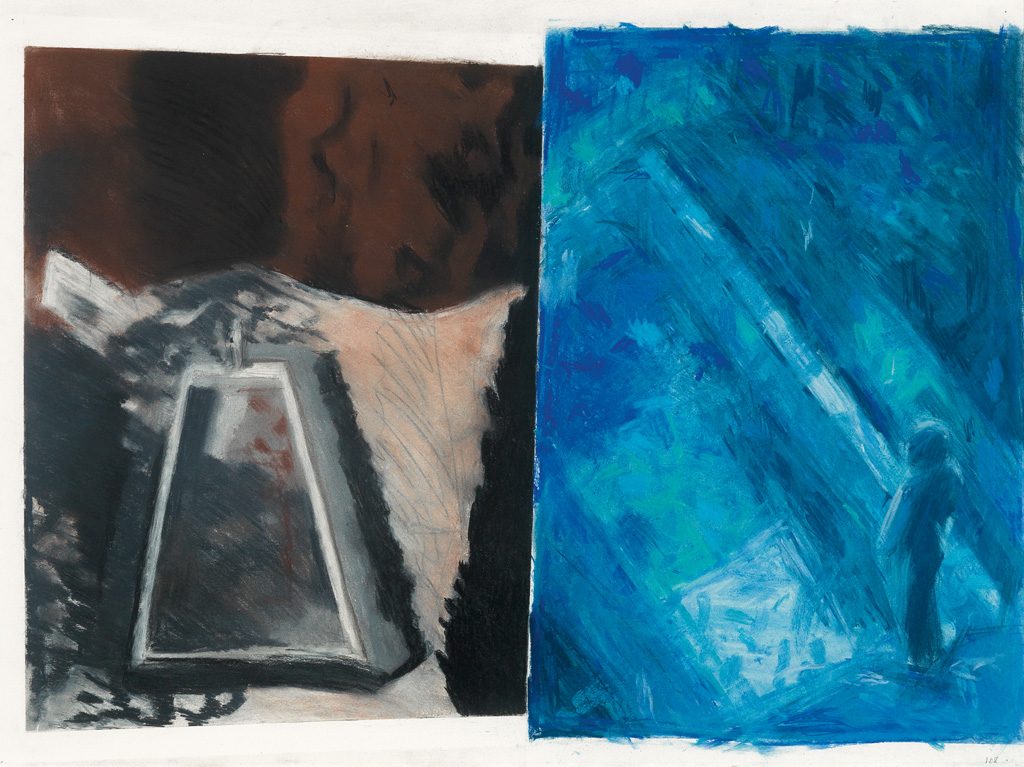 East Hampton is one of America’s most enduring artist communities, and will surely continue to inspire new movements and generations of creative geniuses.

Find more works by these artists and others in the catalogue. 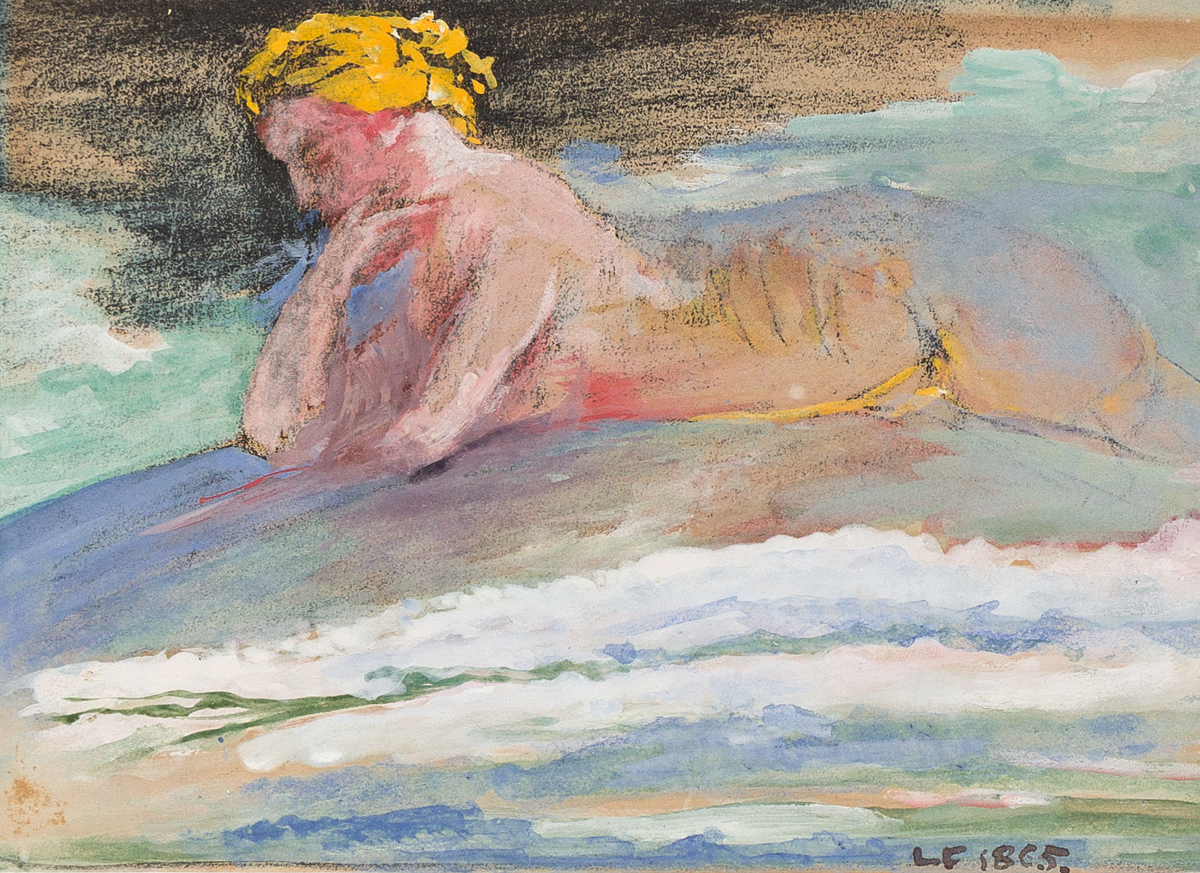 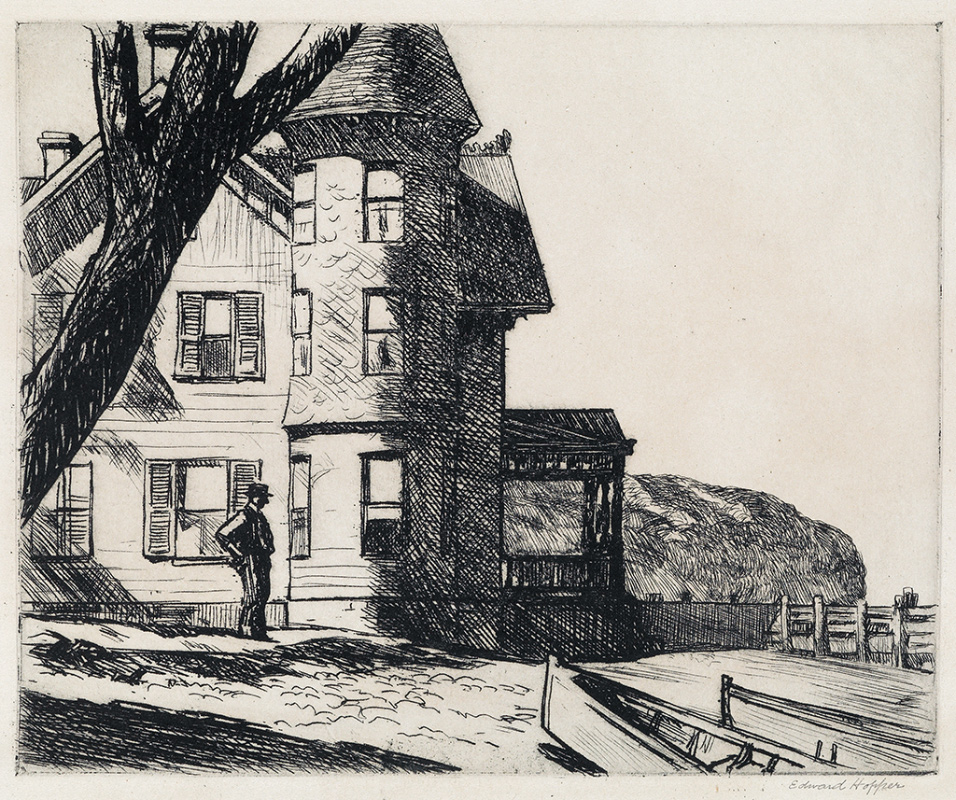