As autumn approaches, we come to appreciate the feeling of liberation that summer brought us. Travel has always been synonymous with summer, especially for those of us wishing to escape the stifling heat of the city. Each summer, tourists, artists among them, flocked to Northeastern coastal havens to cure their urban fatigue, become closer with nature, and enjoy the slower pace for the season.

Our September 17, 2020 sale of American Art features a beautiful selection of works by artists working in these coastal havens. Here we discuss the paintings and drawings on offer and the destinations that served as inspiration for the artists who made them.

By the turn of the century, Grand Manan Island, located in Canada’s Bay of Fundy, had become a tourist destination for those seeking the tranquility of a laid back fishing village. The island’s rugged cliffs and grand landscape drew Hudson River School artists like Alfred Thompson Bricher and Frederic Church. John James Audubon visited the island to record its flourishing wildlife and Winslow Homer, who also summered on Long Island, enjoyed painting the romantic landscape.

The expansion of the Long Island Railroad in the mid-nineteenth century brought a burgeoning summer tourism industry. This influx reached its height in the 1870s and 1880s, just as whaling, which propelled the East End economy through much of the 1800s, had all but died out. William St. John Harper, active in East Hampton, depicted its stations in his numerous sketches.

Many prominent American artists also landed on Long Island by invitation and visiting became a summer tradition and eventually a long-term residency. After visiting friends in 1878, Thomas Moran became enamored with Long Island’s rustic landscapes, and Moran built a house in East Hampton in 1884. William Merritt Chase was asked to open up a summer painting school by patron Janet “Nettie” Chase Hoyt (daughter of prominent senator and one-time presidential nominee Salmon Chase and wife of New York real estate mogul William Hoyt—also her brother-in-law’s cousin) to cater to the vacationers who wished to paint the famous Long Island landscape en plein air. Nettie, an illustrator in her own right, was able to garner the sponsorship of Samuel L. Parrish, whose collection would form the Parrish Museum.

The Hoyts designed an “Art Village” around the Shinnecock Summer School of Art in 1890. The first eight small cottages were completed in 1892 in time for the summer students. The majority of the school’s student body were young women staying at local resorts, though Chase also taught prominent artists in Shinnecock Hills such as Joseph Stella and Rockwell Kent. The school closed in 1902 when Chase left to travel to Europe, eventually buying a home in Venice in 1907.

Later in the 1930s, Chase’s student Guy Pene du Bois would teach art classes in Amagansett. Childe Hassam and his wife, Maud were invited by an artist friend to East Hampton in the summer of 1898. By that time, East Hampton was already an established artist colony and resort area with sporting and social clubs. Hassam painted the modern society and environment in East Hampton instead of nostalgic scenes of the previous generation. The Hassams visited frequently and bought a small house in East Hampton in 1919 where Childe would remain until his death. In the Post-Modern era, the East End would be home to artists Fairfield Porter, Lee Krasner, Jackson Pollock, Willem and Elaine De Kooning, John Ferren, and Alphonse Ossorio.

The Hamptons was not the only summer destination for artists on Long Island. William and Edith Glackens started renting a beach house in Bellport in the early 1900s. On the shore of the Great South Bay, Glackens was able to experiment with jewel-like colors reminiscent of Pierre-Auguste Renoir. Bellport and nearby Blue Point had none of the great estates like the Hamptons and Glackens painted a more working-class summer scene on Long Island with wooden gazebos, makeshift water slides, and jetties. Oscar Bluemner’s sketching trips through Long Island and New Jersey likewise did not represent the likes of the bourgeois class.

The Catskill Mountain House was at the forefront of tourism in the United States. Built in 1824 on the precipice of a steep cliff in the Catskill Mountains, its majestic view made it one of the nation’s most popular tourist attractions in the mid- to late-nineteenth century. Swann’s Printed & Manuscript Americana sale on September 24, 2020 features an original guest register from the Mountain House. Among the guests were notable politicians and writers, including Henry Longfellow, who arrived with his wife and close friend Charles Sumner in August 1843. The Mountain House played a role in the development of the artists of the Hudson River School; several came to take in the majestic views. Thomas Cole was a regular visitor. He might well be the “Cole” of New York who appears second in the entire volume on May 20, 1839. He was certainly the T. Cole who shared a room with the poet William Cullen Bryant on July 26, 1839, and June 25, 1840; the two were good friends. Cole returned on June 26, 1841, and July 25, 1843, signing his own name on that final visit. Among the other art figures spotted are Hudson River School painters John W. Casilear and Frederick Edwin Church, who signed his name, as well as engraver James Smillie and painter William Sidney Mount, who also signed. Furniture-maker Duncan Phyfe visited on September 8, 1846. A Philadelphia calligrapher named Benjamin Eakins and his wife visited on August 19, 1846; they likely brought their two-year-old son Thomas, who went on to a noted art career himself.

Cape Cod also served as a point of refuge and inspiration for artists. Provincetown, home to the Cape Cod School of Art, became synonymous with the revival of the color woodblock print. The Provincetown Printers Group assembled in 1915 and developed the “white line” style woodcut. Characteristically, these prints of still lifes and New England town and landscapes are made up of swaths of color and geometric shapes separated by lines of un-inked exposed paper.

Blanche Lazzell, considered to be the master of the technique, continued in this style of using multiple layers of solid colored forms in her original works inspired by New England landscapes. George Grosz, who had immigrated to the U.S. just before World War II, also found his muse in Cape Cod scenery. He traveled there during the summers from 1936 to 1945 where he made numerous watercolor landscape studies. In his autobiography, he recalled that making the watercolors he, “Would roam for hours through the dunes at Cape Cod and try humbly—omitting nothing and adding nothing—to record my feelings with what modest gifts I possessed.” Later Robert Bliss would paint bathers in Provincetown in his simplistic figural style.

Related Reading: A Brief History of the Color Woodcut and White Line: Blanche Lazzell and the Provincetown Printers

Farther north, the Isle of Shoals off the coast of Maine at the Appledore Hotel was a retreat for many important artists and writers at the time, including Hunt, Nathanial Hawthorne, Ralph Waldo Emerson, Childe Hassam, and John Appleton Brown. Their host was Celia Thaxter (1835-1894), the American poet and author, who was born in Portsmouth, New Hampshire, ten miles west of the islands, and whose father (who became the lighthouse keeper on White Island in the Isles of Shoals) built the Appledore. The serene landscape on the island was of tremendous appeal to the artists who spent time there during summer months.

Hassam’s Sailboat off the Coast, Isle of Shoals, watercolor, 1894 (lot 20), represents a sailboat idling off the Appledore coast at sunset and A Shady Spot, watercolor, 1892, is the view from the hotel’s flower-covered porch. Brown’s work depicts Thaxter’s garden, whose vivid floral displays inspired many of the artists who visited, which she immortalized in the volume An Island Garden, 1894 (illustrated by Hassam).

The Ogunquit art colony, based in an old ship-building village in southern Maine, also offered abundant natural beauty. Though housed in primitive, ramshackle structures at the turn of the century, artists attending summer art classes there transformed the area into a true art colony and a lively social destination in a span of only a few decades. William Zorach and Bernard Karfiol drew from the simplicity of this seaside village. Artists Peggy Bacon, Will Barnet, Charles Burchfield, and Marsden Hartley were also noted artists in residence.

Do you have a work by an American artist we should take a look at? 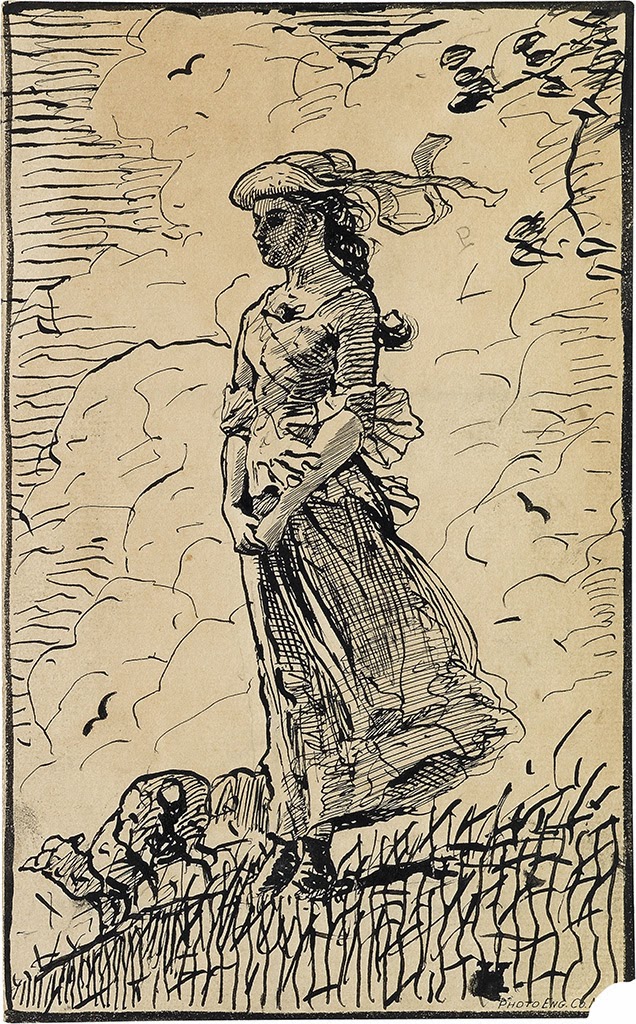