Collectors on Collecting: The Feminist Collection of Harriet Lyons

Harriet Lyons was a founding editor of Ms. Magazine, a journalist, and an art collector. In 1971, she wrote a cover story for the Village Voice about women’s sexuality in art at a time when women were starting to challenge male definitions of art. A leading figure in the feminist movement, she supported artists through her writing, personal art collection, and activism, which included being a member of the Board of Advisors to the New York Feminist Art Institute, alongside Alice Neel, which launched in 1979.

Here, in her own words, Harriet Lyons discusses her collecting practice and some of the works on offer in our June 10, 2021 sale of Contemporary Art.

In 1970, my one and only woman artist friend, Jane Kaufman, invited me to join a feminist consciousness-raising (CR) group. Not surprisingly, the members were mostly artists, plus a couple of curators and an art historian. Some, like Pat Steir and Joan Snyder, would go on to receive major exhibitions and sales; others like Jane, recognized as a pattern and decoration artist, would become a Guerilla Girls protestor, shaking up the art world with compelling demonstrations and posters. Whitney Museum curator and artist Elke Solomon would go on to co-found the provocative Heresies publication; sculptor Nancy Azara would co-found the New York Feminist Art Institute. And Whitney curator Marcia Tucker would open the New Museum.

I landed as a general assignment editor on the original staff of Ms. Magazine, and also as its co-editor of visual art coverage—the first for a mainstream women’s magazine. I admired my CR sisters’ aesthetics and activism and appreciated the excellent art education I received from them. Over the decades, many artists became good friends, and I began collecting their work.

In 1974, my CR group was buzzing with talk of members Marcia Tucker and Elke Solomon’s curatorial involvement in the Whitney Museum’s Alice Neel retrospective. At 74, Neel was receiving her first major museum exhibition, although her fellow artists had long acknowledged her brilliance as a portrait painter. Realizing her story had to be told, I assigned a profile of her for Ms. Magazine.

I accompanied the photographer who was to photograph Neel for the article. Alice lived and worked in a spacious apartment on West 107th Street and Broadway in Manhattan. She flitted about and talked non-stop; she was outrageous and adorable. I visited her again to obtain examples of her work for the article, and we enjoyed each other’s company. After the Whitney exhibit closed, she told me she wanted to paint my portrait. I was floored, and beyond flattered. I wanted to own this work but I could not afford a painting. We worked out a price for a drawing instead.

Sitting for Alice was a trip. First, she unnerved me slightly by telling me I was her first subject after a three-month hiatus that she gave herself to relish the exhibit. She then said she didn’t know if she could draw! She kept up a patter of life experiences while probing for the inner me. She was psychologically astute and had already earned the label “painter of souls.”

I was exhausted after the four days it took for her to be satisfied with the work. I was also thrilled to take it home.

As something of a mover and shaker in the feminist art movement, I had several encounters with Mimi (as we called her). Initially, there was coverage in Ms. of her collaboration with Judy Chicago to establish the Feminist Art Program at the California Institute of the Arts and the creation of “Womanhouse” in downtown Los Angeles, in which women transformed rooms based on their lives. In the mid-70s, I joined her and sculptor Nancy Azara in discussions that led to the opening of the New York Feminist Art Institute. In 1977, I interviewed Mimi for Ms., where she declared, “Women’s art is the only goddamn energy around.”

Along the way, I bought a work made up of hand-embroidered hankies and doilies, which Mimi gathered from audiences as she traveled the country giving lectures. She assembled these souvenirs, as she called them, into collage paintings which she renamed femmage.

Talk about an impulse buy! I acquired the poster, Red Flag, through my CR group in 1971, when I most identified with radical feminism. I thought I could live with such a powerful (yet maligned) image of femaleness, but it promptly went into a closet. It recently surfaced in a long-overdue closet purge. I did find Chicago’s subsequent Dinner Party exhibit, with its vaginal imagery, awesome.

Doug Ohlson is the man of my collection. In the early 1960s, my friend Jane Kaufman married him, and I married Alfie Lyons. We bonded as couples with Alfie, a born and bred Dubliner, regaling us with hilarious tales of the old sod. Alfie and I visited Doug at his loft in a former, mostly vacant industrial building in SoHo. Doug endured the lack of electricity and heat, happy to have the space to make art. We bought three of his early paintings, as well as a suite of three silkscreens depicting the geometric shapes and vibrant color that would come to dominate a highly praised body of work. 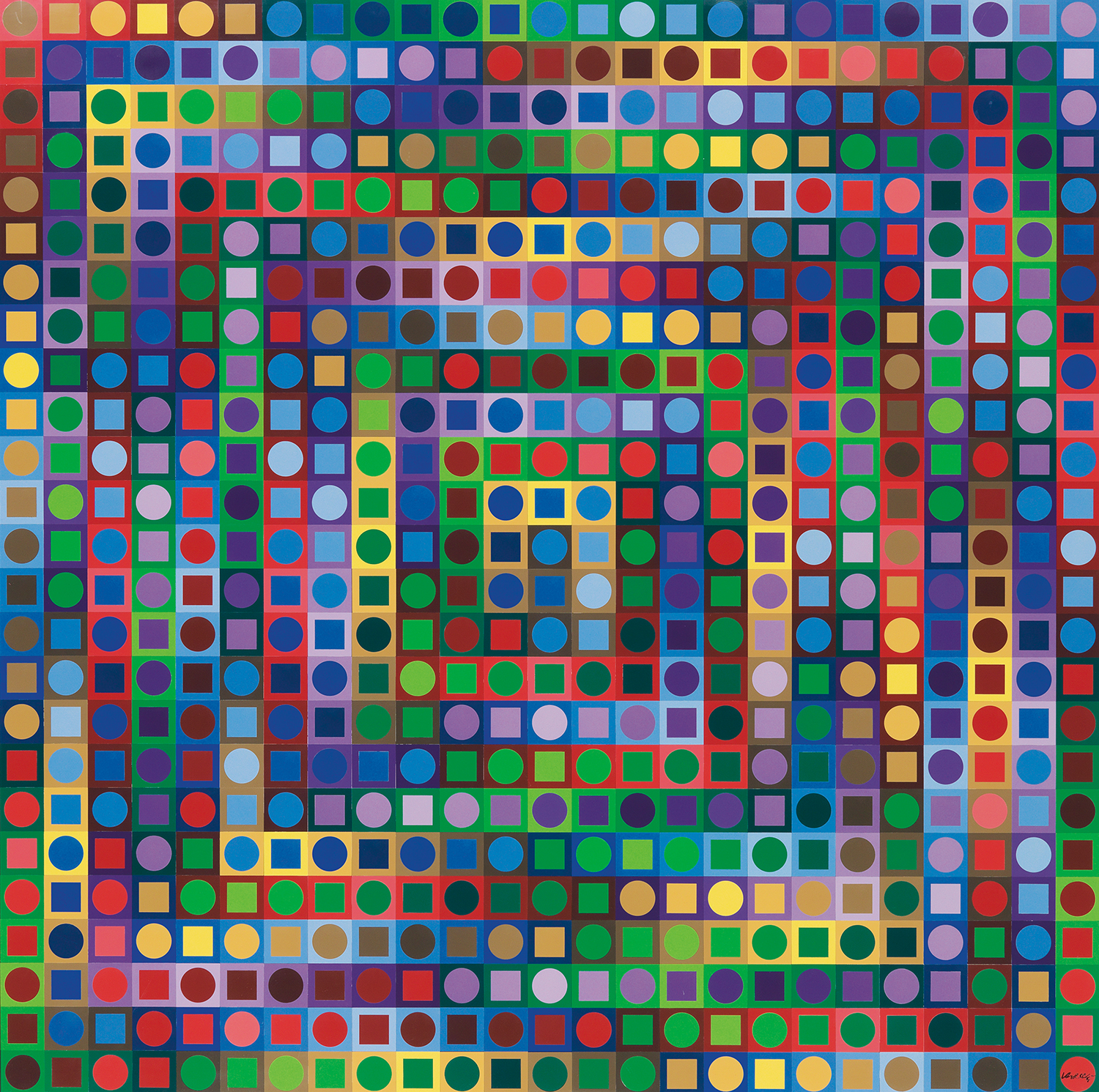