Festschrifts, usually academic in nature, can also be jovial. An exceptional example, coming to auction in our December 14 sale of Illustration Art, features contributions from some of the greatest cartoonists of the early twentieth century, in their recognizable styles.

The volume was presented in 1911 to the American cartoonist and humor writer, editor and radio personality, Harry Hershfield. He was well known for his popular radio shows, including “Stop Me If You’ve Heard This One” and “Can You Top This?” and for producing his own acclaimed comic strips Desperate Desmond and Abie the Agent. The cartoonists whose work fills the book were primarily employed by William Randolph Hearst’s The New York Journal. 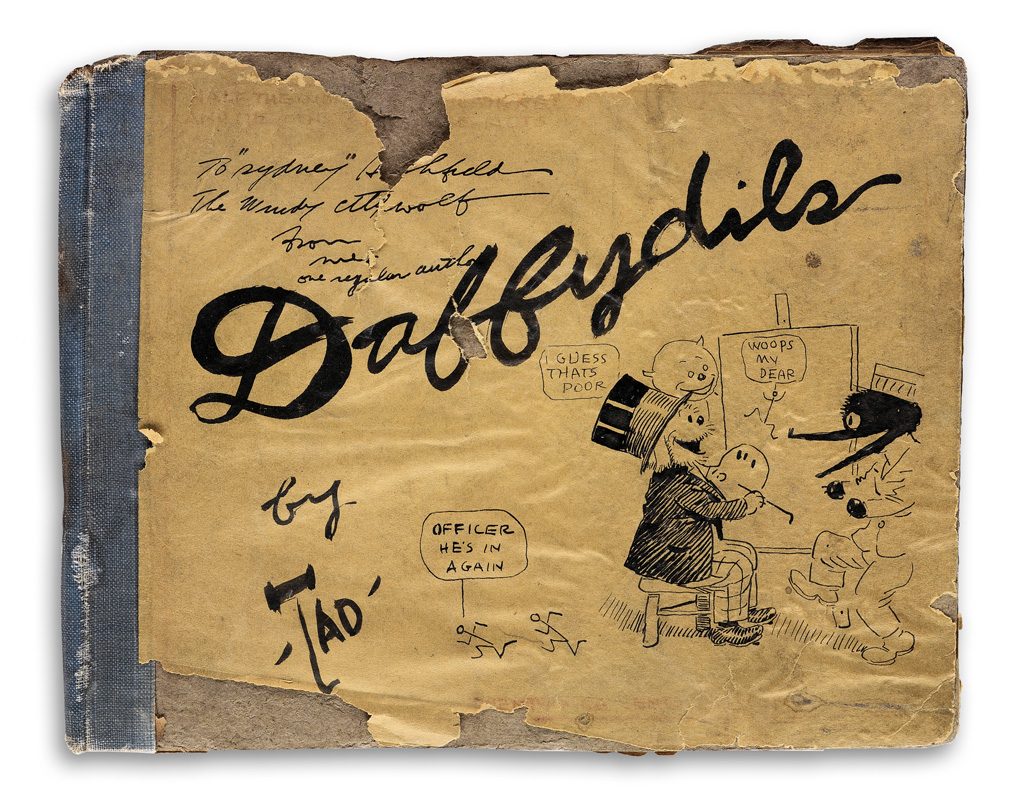 Lot 250: Daffydils, festschrift for Harry Hershfield, with cartoons by 18 contemporary artists including George Herriman and Winsor McCay, 1911. Estimate $5,000 to $7,500.

The cover was designed by veteran cartoonist Tad Dorgan, a social satirist and regular contributor to Hearst’s newspapers. The title, Daffydils, comes from his popular humor column. He was known primarily for his sports writing and cartoons following the activities of various dogs, most famously a fluffy white dog named Judge Rummy. Through his regular columns and cartoons, Dorgan coined numerous phrases still in use today, including “the cat’s meow,” “dumbbell” and “for crying out loud.” It’s not clear why he dropped the second l from the title of the festschrift. 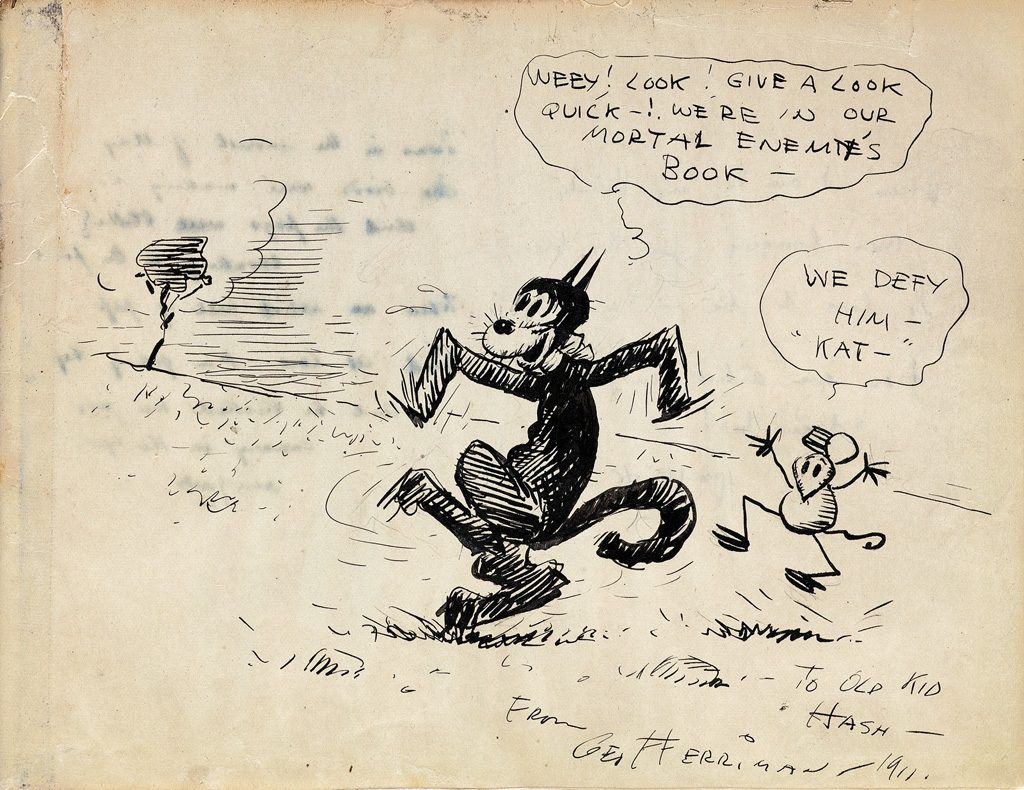 The first page of the book was signed by George Herriman, who included depictions of his most famous creations, Krazy Kat and the mouse Ignatz. The characters break the third wall by referring to their presence in a book intended for a rival cartoonist, but Herriman inscribed the drawing “To Old Kid Hash,” a nickname for Hershfield. 1911 was the same year Krazy Kat and Ignatz earned a weekly place in The New York Journal. Though his work was vastly influential during his lifetime, it was not until 25 years after Herriman’s death in 1944 that his birth certificate was discovered to list him as “colored,” revitalizing interest in his oeuvre.

From The New York Times‘s review of Michael Tisserand’s book, Krazy: George Herriman, A Life in Black and White:

[Charles] Schulz got turned on to “Krazy Kat” right after World War II, he said, and it “did much to inspire me to create a feature that went beyond the mere actions of ordinary children.” Theodor Geisel (Dr. Seuss), whose animal characters strongly resemble Herriman’s, told a biographer, “At its best, the comic strip is an art form of such terrific wumpf! that I’d much rather spend any evening of any week rereading the beautifully insane sanities of George Herriman’s Krazy Kat than to sit myself down in some opera house to hear some smiling Irish tenor murdering Pagliacci.” The iconoclastic Robert Crumb called Herriman the “Leonardo da Vinci of comics,” while the ambitious [Art] Spiegelman argued that Krazy Kat “crossed all kinds of boundaries, between high and low, between vulgar and genteel.” 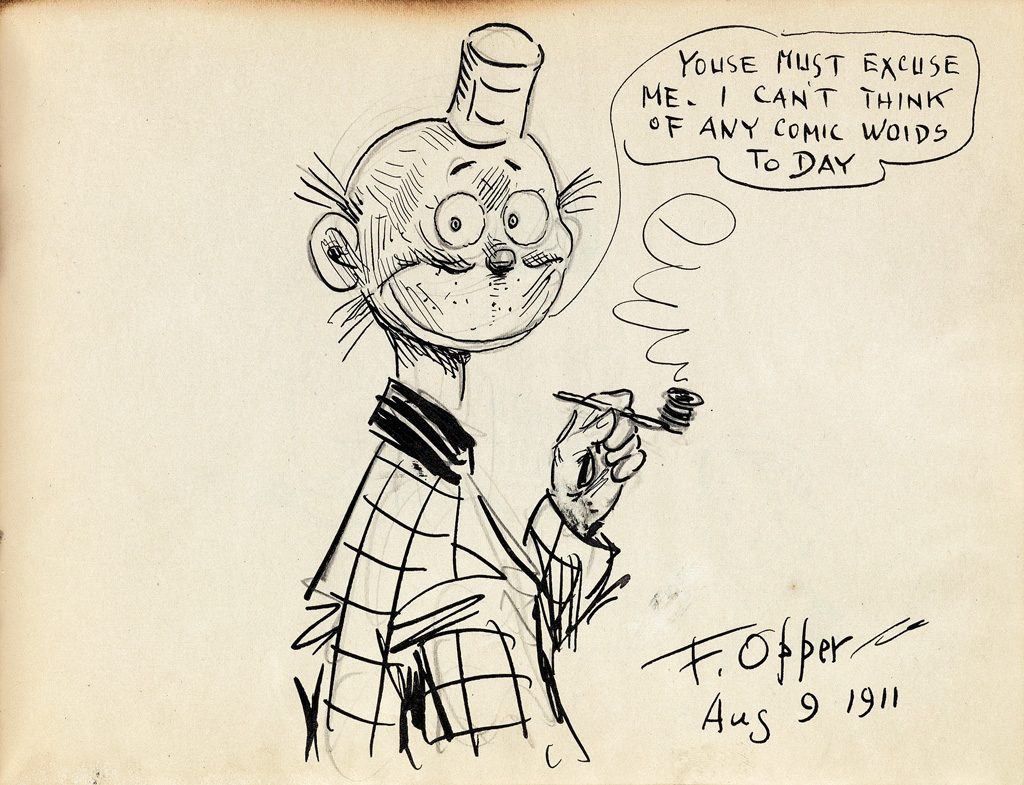 Comic pioneer Frederick Burr Opper contributed to the festschrift with a sketch of his most famous character, Happy Hooligan. Happy premiered in The New York Journal  in 1900. 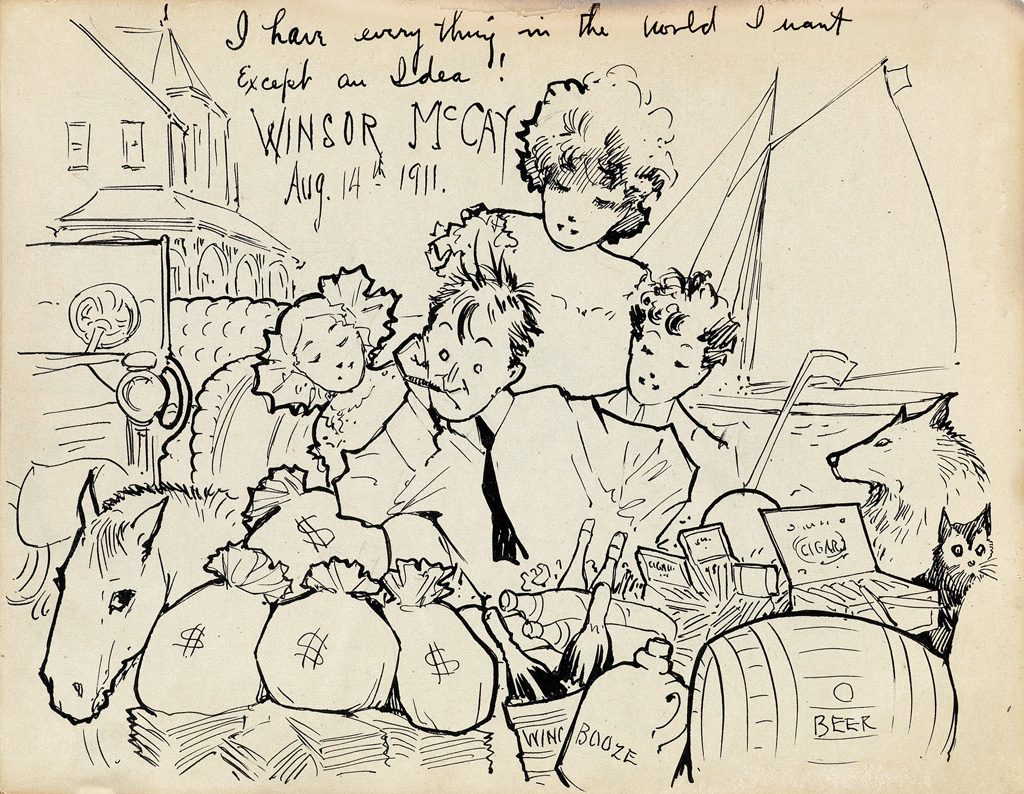 Winsor McCay stands out here for his meticulous Art Nouveau style. McCay’s most famous character was a young boy named Little Nemo, whose fantastical dreams took him on a new adventure in each strip. For Hershfield, McCay illustrated the cartoonist’s daily plight: “I have everything in the world I want except for an Idea!!”

Browse the full catalogue for more. 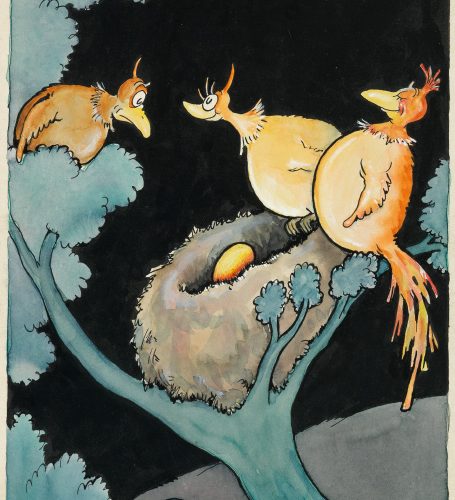