Sheila’s blog, The Hot Bid showcases intriguing and delightful lots coming up at auction. She is an experienced writer and editor who specializes in luxury, travel, art, antiques, collectibles, food, medicine, history, design and interiors. She also keeps a portfolio on MediaBistro.

Let’s start by discussing who Charles Addams was, and why we’re still talking about his work today.

First, I think we can all agree that Addams’s style was like no other. No one else married gloom, death, and danger with humor, often tempered with tenderness and charm, like he did. He could break down humanity to its basest nature. The New Yorker writer and critic Wolcott Gibbs once described his work as “essentially a denial of all spiritual and physical evolution in the human race.” Ask any cartoonist who their main influence was, and they’ll surely name him.

How prolific was he?

His output was astounding. He submitted his first work to The New Yorker when he was 21 and continued until his death [in 1988, at the age of 76]. He worked for over 60 years and produced thousands of cartoons and 15 anthologies, which have been translated into numerous languages.

Where is most of Addams’s original artwork now?

A large portion resides at the Tee & Charles Addams Foundation in Sagaponack, New York. Tee [Addams’s widow] gave a large portion to the New York Public Library. For many years, they had a dedicated rotating gallery for those works.

Where was Addams in his career in 1973, when this was published?

He was 61, and still working for The New Yorker.

How did this Addams Poe cartoon come about? I understand the joke was not Charles Addams’s idea—someone else came up with it, and he was asked to illustrate it?

Nevermore was, in fact, the first idea that cartoonist Jack Ziegler sold to The New Yorker. At that time, The New Yorker had mostly phased out the editorial practice of having staff cartoonists illustrate caption and concept submissions by other contributors, but it still occurred sometimes. Cartoon editor James Geraghty brilliantly tasked Addams with this one. It was only later that year, when Lee Lorenz joined The New Yorker and invited Ziegler to contribute his own work, that he became a regular cartoonist.

Could we deconstruct this Addams Poe cartoon? It strikes me that it’s much more intelligible and straightforward than other cartoons from The New Yorker…

I hesitate to answer this because I feel like the more you analyze a cartoon, the less funny it becomes, but I’ll take the bait. [Laughs.] Ziegler and Addams knew that Poe’s The Raven is one of the most famous poems ever written. Its tagline is seared in everyone’s brain, and Poe’s likeness is well known. Therefore, it would have immediate recognition and wide appeal, especially to a cultured readership like The New Yorker‘s. We imagine famous authors to be confident in their work, and, in fact, Poe wrote about the creation of The Raven a year later in his essay, The Philosophy of Composition, explaining that he went about it very methodically and logically. So we can’t possibly imagine that Poe had a moment of doubt or ever considered any creature other than the now-iconic foreboding black harbinger of his spiraling descent into madness. Marry that with Addams’s inimitable skill at depicting anxiety and torment, and there’s the core of the genius. Then you look at the hilariously unsuitable choices Addams showed the exhausted poet contemplating–a basic farmyard pig, a giant, ungainly moose, and a morbid, gormless looking turtle–and it becomes the most hysterically funny thing.

He was a genius with the details. I love the crumpled up piece of paper on the spare table and floor–what animal choices they contained, we can only imagine. His fingers barely grasping the quill pen from his limp arm resting on his thigh, and the totally dejected look on Poe’s face, are priceless. I also like how something as simple as his excluding the exclamation point after “nevermore” drives home the failure of its delivery. Addams also loved combining animals with gothic themes. He married his last wife, Marilyn, who was known as “Tee”, in a pet cemetery at their home and that is where their ashes are both interred, along with those of all their pets. And Addams was known to be an impeccable draftsman. His editors all remarked that he often handed in his cartoons in a perfect, finished state, with no edits needed. He nailed it nearly every time.

Is this the only instance in which Addams depicted Edgar Allan Poe in a cartoon for The New Yorker, or any cartoon?

No. While this is the best known of them, he created three more iterations of The Raven titled Occasionally, Once Again, and the last, in 1983, a lengthier riff on the bird’s refrain, Carnivore, either-or, blood & gore…etc. He likely considered Poe a kindred spirit of the macabre.

I have to admit, when I saw this Addams Poe cartoon in the catalog, I stopped dead, my jaw dropped, and I think I even pointed at the screen. Was that your reaction when you first learned of its existence?

I’m so glad you jumped on this, like you jumped on the Gorey cat. It’s a famous Addams piece, so my first thought, which happens with similar iconic Addams cartoon submissions, is that it may be one in a series of reproductions that were printed on watercolor paper with Epson Ultrachrome ink. If someone sends a low-resolution JPEG [of a piece of Addams cartoon art] and does not give dimensions, they can fool you on first glance. I had the same reaction when a consigner approached us with the famous Movie Scream cartoon that we sold in 2017, which brought $31,200.

What condition is the Addams Poe cartoon in, knowing it was created as a piece of functional art, and not to hang on a wall?

Quite excellent, really. It was lovingly cared for, framed early on to protect it, and was never exposed to direct light, so the ink is strong. The back has some abraded paper and its The New Yorker stamp is a bit yellowed and frayed, but that adds to its charm, I think.

What is the provenance of the Addams Poe cartoon?

It belonged to Dona Guimaraes, who was a New York Times Magazine home section editor, an executive editor of Mademoiselle magazine, and a friend of Addams, who bequeathed it to current owner, a close friend of hers. It has never been on the market.

What is the Addams Poe cartoon art like in person? Are there details or aspects that the camera doesn’t quite catch?

The size of it is impressive– 20 inches by 13 inches, which is on the larger side of some of his work. You can also see the brush work on the board, and the care he took with the areas of shading through ink and wash. When you face a work like that in person, head on, it comes at you with even more force. I’m always encouraging people to collect original cartoons because even though the caption and image are digested at first sight, seeing the medium on the surface and picturing the illustrator creating it adds a special element that connects a person to the artwork. That experience isn’t unique to engaging with fine art.

How often do original Charles Addams cartoons for The New Yorker come to auction?

I’d say about a dozen, on average. These generally consist of cartoons, doodled autographs, and covers for The New Yorker.

Could you quantify it?

I’d say 50 percent or more. To be specific about it, cartoons for other publications that contain characters that resemble the Addams family tend to bring more. Cartoons that don’t contain them don’t bring as much.

How did you arrive at the estimate for this Addams Poe cartoon? What did you look to as comparables?

I looked at the results for other large-scale cartoons for The New Yorker that were also among his most recognizable. I also considered the condition, the provenance, and the fact that it had never come up before. I am generally conservative in my estimates, believing that the auction process will allow works to find their level. I like to attract, not prohibit participation. I’d love to see this reach the level of Movie Scream, though I doubt it may reach the record price set by Sad Movie, a 1946 cartoon for The New Yorker that sold for $40,630 in 2012.

Why will this Addams Poe cartoon stick in your memory?

Because it’s a perfect example of Addams’s genius. I had taken a bunch of close-up images of it for a condition report on it for a client. I was at my computer screen, looking at an enlarged, high resolution image of the pig’s face for about the 200th time, with the classic Addams deadpan dot eyes, and I started trembling with laughter, for the 200th time. And because books are fundamental to Swann’s founding and history, an Addams cartoon with a literary theme just gets me where I live.

Collecting the Works of Women Illustrators 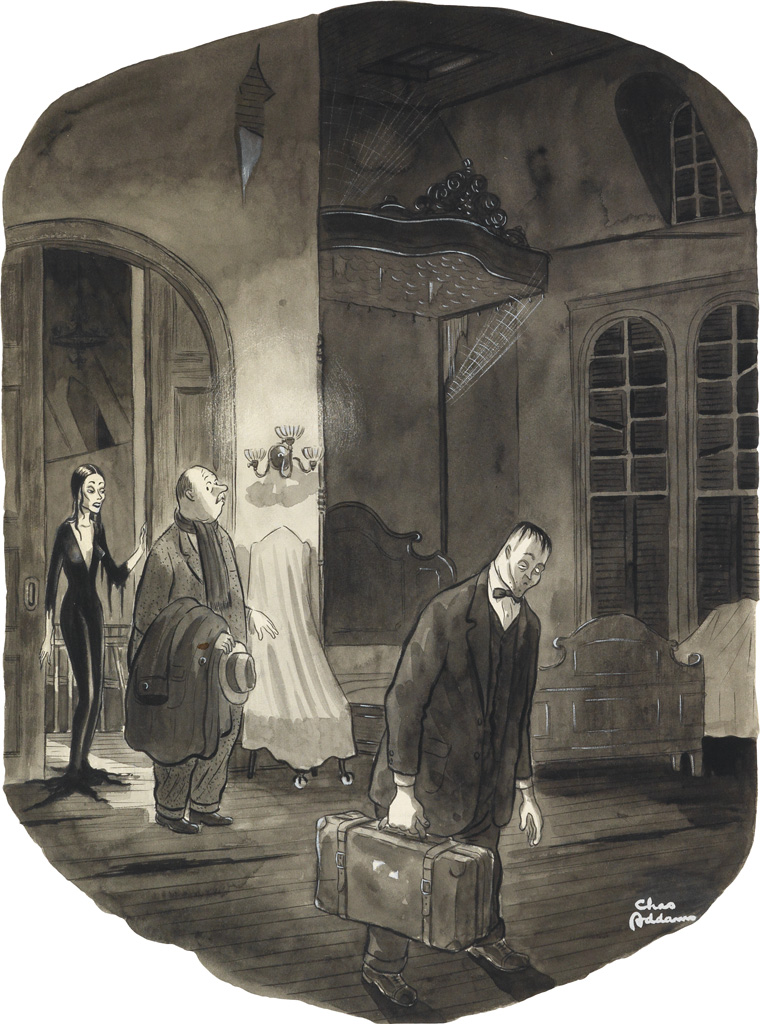