Personal correspondence and manuscript material are always a highlight in our auctions of Printed & Manuscript Americana. On April 12, we’ll be offering a selection letters from Thomas Belknap, a clerk from Newburgh, New York, who enlisted in in the Union Army in February 1862 and was shipped out the next month aboard the steamer USS Octorara to blockade Confederate ports in Virginia. His messages reveal the trials of daily life as a young soldier in the Civil War. 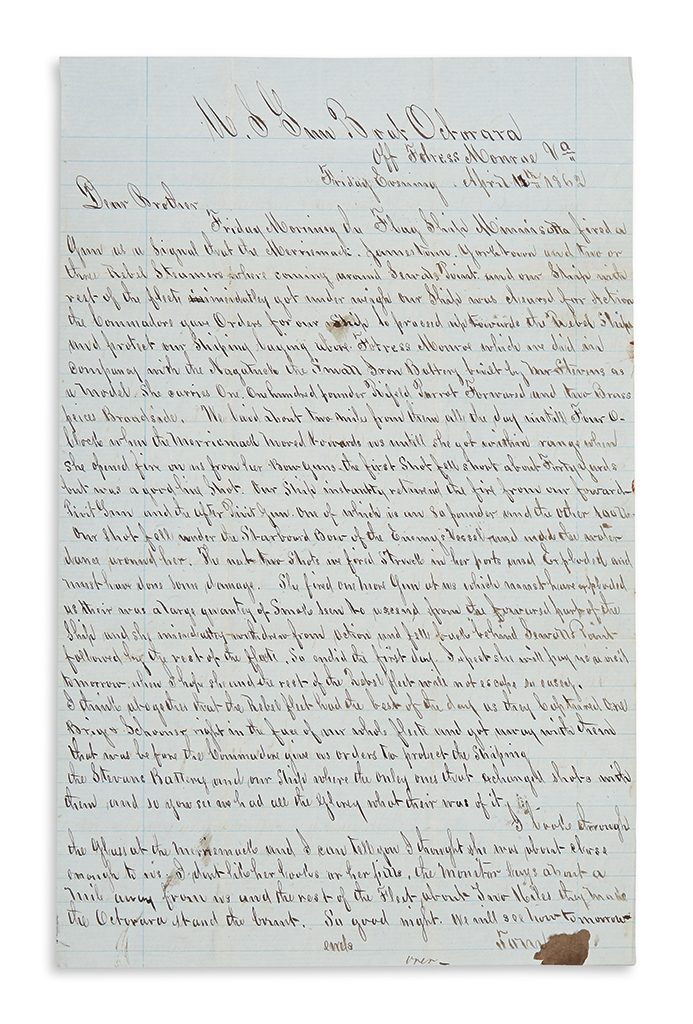 The earliest letter offered, which dates to 1862 and was written off the coast of Virginia, describes a rare close encounter with the Confederacy’s most widely feared vessel, the ironclad Virginia, better known as the Merrimack. Written just a month after the Battle of Hampton Roads, it also gives a mention to the USS Monitor, the nemesis of the Merrimack. 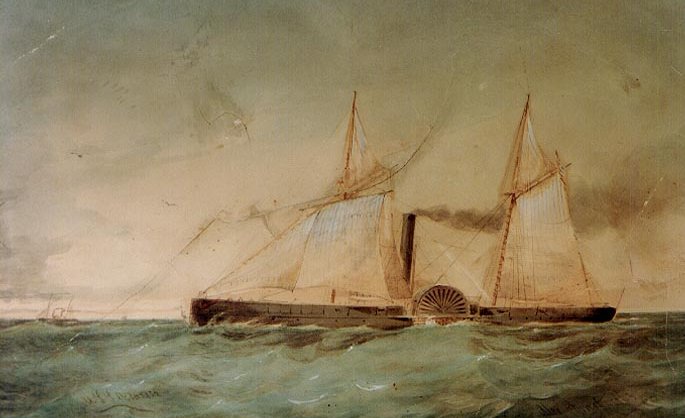 Belknap was a thoughtful letter-writer and presumably an able sailor, but he was not a gifted speller. In another lot in the sale, a letter reads, in part: “Friday morning the flagship Minnisotta fired a gun as a signal that the Merrimack, Jamestown, Yorktown, and two or three rebel steamers where coming around Sewal’s Point. . . . We laid about two miles from them all the day untill four o’clock when the Merrimack moved towards us untill she got within range, when she opened fire on us from her bow-guns. The first shot fell short about forty yards, but was a good line shot. Our ship instantly returned the fire from our forward pivit gun and the after pivit gun. . . . Our shot fell under the starboard bow of the enemy’s vessel and made the water dance around her. The next two shots we fired struck in her ports and exploded and must have done some damage. She fired one more gun at us which must have exploded, as their was a large quantity of smoke seen to ascend from the forward part of the ship, and she immediately withdrew from action and fell back behind Sewall’s Point. . . . I expect she will pay us a visit tomorrow, when I hope she and the rest of the rebel fleet will not escape so easey. . . . The Stevens battery and our ship where the onley ones that exchanged shots with them, and so you see we had all the glory, what their was of it. I looked through the glass at the Merrimack and I can tell you I thought she was about close enough to us. I don’t like her looks or her pills [pillbox gun turrets]. The Monitor lays about a mile from us, and the rest of the fleet about two miles. They make the Octorara stand the brunt.”

Belknap had to wait another two days to post the letter, during which time he added: “They went to get our ship under weigh this morning and found her hard aground. . . . They have discovered by the glass that the Merrimack is in the same fix as ourselves.” The CSS Virginia would be scuttled just a month later, making this a rare first-hand account of direct engagement with the ironclad. 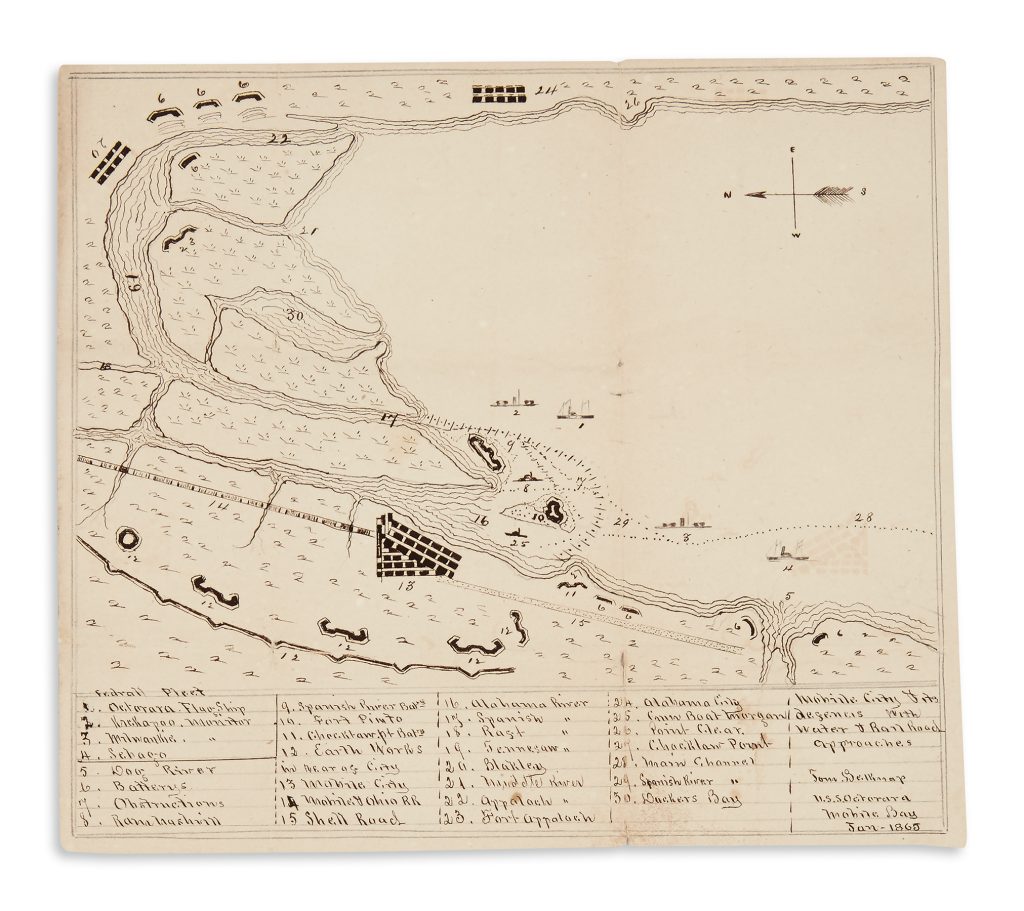 The Octorara in Mobile

We next hear from Belknap off the coast of Mobile, Alabama, still on the Octorara. He was 20 years old. He continued to write regular letters to friends and family in New York in the months following the Union victory at the Battle of Mobile Bay. Mobile had not surrendered, but the Union Navy maintained a tight blockade. In the first letter on 24 September 1864, Belknap describes the surviving Confederate defenses. In addition to forts and batteries and a fleet of three ironclads, “the obstructions consist of sunken vessels and piles driven down so their tops are below the surface of the water some three or four feet, and having in their tops bars of iron sharpenel so as to penetrate any wooden ship that should attempt the passage. . . . The place is well-defended.” The Confederates are also “strewing the channels with that most cowardly weapon of war, torpedos, in which they seem to have a great deal of faith since the sinking of the monitor Tecumseh.” The Octorara is regularly taking in “deserters & refugees . . . black & white, male & female, kind of an assortment of colors & sexes.” 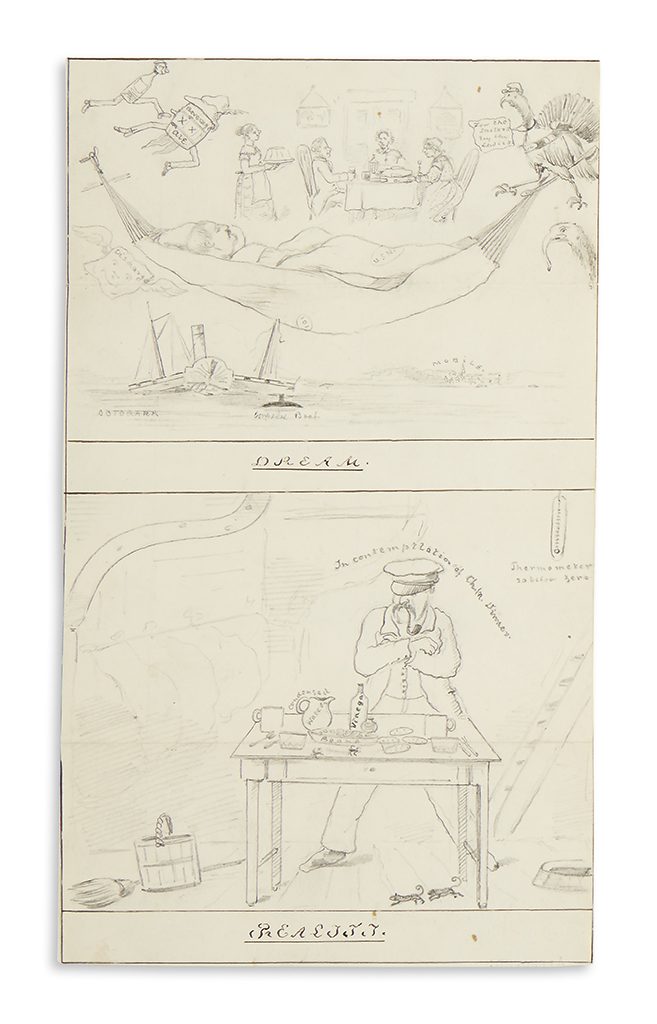 The 7 January 1865 letter offers Belknap’s “State of the Union” summary and local news. The USS Narcissus, “which the Johnnies so kindly sunk for us with a torpedo, has been raised and is now undergoing repairs.” He also regretted the poor quality of his Christmas dinner: “We waited & waited in vain for the appearance of the advance guard of the turkey brigade, but nary a turkey or turkey’s wife did this youth see. It is many a long day since I had the pleasure of putting my mastications in the plump leg of a gobbler.” Belknap enclosed with this letter an amusing cartoon captioned Dream / Reality. He lays in his hammock while turkeys, ale and his discharge papers fly about his head, while the Octorara steams past an ominous torpedo boat. Reality was represented by a scowling mess cook laying out a table of bread, vinegar, vermin and “condensed water.” 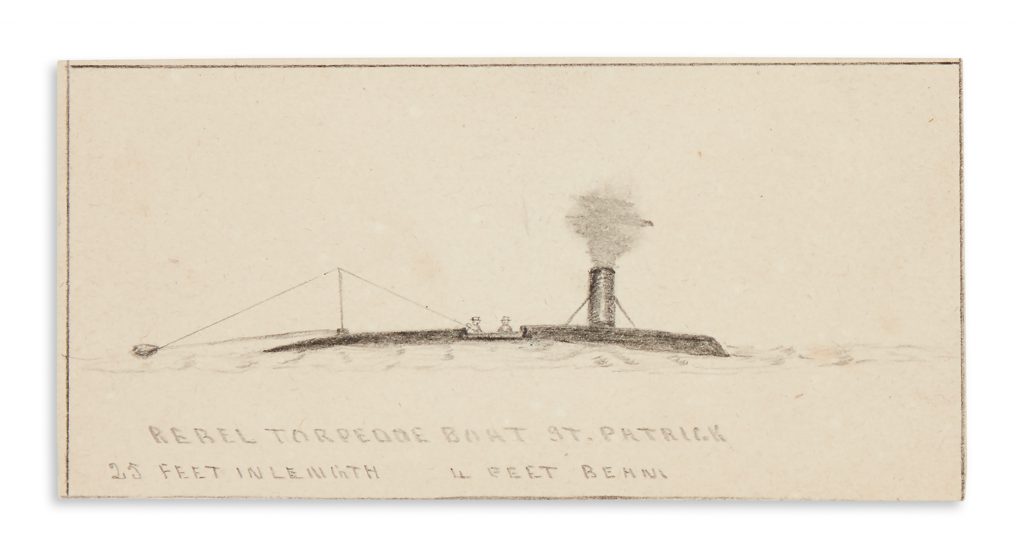 The Octorara vs. a Torpedo

The 1-3 February 1865 letter describes the Octorara‘s encounter with a torpedo boat: “One of the lookouts stationed aft discovered some dark object on the surface of the water which through the darkness resembled one of the many dugouts or canoes which the refugees are in the habit of coming off to our ship nightly in. . . . In a moment the boat struck us right about the after gangway, but by some stroke of good fortune the torpedo failed to explode. . . . One of our sailors boldly jumped down on the gangway ladder and seized the torpedo boat with both hands by the smoke stack braces and partly careened her over.” The boat made its escape without causing any damage. “We presume it is the one that the Johnnies call the St. Patrick. She is twenty-five feet in length, four feet beam, partly segar shape, made by iron, bullet-proof & generally carries three men.” In addition to Belknap’s own sketch of the St. Patrick and vivid description, an engraving of the event was published in Harper’s Bazaar. 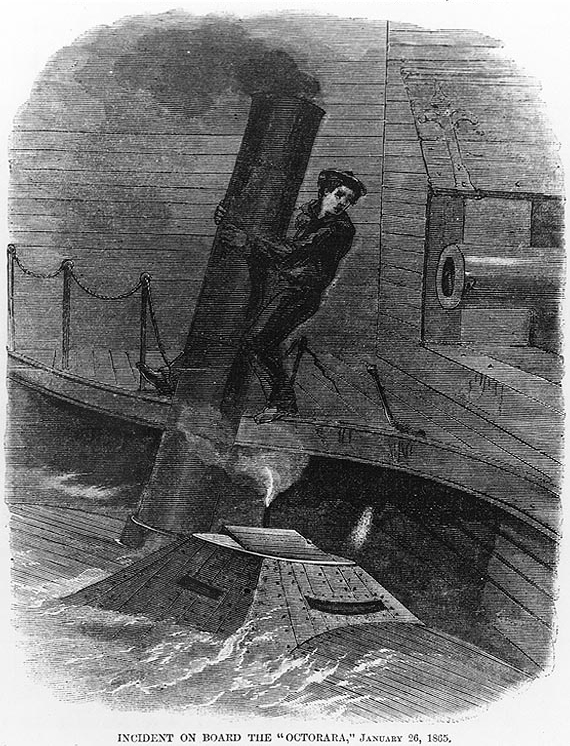 Incident on board the Octorara, January 26, 1865, engraving for Harper’s Bazaar. Courtesy of ibiblio.org.

The final letter in the collection is dated 28 May 1865, after the fighting had ended. Belknap describes a massive explosion in an arsenal which had flattened much of Mobile’s harbor three days previously: “Our ship was laying within 300 yards of the building in the stream directly opposite to it. The force of the concussion knocking down the largest part of those on land, at the same time the air was filled with exploding shells. At one time I should judge there where at least five hundred shells exploading over and around our ship. . . . From a half to a mile from the explosion there is hardly a building but what has suffered damage. . . . Thousands of men worked hour after hour among the debris, and brought forth one after another of the writhing and dead victims, some had legs blown off, some an arm, some with heads cracked and some in such a condition as to present anything but the semblance of human beings.” Some 300 people were killed in the explosion; the massive depression remained in the ground for years afterwards, and much of the northern part of the city was destroyed. The cause was never determined. 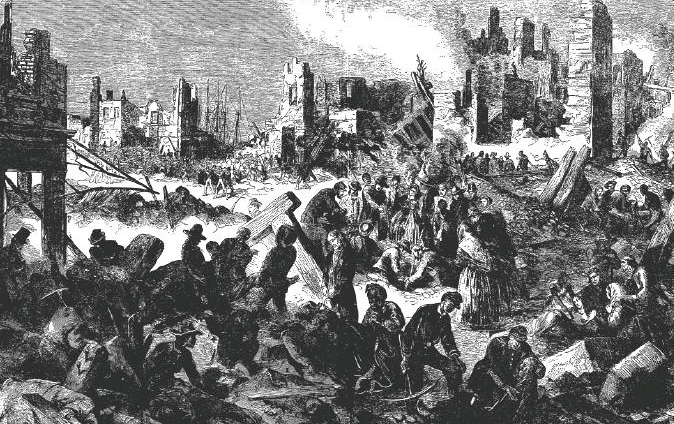 Engraving of the aftermath of the explosion in Mobile, Alabama, in which an estimate 300 people died. Courtesy of Alabama Pioneers.

This lot also includes two of Belknap’s sketches of Mobile Bay, and a photograph of a third. One dated January 1865 is titled Mobile Bay & its Defences, with Water and Railroad Approaches, and includes a key with 30 points described, including the location of each ship in the Union fleet. As a whole, an eventful and visually appealing record of the Union blockade of Mobile. 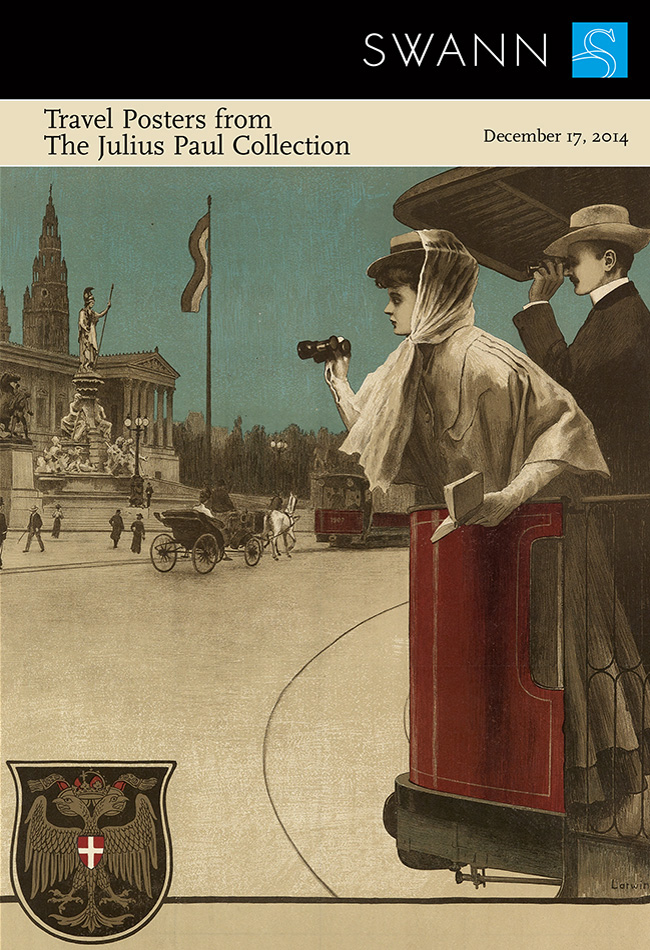 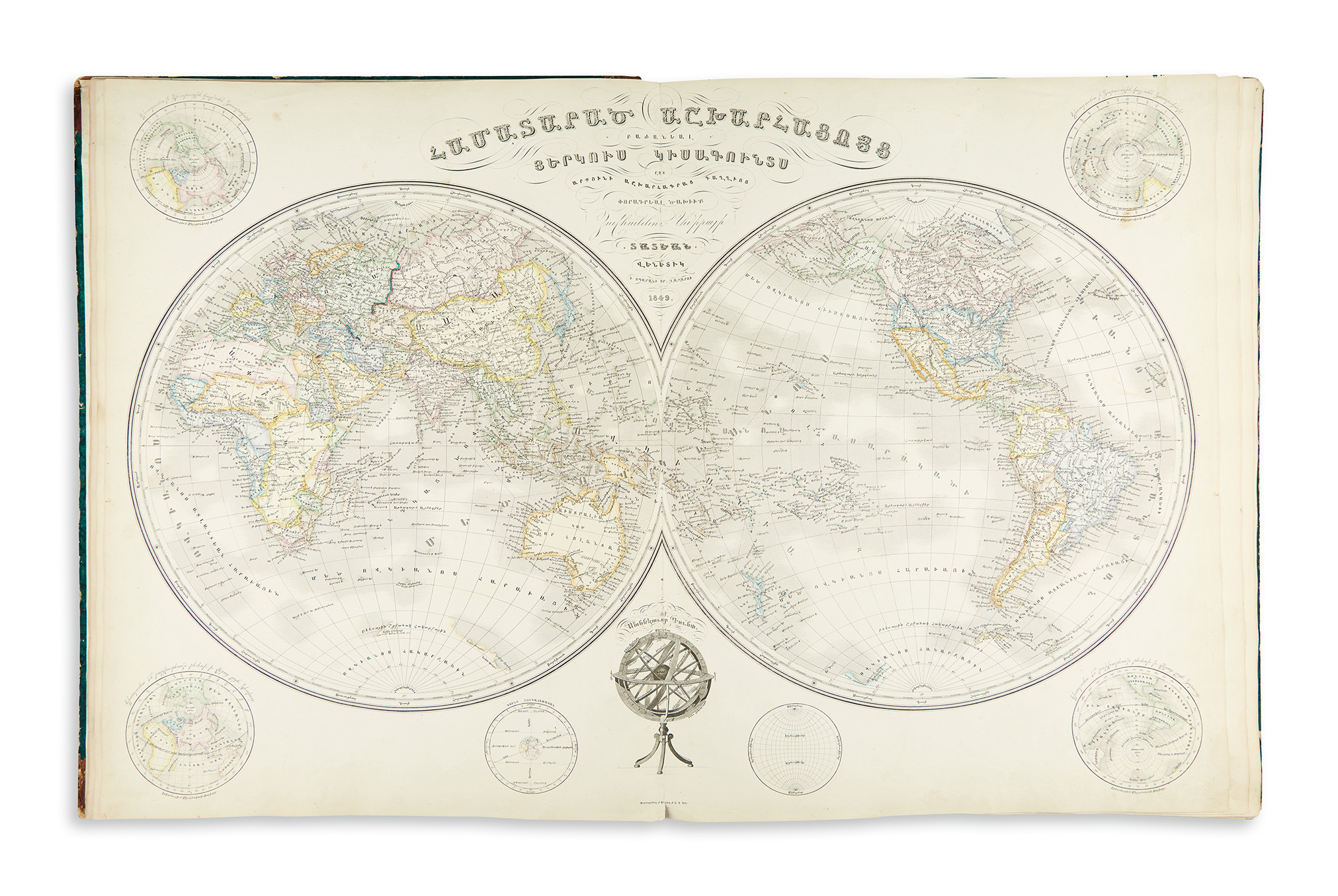 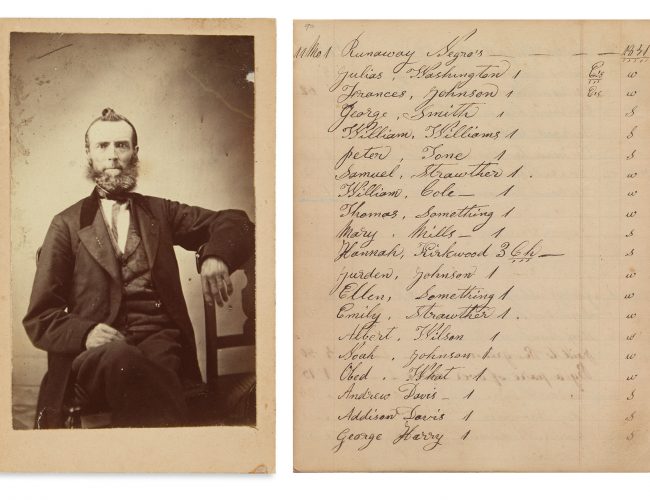